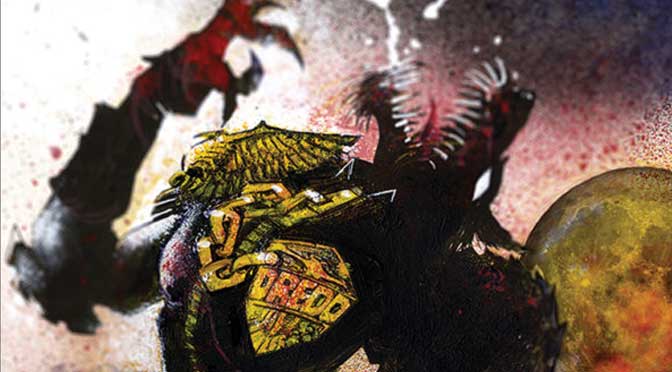 “Deviations” is a line of comic book single publications from American publisher IDW Publishing, in which well-established character properties are placed in “alternative reality” scenarios. IDW Publishing’s writers craft stories that address what would have happened if events were changed in established storylines, basically having the stories deviate at key junctions in order to lead to alternate conclusions.

The most recent property to be given the Deviations treatment is “Judge Dredd”. Dredd is a “Street Judge”, based in the post-apocalyptic Mega City One. Dredd serves as both a police officer and a draconian judge, thus allowing the capture, trying, and sentencing of criminals on the spot. There is a corps of Judges, of which Dredd is the most notorious. UK publisher 2000 AD Comics owns “Judge Dredd”, but has clearly (and curiously) licensed it to IDW Publishing.

“Judge Dredd: Deviations”’ lynchpin is a story called “Cry of the Werewolf,” which was originally published in 1983 in the pages of 2000 AD progs (issues) #322 to #328. “Cry of the Werewolf” focused on a werewolf invasion of Mega City One, caused by a fictional radioactive substance called Cassidium which mutates people into a beast. Dredd managed to destroy the pack of werewolves, neutralized the Cassidium, and killed the pack leader, but at the cost of being bitten and turning into a werewolf himself. The story concluded with the werewolf Dredd being caught by the retired and self-exiled Judge Prager, returned to the city, and cured of the affliction by a Judge named Cassidy.

“Judge Dredd: Deviations” deviates at this point, with Judge Cassidy dying at the hands of the werewolves before finding a cure, leaving Dredd stuck in his werewolf form. Due to the Judges’ respect for Dredd’s legacy of law enforcement, they forego execution and just resolve to keep him imprisoned until a cure is found.

The main twist in the story, discovered during an attack that destroyed the prison cells holding Dredd and other dangerous inmates, is that Dredd had enough willpower to keep the werewolf in check. The werewolf Dredd is still Judge Dredd. But Dredd is unable to speak. Dredd is however gifted with the enhanced abilities of a werewolf.

Like all of the “Deviations” one-shots, enjoyment of “Judge Dredd: Deviations” will rely heavily upon how familiar and invested a reader is in the original 1983 story. This presents difficulties for other readers. The issue of accessibility to the story is exacerbated as a consequence of an overall increase in the sophistication of modern readers. Many of the old stories from 2000 AD’s “Judge Dredd” title were a product of their time and will seem both niche and dated to modern readers. 2000 AD Comics was a breeding ground for many writers who eventually became famous names in the American comic book industry, including the likes of Alan Moore, Grant Morrison, Mark Millar, Garth Ennis, among others. The quality of the stories is not shabby. But many of the stories are raw and, further, written in Prime Minister Margaret Thatcher’s England, where bleak economic policies lead to expressions of anger and violence in comic book stories (witness Alan Moore’s depressed introduction to the anti-Thatcherist “V for Vendetta”).

Fortunately for new readers, writer John McCrea seems aware of the comic’s reliance on familiarity with the original storyline, so Mr McCrea has written a short text introduction in the beginning of the comic. It is enough to provide the backstory and to explain the relevance of the “deviation.”

Readers should nonetheless keep expectations for “Judge Dredd: Deviations” low. It is not awful by any means, and Mr McCrea managed to preserve the tone and feel of the original story (which is appropriate, given that he dedicates the comic to the late Steve Dillon, who was the artist for the original “Cry of the Werewolf” story). But, inevitably the story itself is merely a play on an established yarn. It plainly does not aim to break new narrative grounds.