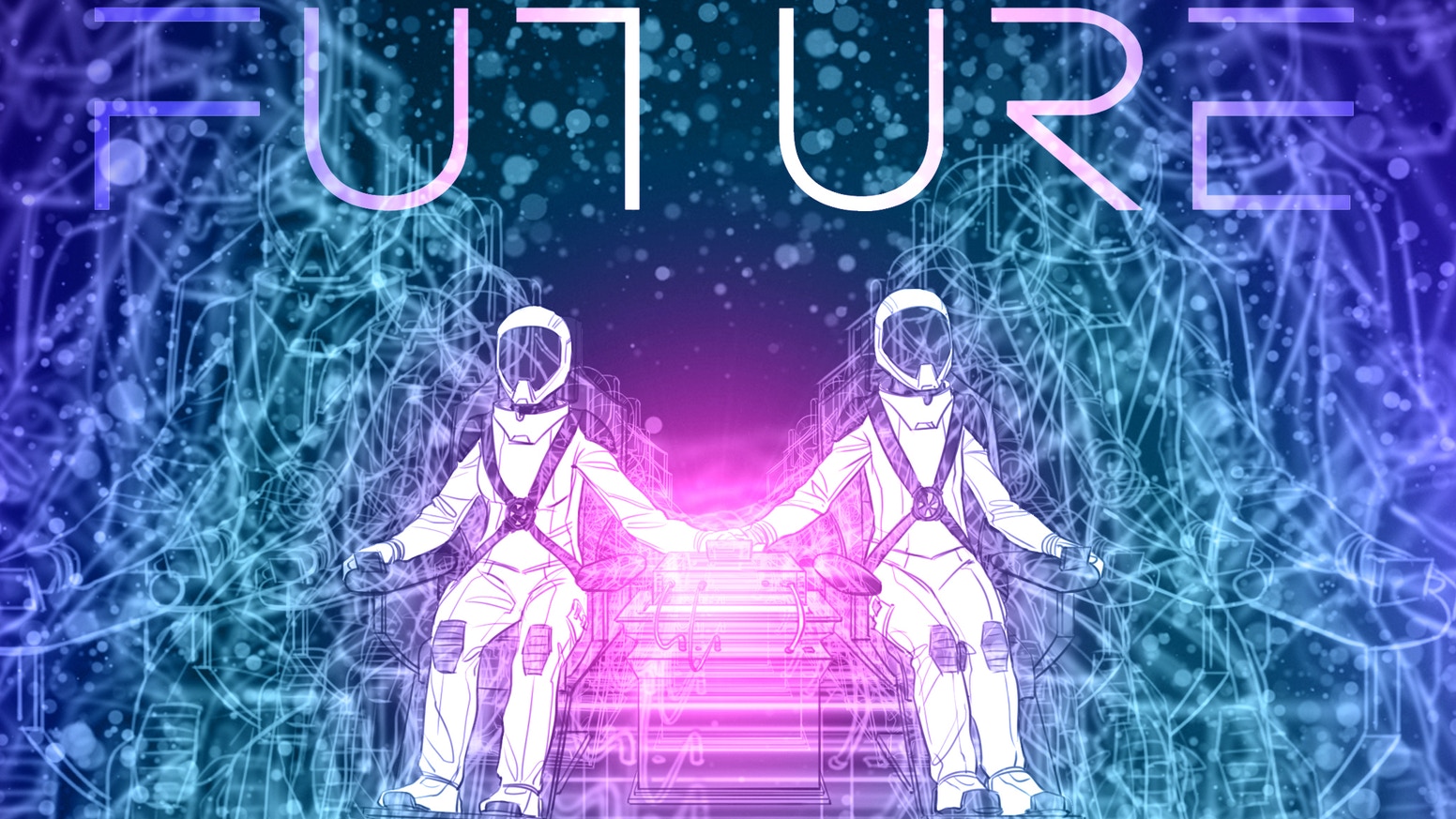 The most brutal moment in HG Wells’ 1895 novel, The Time Machine, is when the protagonist lands in the far future, and realised that all human life has passed. There is not even a ruin. All has swept away in the passage of time. As readers, we are confronted with the conceit of our species’ infinite perpetuation.

This excellent comic, Future, by Tom Woodman and Rupert Smissen, is much more confronting than Mr Wells’ novel. The two protagonists, Mur and Kay, travel from a future which is, perhaps, twenty years from now, to 317 years hence. The future of twenty years sees ecological breakdown accelerating and a consequential breakdown of polity: Britain’s government is dysfunctional to the point that scientists can engage in the unauthorised launch of a rocket. That rocket, using quark technology, enables Mur and Kay to travel forward to a time where the problems of the present have been overcome. It is a one-way trip but that information can be passed back.

But the mission is cargo cult optimism. The two protagonists find themselves in orbit around a dead planet. Disaster strikes and they crash near Norway. The sea is gone, and the landscape is littered with abandoned ships, a whale’s skeleton, and ruined cities. Looking at the driver registration documents left in a car, the two discover that Earth suffered environmental collapse only decades after they were propelled into the future. That arithmetic brings us to an apocalyptic fate around the year 2100. In other words, our grandchildren would not survive the end of the Earth. No doubt given Mr Woodman’s in-depth research this date is no coincidence – a study in 2017 concluded mass extinctions of animals and plants would occur at 2100 https://www.independent.co.uk/environment/mass-extinction-global-planet-start-year-2100-a7957886.html .

This was the Kickstarter promotional copy:

What is FUTURE about?

Murray Mielniczuk, the last astronaut, is dying. So is the Earth.

In a last-ditch attempt to save them both, Murray and her wife Kay are shot forward through time to find a cure and rewrite the story of the planet they call home.

But crash-landing in a barren future, they find themselves with no help, no ship, and no way back.

Future clearly gives more than a passing nod to the 2014 motion picture Interstellar. Fans of “feasible” sci-fi will enjoy Mr Smissen’s visuals of a UK space shuttle, the International Space Station-esque vehicle which projects the two forward, and the Svalbard mag-lev vehicle.

Mr Woodman’s skills are not confined to his plot creation and background research. We have several sequences of needle-skipping pages, in which Mur suffers from flashbacks and jarring delusion, which are written with finesse.

A short word on Mr Smissen’s art. It is crisp, innovative, and quite beautiful. We see Mur slowly succumb to her illness, and when we have a flashback to when she first meets Kay, her youth and vitality are startling. And the scorched earth is rendered with meticulous despair.

(It is ironic that a substantial part of the action is set at the Svalbard Seed Vault. It is built amidst the ice and in 2016 suffered from flooding caused by global warming.)

The ending is one of hope, and it is unexpectedly touching. Clasping hands, and a rescue which apparently took many years to achieve, suggests that there was a rethink of humanity’s careening path to mass extinction. It is a menace to the world’s viability that humans are doomed to live in the present and do not have more than academic insight into our own future. One of the wonderful things about the genre of comic books is the ease in which the imagined can be reduced to a visual. These images of the Earth dead in a mere 80 years are grim and should trigger much unease. Your reviewer knew his great grandfather, a World War One veteran. World War One occurred over one hundred years ago. But 2100 is only eighty years’ hence. The children of today will face their final years of life in a horrible dystopia. If Messrs Woodman and Smissen were out to create alarm, then they achieved it. We hope that this title has a very wide audience.