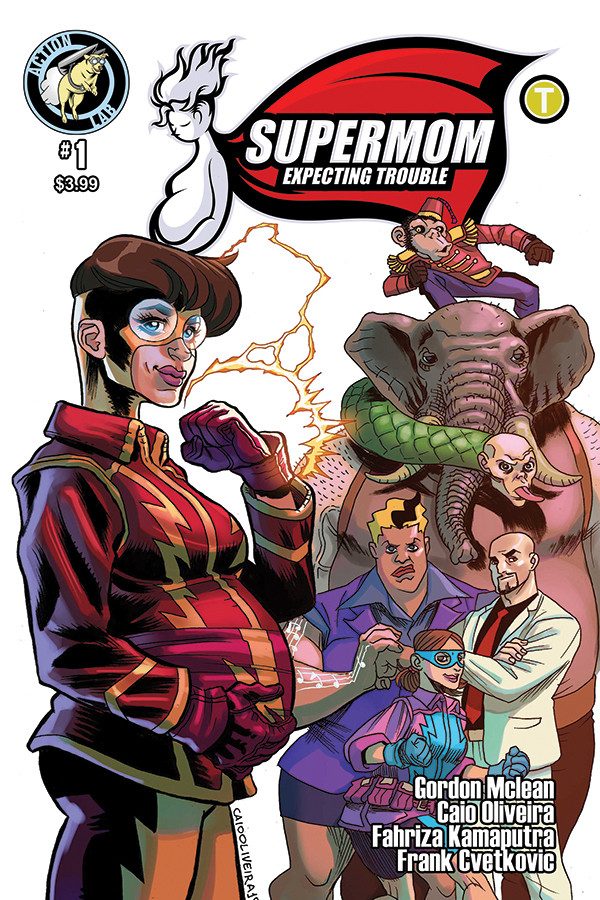 The superhero genre is a cavern almost completely excavated of anything of value. It is very difficult to discern any glimmers of gold left in the dark. So much of the material, with its parameters of good against evil, superpowers, ritualised combat, and fetished costumes, has been sifted through and sorted to such an extent that comic book readers, including your reviewer, has turned away to other genres for veins of originality.

It is this context which makes Supermom: Expecting Trouble #1 such an interesting find. The lead character, Voltra, is pregnant. Fortunately, Voltra is more or less invulnerable. Still, in fighting her villains, Voltra places not just herself but her unborn child in jeopardy. Is this responsible motherhood? Or is it the ultimate altruism? It is a gem of an idea. Superhero comics are typically about melee combat, the sort of scenario where a child in utero would be exposed to danger. It is an odd mix – a mother’s desire to keep an unborn child safe contrasted with the exposure to danger which comes about when a superhero puts on a mask.

Pregnancy generally is a rare enough concept in American superhero comics. The obvious examples include a very odd phase for Power Girl (a popular character lost in one of DC Comics’ egg scrambles of its mainstream continuity) in the pages of Justice League International in 1994, the evergreen Jessica Jones in Marvel Comics, a pregnancy by rape for Marvel Comics’ Ms Marvel for Avengers #200 in 1980 (astonishingly, the non-consensual aspect of this did not occur to the writers or editors at the time – see https://www.geekinsider.com/on-the-rape-of-ms-marvel/ ), and the Invisible Woman in Marvel Comics’ Fantastic Four in 1968.

We asked writer Gordon McLean for the source of his inspiration:

This was a story that pretty much just popped into my head fully formed while I was working on another comic: “There’s a female superhero. She’s pregnant. Her archnemesis is the father.” The idea of a pregnant superhero having to kick the supervillain dad’s ass and throw him in jail to make the world safe for her baby created so many fun ideas that I just had to write it, especially when you throw in all the extra fun and drama that comes from her family and fellow superheroes learning about and dealing with the child’s parentage. Then you throw into the mix the question “Who will the kid take after, the mother or the father?” and that takes on a whole other level of importance in Supermom.

The fighting side of things was something I was a little concerned about at the beginning. In the story world Voltra’s pretty much the most powerful hero on the planet so I hope that the readers see that, while she’s pregnant, each fight is really low risk for her (well, until a certain plot point later on…). Having dedicated her life to protecting the planet, Voltra’s struggle with taking a step back from that due to the pregnancy is also a big part of her character arc.

Mr McLean’s concepts would not be out of place in a title from much-missed imprint America’s Best Comics. The plot follows a nine-month path which is as old as humanity and is immediately accessible.

In addition to the questions raised by Voltra’s pregnancy, there are some other inspired moments in this first issue:

1. Voltra’s mother, perhaps the most intriguing character within the entire issue, has the best lines. After shooting a thug in the neck with a tranquiliser dart, she grumbles about not being allowed by her daughters to use real bullets. She is also deeply unhappy about Voltra being born out of wedlock – an expression of conservative morality which Voltra and her sister try to laugh off. On the other hand, Voltra’s mother makes Voltra a bigger costume to accomodate Voltra’s expanding baby belly. It is nuanced characterisation;

2. The villains, notably the Carnimals, are a lot of fun, and could just as easily have slipped out of the brain of comics writer Alan Moore. Artist Caio Oliveira does more than his bit to assist in this by striking and unique visuals of the cadre of villains. Each have their own look and feel, reminiscent of a group of demons called The Goetia from Mr Moore’s Promethea;

3. The gynaecologist’s war stories of dealing with the superpowered and pregnant: first, invisible children in utero, and then shapechanging children in utero. Both the concepts and the accompanying art are startlingly funny, and these panels are in our view the zenith of the issue. As with all sparks of genius, retrospect is easy, but nonetheless we ask the question: Why has no one thought of this before?

Some of the dialogue is a little awkward and cliched (“I sing the body electric!” says Volta as she causes lightning to leap about her), as the book finds its feet in execution and, plainly, suffers from the absence of an editor. The title of the comic itself also hasn’t been well-chosen – there is a webcomic called “Our Supermom” (https://www.corgipress.com/our-super-mom-1-a-family-matter/ ) which is for sale on Amazon. Such muddles interfere in Google search results and will affect sales. But from a plot and concept perspective, Mr McLean is exceptionally clever.