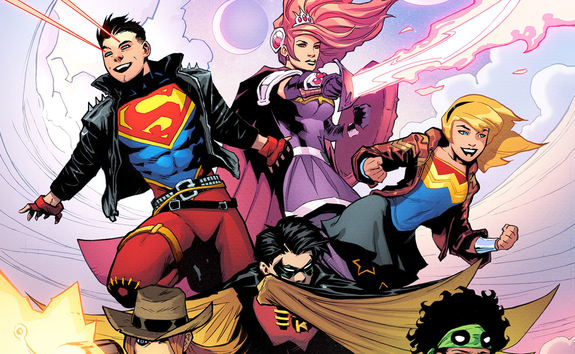 American writer Brian Michael Bendis appears to have been given both authorial and curatorial control over a new DC Comics imprint: “Wonder Comics”. This apparently might-hearted imprint includes the titles Naomi, Wonder Twins, Dial H for Hero, and this title, Young Justice.

It is fun but primarily for long term fans. This is obvious in several ways:

1. The introduction and the conclusion take us back to a 1980s title, Amethyst, Princess of Gemworld. This is an obscure fantasy title published between 1983 and 1986, with an ill-fated reboot under the title Sword of Sorcery between 2012-2013;
2. We also see the return of Impulse, a character whose adventures were published between 1995 and 2002; and
3. the Death of Superman era version of Superboy (the star of a title published between 1994 to 2002).
Fans of the characters might forget that it has been 17 years since Impulse and Superboy were cancelled – many contemporary readers would be ignorant of the history of these characters and may not have been born when the titles were published. Mr Bendis plays to an old school audience.

At the New York Comic Con, Mr Bendis said as much: “It’s literally a list of things people have been screaming at me to bring to DC Comics.”

Regardless, the title is indeed fun. New character Ginny Hex gets the best lines. Ginny Hex is the descendant of DC Comics’ brutal bounty hunter Jonah Hex (who had his own series, from 1977 to 1985, and again by creepy and kooky DC Comics’ imprint Vertigo Comics from 2006 to 2011. That recap omits a weird post-apocalyptic version of the character which was published from 1985 to 1987). Ginny is not grim: she is eccentric and goofy. But like her great-great grandfather, she is brave and a crackerjack shot.

In bringing back Connor Kent, a clone of Superman going by the name Superboy, Mr Bendis seems set upon sowing confusion. Recently, and controversially, Mr Bendis decided in the pages of Superman #7 to age Jonathan Kent, the natural son of Superman who is also called Superboy, from being around seven years old to around fifteen years old. With two Superboys of the same age floating around, Mr Bendis seems set upon obscurification. But superhero comics have never been good with an entry level audience.