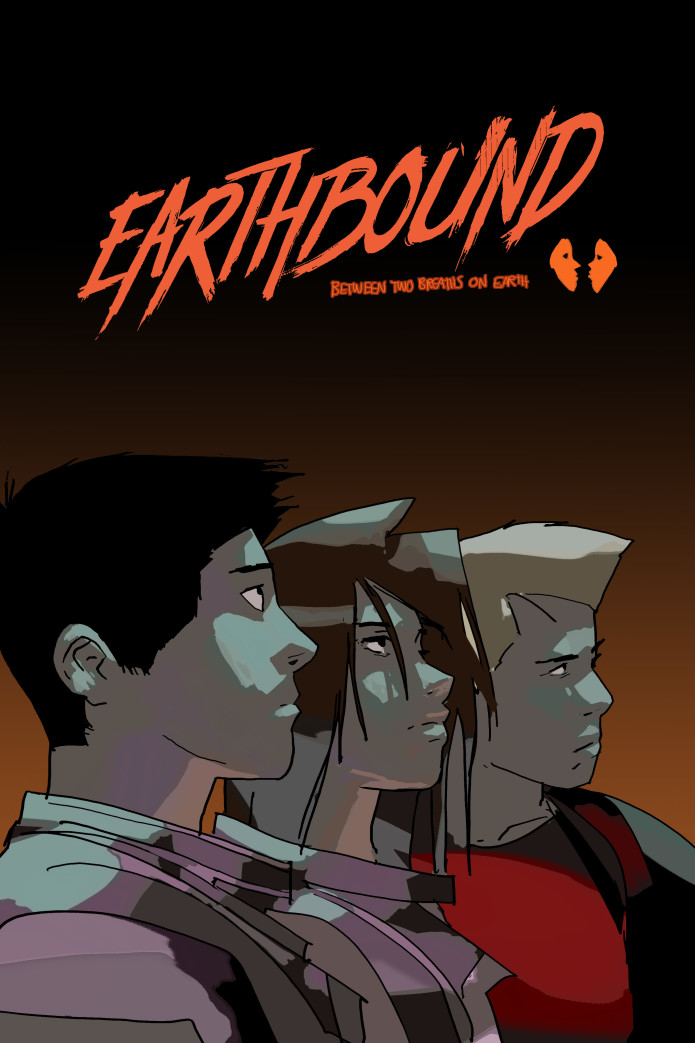 Written, drawn, coloured and letter by Narwhal (Per Berg)

This title has a grim premise. Two human mercenaries are periodically resuscitated from cryogenic suspension to perform deadly missions. They have spent the last four years in “stasis coffins”, the captives of aliens of the “Thirteenth Sponsor”. In this instance, the stakes are high: the winner of the pair will be given freedom if he or she can catch a group of four assassins, known as the Sirens of Violence – “well-known as blood-thirsty killers” – who have taken refuge on Earth. In the event of a tie of two Sirens a piece, the tie-breaker is the capture of a former colleague named Wiz Kid.

The mercenaries are armed with weapons called R-Type rifles which suborn the will of the victim, capable of creating an army of slaves without volition. One of the hunters, an amoral blonde man known as Spaceman, frequently sprays around his rifle and over time subdues a legion of humans to help him. His rival, the quiet brunette Julia, engages in targeted selection.

The entire exercise seems to be a type of sport: Julia and Spaceman perform “for the glory of the Thirteenth Sponsor” and “agents from other Sponsors could be afoot, so stay alert”.

Here is the promotional text from Narwhal Books’ IndieGoGo page:

In the Universe of Earthbound there are 13 Sponsors across the galaxy.  They recruit the greatest contenders on each planet and submit two every four years to the GGPT, Galactic Grande Prix Tournament. They hold a draft every year for an exclusivity contract, so other Sponsors won’t compete for the same contenders.  But once you draft a contender, you still have to go out and recruit them.  A subclass of warriors emerged to make a living specifically on the task of recruitment, known as headhunters.  Even headhunters are often compelled to do their job by blackmail and threats of punishment.  Freedom is not guaranteed, even Free Will is not guaranteed.

It sounds gritty. But, the comic is actually extremely funny. The action is for the most part incongruously set in a North American high school, not the expected location for a contest between highly capable alien bounty hunters.

It evolves that the Sirens of Violence are a diverse group of four female students, utterly inseparable. Tactically, Spaceman and Julia must get each of them alone. If any one of the Sirens is shot in front of the others, the Sirens’ collective wrath upon their hunters will be inescapable.

Spaceman does not halt for a moment for thought, and starts suborning everyone he encounters: Spaceman’s cohort consists of most of the school, the school principal (who wanted to know who on earth Spaceman was and why he was at the school, before getting shot), a policeman, and parents. There is one funny scene where Spaceman addresses a pool party – perhaps fifty attendees are part of his squad – and directs them to get enthused about the forthcoming prom.

Julia tags a bartender in order to have a drink with WizKid, and eventually, one of the Sirens by luring her out with the assistance of a well-hung swim captain. It is genuinely funny stuff. And with WizKid square in her sights, Julia decides not to shoot him, opting for a more interesting approach which suggests a solid backstory:

Julia’s and Spaceman’s alien masters are positively goofy. One is called Geoffrey and looks like a frog. Two of them contemplate the frozen Spaceman’s and Julia’s relationship, remarking how he cannot tell them apart by their gender (just as we cannot tell frogs apart) and noting the incongruity that humans have sex for recreational purposes. Julia and Spaceman are then defrosted, and marched off to receive their orders in some very striking visuals which underscore the humour in the dialogue:

Counting back, we have used the word “funny” or “funnier” four times in this review. The title is quirky, entertaining, and engaging. We find ourselves asking questions: what is Julia up to with her “sneaky shit” (as Spaceman puts it)? Why is WizKid on Earth, other than to play golf? Are there “agents from other Sponsors” about and if so, who are they? And will we see the Sirens cut loose? We look forward to answers to these questions, and very much look forward to the plot of Earthbound unfolding.