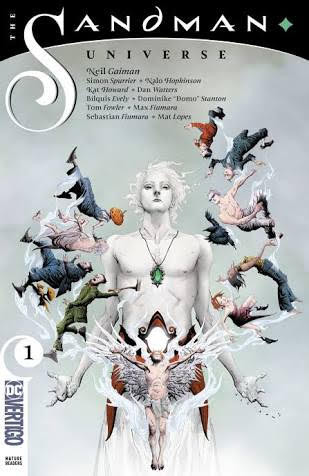 We were unapologetically unhappy with Neil Gaiman’s leisurely effort on The Sandman Overture back in 2015. We are very pleased to say that this new title, The Sandman Universe, is a correction in course.

American horror/fantasy imprint Vertigo Comics was a commercial success mostly because of Mr Gaiman’s work on the monumental (by American standards) epic which was contained in The Sandman (1989-1996). To a very significant extent, The Sandman made comic books acceptably mainstream to non-conforming adults, and also female readers.

Once that title concluded, however, the wind slowly went out of Vertigo Comics’ sails. Commercial and critical success visited the spin-off title Lucifer by Mike Carey (2001-2007), and also the unrelated series Fables by Bill Willingham (2002-2015).

But after those titles ended, the imprint ground to a halt. When foundation editor Karen Berger walked the plank in 2014, it seemed that Vertigo Comics was consigned to being a vehicle for increasingly more exotic and expensive reprints of The Sandman. The zenith of the title, whereby the funeral barge of Dream of the Endless sails down the Lethe with the main character’s corpse in his coffin, seemed to be a metaphor for the future of Vertigo.

The Sandman Universe represents a tangible investment by Vertigo Comics (and its owner, DC Comics) into its perpetuation. Luring Mr Gaiman back into the game even for a single issue, away from his lucrative career in novels and controversially expensive speaking events, must have made a dent in DC Comics’ treasure chest. DC Comics seem to have embraced the creative strategy of giving a writer curatorial oversight on a collection of related titles. Warren Ellis has been given the helm of the Wildstorm series of titles in a similar capacity, as we have previously discussed.

The story echoes the start of the first Sandman series. The current entity responsible for dreams, sometimes called Daniel, sometimes called The Sandman, but most usually called Dream of the Endless, has gone missing. The very colourful cast of characters who make up the staff of Dream’s castle, situated in a miasmic limbo called The Dreaming, are frantic. This is because strange and frightening black fissures and cube-like structures have started appearing in the fabric of the Dreaming.

Lucien, ostensibly Dream’s librarian but who fulfils the role of a major-domo to Dream, dispatches Matthew the Raven to locate their master. Matthew has a long history within DC Comics which we need not go into now, but is one of the title’s likeable and down-to-earth characters (despite having wings – apologies for the pun). Matthew follows the zig-zagged trail to Dream. It leads Matthew to various scenarios, all of which are the anchor points for the launch of the associated titles within the map of The Sandman Universe. We see:

1. future grand master of magic and Harry Potter inspiration Tim Hunter, in a perilous situation with a creature who has killed Tim’s teacher and somehow masked the corpse and pools of blood (the introduction to the plot of Books of Magic, to be written going forward by Kat Howard).

2. Lucifer, the fallen archangel, engaged in some strange rite to do with dissolution of his symbology. It involves the grim murder of carrion birds (the second relaunch of Lucifer, to be written by Dan Watters).

3. An American Gothic scenario of a godling named Erzulie assumes a role of intervention in the lives of some young girls from a disturbing crocodile voodoo spirit (to become House of Whispers, a title to be written by Nalo Hopkinson).

4. The continuation of the story of Dream, to be called The Dreaming, written by Simon Spurrier. It evolves by the conclusion of this issue that, like his older sibling Destruction, Dream may have quit his role as a fundament of the universe. The scenario with Destruction in the first series by Mr Gaiman was a pivotal storyline. It will be fascinating to see where this ends up.

(None of these titles will be written by Mr Gaiman, thus avoiding the astonishing delays we saw with The Sandman Overture. This might disappoint some readers.)

But, moving away from the story, look at the concluding pages of the issue. There is a Soundgarden-esque photograph which we find most amusing:

The writers on each of the titles coming out of The Sandman Universe, plus Mr Gaiman himself look positively morose. Is this because the titles are deliberately orientated to depressed teenagers, and so the crew were told not to smile as a study in counter-pretension? Or is the pay for perpetuating Mr Gaiman’s vision not so good? Mr Gaiman should be grinning, given his fee for this adventure, in essence captaining the relaunch of Vertigo Comics, must be formidable.