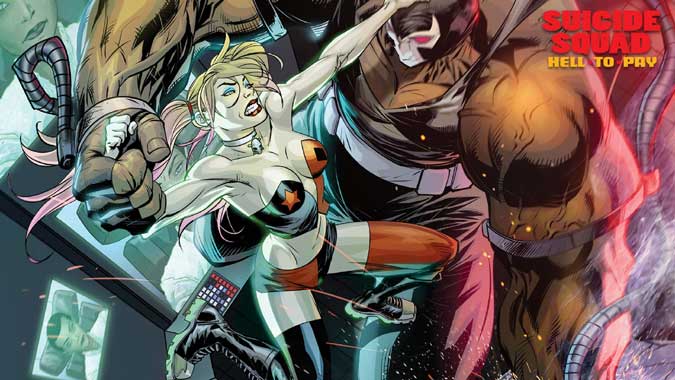 Suicide Squad: Hell to Pay is a new digital comic book series from American publisher DC Comics. It revolves around the government-sanctioned special operations team called the Suicide Squad, which consists of convicted super-powered criminals that perform covert operations for the government in exchange for commuted sentences. These criminals are kept in check by explosive neckbraces. The Suicide Squad brand is enjoying a healthy mainstream awareness outside of superhero comic books, thanks to the 2016 live action film adaptation.

While the title of the comic implies the participation of the entire group, and the cover features one of its most popular members – Harley Quinn – the group itself is notably absent. The first issue of Suicide Squad: Hell to Pay instead focuses on the group’s handler, the intimidating Amanda Waller (which we have featured before).

The comic tackles one of the defining traits of the character – the willingness to commit the most horrible of deeds for the greater good (or at least, her perception of the greater good). The main plot of this first issue deals with Waller visiting an immortal sorcerer, a character called Jason Blood. Waller wants information on a mystical (and literal) “Get out of Hell for Free” card.

It evolves that Waller is terminally ill. Acutely aware of all of the atrocities she has committed in her crusade, the character is perfectly aware that she is going to go to hell when she dies.

It may seem surprising at first that Waller would believe in the concept of Hell, given she is depicted as amoral, hard-nosed, and disinclined to Manichean notions of good and evil. But given the character’s historical brushes with DC Comics’ various supernatural characters, it would make sense that matters the readership might take on faith are proven facts in her fictional reality.

The “Get Out of Hell” card, despite the ridiculous appearance, is legitimate. It takes the form of a board game card because it magically adapts to the time it exists in. Blood uses his powers to show that at some point in the past, the card has taken on the form of a coin with runic inscriptions.

Unfortunately for Waller, Blood reveals that the “Get Out of Hell” card is already used up, most likely by one of its previous owners. The saving grace comes in the form of information from Blood on the existence of another mystical artifact with a similar function. The only catch is that it is more difficult, if not impossible, to find and attain.

Peripheral to this plot thread is that Waller is followed by the character called The Spectre. This character is a pale, hooded entity that functions within the DC Comics’ continuity as the all-powerful Spirit of Vengeance. This entity’s purpose is to hound and brutally punish those it deems truly wicked. Given Amanda Waller’s history and her terminal illness, it is not a mystery as to why The Spectre is shadowing her.

Despite the absence of the group that the comic’s title is based on, Suicide Squad: Hell to Pay #1 is still a great read. There is a dearth of action scenes but there is very solid plot building, and a little bit of humor thrown in. It also offers a good look at Amanda Waller at her lowest, showing that the woman who would in her righteousness stare down Superman has the capacity to feel fear. It also avoids the trap of setting Waller up as a sympathetic, ultimately altruistic character, merely because she is suffering from a terminal illness.

The addition of supernatural/mystical elements in the story is also interesting, given that Suicide Squad’s stories mostly stayed far away from the mystical parts of the DC Comics’ universe. This is reflected in the story itself, with Waller noting that the last time they had anything to do with the mystical side of things was then they recruited a troubled witch named the Enchantress, and it only led to trouble (indeed, that occurred in a 1989 Suicide Squad story and underpinned the motion picture’s plot). The Suicide Squad’s members are also generally ill equipped to deal with enemies that are mystical or magical in nature, yet the trajectory of the story points to an eventual confrontation with DC Comics’ most powerful mystical entity.

It is also worth pointing out that this comic is a sequel to an upcoming direct-to-video animated film, which bears the same title. So any Suicide Squad fan who is going to watch the video would do well to pick this comic up as well, setting aside our cynicism about cross-media tie-ins.