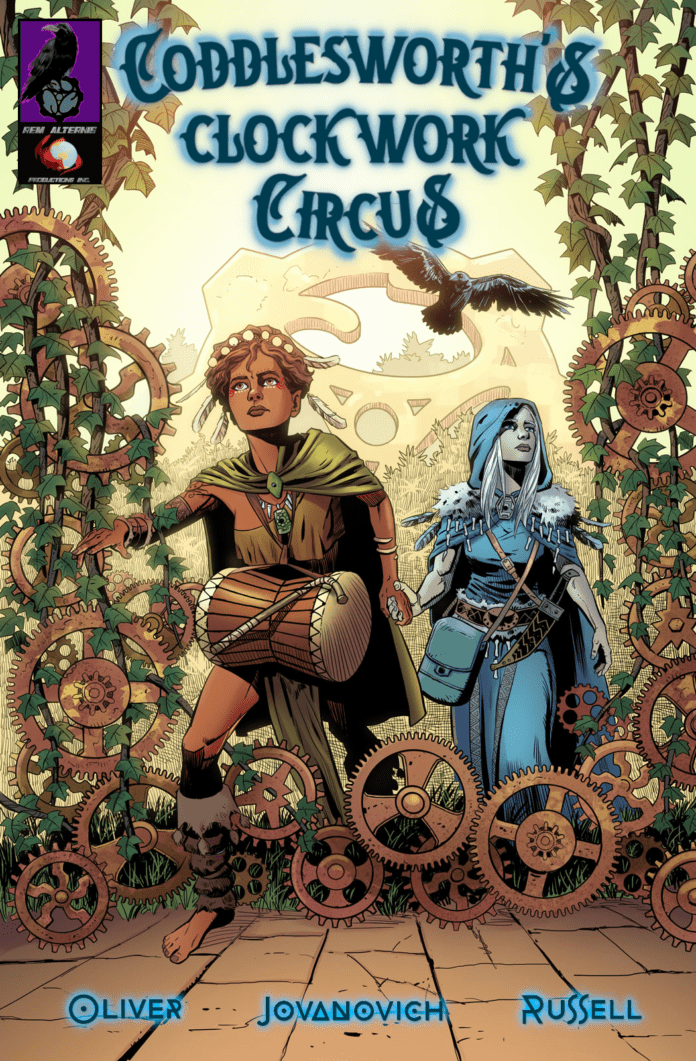 Fantasy epics are not known to intersect with steampunk. But that is precisely what the creative team of Coddlesworth’s Clockwork Circus set out to achieve.

Here is the pitch from the Kickstarter page https://www.kickstarter.com/projects/clockworkcircus/coddlesworths-clockwork-circus-a-steampunk-adventure:

When the Tempest—an impenetrable storm spawned by the Great Cataclysm more than three thousand years ago—suddenly dissipates, it reveals a massive continent untouched by modern technology. Simultaneously, arcane energies long discounted by science now permeate the world, giving rise to practitioners of magic and bringing to life a variety magical creatures and hazards.

Even as adventurers, scientists, and prospectors rush to explore this new continent, two young halflings begin their own journey outward.  Their quest is to find the truth behind a dark legend. Since those truths could not be found in the mystical heart of their native lands, then the answers must exist beyond… into a world they never even dreamed of.

Their travels take a fortunate turn when they are befriended by a troupe of circus performers, traveling the world in their… modest… airship to bring their show to the four corners of the known world. A series of dangerous events soon prove that the two diminutive women are onto something. But once adopted into the circus, their new family refuses to back down and together they unravel the mysteries of the Cataclysm.…

In the ensuing dark ages following the apocalypse, history prior the Great Cataclysm was forgotten and the source of the disaster was lost to time. The Tempest, a raging storm of corrosive energy, swirled between the two great oceans, never moving, never wavering. Orc pirates infested the waters around the storm, making sea travel through the southern hemisphere a dangerous proposition.

With no proof of the mystical, of the arcane or spiritual, many societies became secular, though the dragonborn still venerate their old gods. A technological boom over the last century has changed the world, making it less vast as it once was. When the Tempest suddenly, and without warning, simply… ended… the world was dumbfounded to learn of an entire continent–Ehlum–hidden behind it. Additionally, magic persisted in this newly revealed land, and with no more storm to contain the energies, expanded to all of Kealaphus.

Most of this is not at all apparent from this first issue. Instead we are introduced to the gritty and dangerous but nameless port city, and to the main characters Imari and Drum.

The detail in the art is very impressive, and we found Mr ‘s Jovanovich’s facial expressions especially engaging. This is not so much with the protagonists, who have elfin features and for the most part grimaces, and but instead with the background figures: the scowling assassin being offered a job by a man carefully holding out a small payment; the thieves in the tavern nudging each other when they see Drum’s jewels; the trader scratching his jaw as he contemplates a purchase. Imari offers us an unnerved glance as she sees a prostitute luring in a mark. The little details bring life to even the least important players on the stage, and therefore it is intriguing that perhaps the most important of the characters (or, at least, those who seem to be the titular characters) are incapable of moving past their fixed ceramic smiles.

Much of the story of this first issue consists of a fight scene in a shabby cul-de-sac alley. It evolves that knives and clubs do not do so badly against sorcery. This interaction between the protagonists and some opportunistic thugs from a tavern not just acts as a hook to the reader through danger and action, but also underscores the emotional make-up of the two adventurers and demonstrates their magical powers.

We found the use of a drum to summon magic to be especially intriguing. A drum is not much of a weapon in fantasy comics – it cannot effectively block a barbarian’s sword or axe – but drums have a long tradition in human cultures of summoning spirits and recanting lore. Imari’s powers are more offensive and seem to border on some particularly brutal necromancy and mirror her dour personality.

In this regard, any parallels to the beginning of JR Tolkein’s iconic fantasy tale Lord of the Rings drops away. These characters only look like children. But they are not little bewildered Hobbits. In fact they are each formidable and capable. Little wonder that traversing through the port was not an obvious threat to either of them. There is an obvious feminist interpretation available to the text. Both are women, who wear shamanic make-up on their faces, and who tap into unseen powers to rebuff the threat of a male gang wielding clubs and other phallic weapons. Imari reminds us of Hecate, the ravenous moon goddess aspect of Artemis from Greek mythology. Imari has a raven named Diaka as a companion: carrion birds happily follow death and do not auger well for those who might cross Imari.

The clockwork characters are substantively introduced at the very end. They appear to be the means by which Imari and Drum will traverse Messrs Oliver and Jovanavich’s world, and we are expecting to see a rundown dirigible gliding over various unique civilisations at some stage in the next episode.

Steampunk is a fun genre. This iteration of steampunk is quite different from the alternate steampunk history of William Gibson’s and Bruce Sterling’s The Difference Engine (1990). This is instead an steampunk injection of cogs and brass pipes: an advanced technology which avoids electricity, plastic, and petroleum (save perhaps paraffin) but with no backdrop of British Victorian top-hat-and-chimney-sweeps culture. We confess, as ardent readers of steampunk comics, we have never encountered steampunk in isolation from the world of alt-Dickens and alt-Disraeli. We look forward to seeing how Mr Oliver navigates this strange new world, and how he balances that against a fantasy backdrop. It is a heady mix.

This Kickstarter project reached the baseline target within days of its launch, which having had the advantage of a critic’s preview is no surprise. It is fun, full of life and personality, and is the first step on what seems to be a meticulous exercise in world-building.