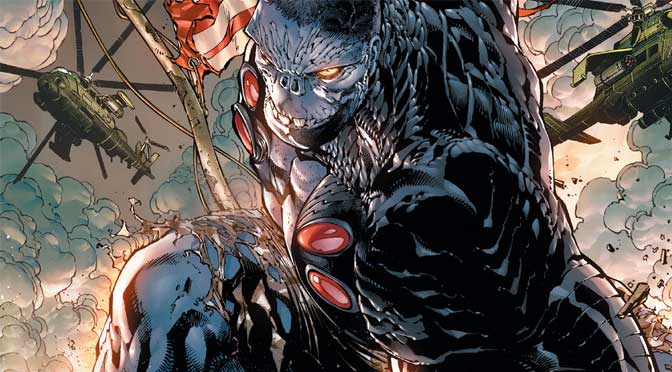 This comic is, put simply, about a character which is a blatant copy of the Hulk. We are tempted to leave our review at that. But we should elaborate.

Here is DC Comics’ promotional copy for the title:

Ethan “Elvis” Avery just wanted to serve his country. Instead, he’s been changed into a monster!

Tasked as the government’s own living, breathing, ticking time bomb, Ethan retains no control when the monster takes over. Cheaper than a nuclear warhead and twice as effective, Ethan fights to rein in the damage he unleashes when the beast inside him springs free for one hour a day. With everyone around him in danger, Ethan struggles to contain the DAMAGE he inflicts on the DC Universe.

The Hulk is a character owned by DC Comics’ major competitor in the American comic book space, Marvel Comics. The Hulk was created in May 1962 by Stan Lee and Jack Kirby and the character has been in continuous publication since that date. The Hulk was the subject of a popular television show in the 1970s, and has featured in several motion pictures (Hulk in 2003 and Incredible Hulk in 2008, and as a featured property in several other Marvel Studios films since). The character is a mainstay in Marvel Comics’ panoply of characters.

Copying occurs between the two comic book publishers, and has for a long time. The most famous examples of this are The Vision (Marvel Comics, October 1968) and Red Tornado (DC Comics, August 1968), both robot superheroes with very similar appearances, both created in the same year. Another example is the remarkable similarities between two titles, Doom Patrol (DC Comics, 1963) and The Uncanny X-Men (Marvel Comics, 1963).

DC Comics has a long tradition of litigation to protect its assets against copying by competitors. Notable amongst these was a 1941 dispute with Fawcett Publications over whether the red-costumed flying muscleman, Captain Marvel, was a copy of the blue-costumed flying muscleman, Superman, which lasted for ten years and resulted in the insolvency of Fawcett Publications. Comic book companies can sometimes takes these things very seriously.

Damage is almost identical to the Hulk in several ways:

a. The main character, Ethan “Elvis” Avery, transforms into an unstoppable, heavily muscled colossus and threatens urban areas and their populations while on a rampage. This more or less describes the Hulk for much of the character’s publication history.

b. The character is grey. At the time of creation, Stan Lee wanted the Hulk to have a grey skin tone, but the printing processes of the time were not able to effectively do this. Green was the fallback. But from 1995 to 1998 the Hulk was recast as being grey in skin tone. The grey colour makes the visual similarities between the two characters extremely obvious.

c. The Hulk’s comic book origin is that his alter ego, Bruce Banner, was caught in a military experiment gone awry: a prototype nuclear weapon explosion irradiated his cells. Early stories of the Hulk featured the character fighting soldiers and tanks as the US Army, under the command of the Hulk’s adversary General “Thunderbolt” Ross, tried to capture the character. Damage #1 features a military effort at containing Damage, and it becomes apparent from the dialogue that Damage was created by the military. As the Hulk was hunted by General Ross, Damage is hunted by a female military officer with an eyepatch, named Colonel Marie Jonas.

Setting aside the carbon copied concept and plot, there is nothing special about the dialogue which might have redeemed this title. It is filled with military terms, an effort at excitement by mystification:

“Deploy intercept team! Effect and get clear Major! Additional assets are in-bound! Stork-1 is going down! Intercept team is no go!”

Eye-rolling stuff, but it gets worse.

Damage’s rival to the role of Damage, Major Liggett, asserts during mid-combat dialogue (surely a term of art in superhero comics?) that he should have been the one to have been Damage:

“You never had what it takes! I’m the best soldier for the job. They should have chosen me! I should be Damage!”

And later, when Damage has smashed Major Liggett’s powered armour and abstains from killing his adversary:

Cliche is piled upon cliche.

DC Comics is currently experimenting with a number of new concepts, including The Silencer (which we have previously reviewed). We think DC Comics should be acknowledged for rolling the dice, and getting at least a little bit away from its stock characters and their variations of which have been the mainstay since the 1940s.