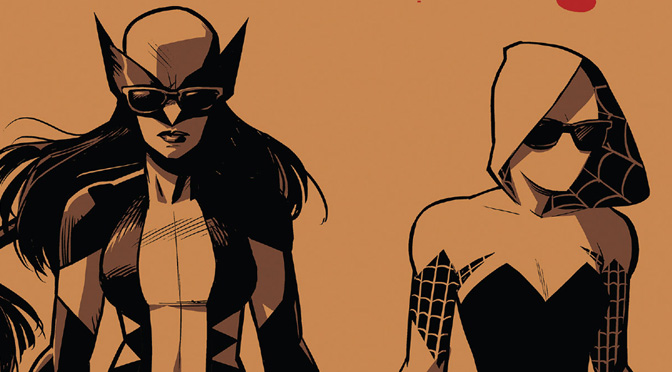 “All-New Wolverine” Annual #1 features a crossover between two Marvel superheroes, Spider-Woman and Wolverine, who are at the forefront of the American publisher’s All-New, All Different (ANAD) creative initiative. The ANAD initiative refreshes many properties by introducing replacements and variations of existing characters. In this case, the role of Marvel Comics’ iconic antihero Wolverine is assumed by a female clone of the character named Laura Kinney, and one of Marvel Comics’ most famous characters, Spider-Man, is replaced by a former love interest named Gwen Stacey, who happens to be from an alternate reality and has superpowers.

This new version of Wolverine is a genetically engineered, nigh-unkillable assassin. And so the light-hearted tone of the comic is unexpected but all the better for it.

It is a comedy of errors, in which the niece of a villain called Hornet endeavours to transport Wolverine to another reality, not knowing that the original male version has since been replaced. The mistake, coupled with bad timing, results in an odd plot twist: Gwen Stacy and Laura Kinney’s respective personalities are switched between their bodies.

After assistance from the alternate reality version of Marvel Comics’ ever helpful super genius, a character named Reed Richards, Laura (in Gwen’s body) manages to get back to her former reality and help Gwen (in Laura’s body) hunt down Hornet’s niece using Laura’s heightened senses.

Mr Taylor writes a fun story clearly meant for a younger audience. It is enjoyable to see Gwen and Laura struggle with their respective powers. Gwen in particular learns that there is a steep learning curve to Wolverine’s powers. This culminates in a scene where Gwen finds out the importance of pointing her fists away from her face before popping out unbreakable and razor sharp claws which are housed in the character’s hands and wrists.

Despite the presence of three young women possessing bleakly destructive capabilities, the story ends on a wholesome note. After the initial and genre-obligatory fight, the three characters managed to talk through their differences and we perceive a hint of a potential partnership between Laura and the new Hornet.

Unfortunately, despite the wit and quality inherent in the writing, “All-New Wolverine” is not recommended to readers unfamiliar with Marvel Comics’ publication-wide continuity. This is no fault of the writer. On analysis, the ANAD initiative is apparently supposed to target new readers by introducing new characters. But as proven in this comic, it fails because it is not a fresh start. Even substituted properties are still encumbered by decades of Marvel Comics’ messy continuity. There is a smattering of exposition as to why the new Hornet seeks revenge on the old Wolverine, but to the intrepid new reader it will not be enough. And the nuances of Gwen Stacey’s presence – a character controversially killed off decades ago – will also be lost.

Marvel Comics has embarked upon an interesting exercise with the ANAD experiment. But it should not be mistaken as path cleared of rubble.