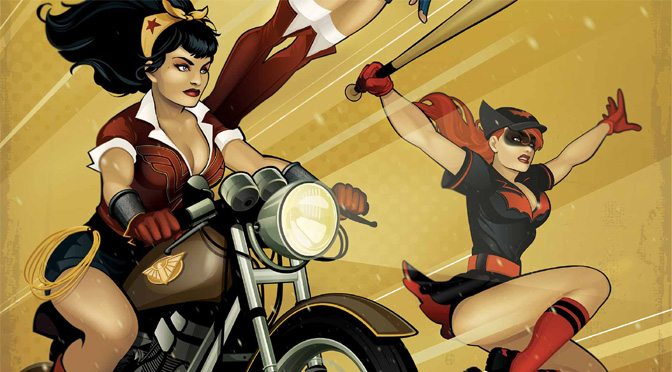 American publisher DC Comics have recently released a series of statues of some of its female characters under the brand “DC Comics Bombshells”, each with a bishoojo style appearance. “Bishoojo” is the Japanese word for “beautiful girl” and is a term used to describe characters of youthful, attractive appearance in Japanese manga. Bishoojo style has become increasingly sexual over the years. The DC Comics Bombshells statues themselves are a mix of sugary innocence and provocative sexuality, orientated towards a certain demography of collectors.

Which is why the first issue of DC Comics Bombshells is a surprise. DC Comics had, a few years ago, abandoned the World War 2 origins of many of its major characters and realigned its continuity for the 21st century. But DC Comics Bombshells takes the reader back to the 1940s. The writer, Marguerite Bennett, reasonably explains the focus on exclusively female characters in the book by noting that all men in the 19040s United States were at war (albeit an early war – Ms Bennett postulates a reality where the United States joined England and France in fighting Nazi Germany pre-Pearl Harbour). The story captures the 1940s nostalgia of Roy Thomas’ All-Star Squadron (1981-1987) but with more fun, and the sassiness of Dave Stevens’ The Rocketeer (1982) but with more class.

The first issue features Wonder Woman, two Russian characters who appear to be Supergirl and Stargirl, spymaster Amanda Waller (the very appearance of this sophisticated creation of John Ostrander is almost always an indica of the serious depiction of female characters), and Batwoman. Batwoman is a lesbian here, as the character is in DC Comics’ mainstream continuity. But there is no adolescent titillation. The relationship is portrayed sympathetically and as entirely ordinary.

Batwoman’s nom de plume is more than an unexpected gag – she plays in the Women’s Baseball League and wields a baseball bat. In a sardonic twist, Batwoman appears to save a young boy from being orphaned by preventing the murder of his parents outside a movie theatre – and thus we assume Batman never came to be, in this particular reality. There is a feminist nod and wink here. In 1956, Batwoman was introduced into Batman’s cast of characters as a love interest in order to counter an allegation that Batman was gay as contained in Frederic Wertham’s book “Seduction of the Innocent”. The character therefore was little more than an indicia of the main character’s heterosexuality, and served a functional, sexual role under the Bat-symbol. Here, Batwoman’s origin has everything to do with baseball, and nothing to do with bats of the cave-dwelling variety, nor to do with Batman – indeed, as Batman was responsible for the creation of Batwoman, here Batwoman is responsible for the non-existence of Batman.

If DC Comics deliberately decided to choose an experienced female writer, a female artist, and the respectful treatment of the female characters in the book as a counter-balance to the sexuality of the associated figurines, then unexpectedly sophisticated marketing strategic thought has gone into this. DC Comics Bombshells #1 is an entertaining, lively, and surprisingly good adventure. There is plenty of shapely thigh and cleavage on the front cover. But don’t let that fool you into thinking the content is substandard.