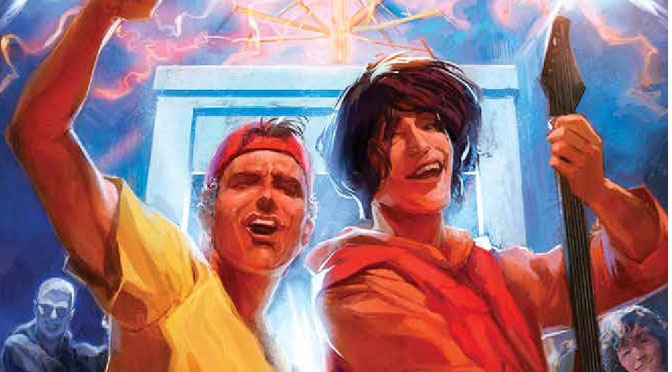 American film actor Keanu Reeves made his fame in two quirky films produced by US film company Interscope, entitled, respectively, “Bill and Ted’s Excellent Adventure” (1989) and “Bill and Ted’s Bogus Adventure” (1991). The two titular characters, using now very dated youth slang which would be incomprehensible to teenagers in 2016, formed a guitar rock band called “Wyld Stallyns”, the philosophy of which would very improbably become the foundation of a future utopia. In the two movies, the characters become romantically involved with two medieval princesses, are killed by evil robot versions of themselves, and travel backwards in time to meet, amongst others, Socrates, Napoleon Bonaparte, and Joan of Arc. This is accomplished with a combination of silliness and beguiling naivety. The movies were, at the time of initial distribution, simultaneously each an instant cult classic, as well as commercial successes. It is fair to say that the movies now generate nostalgia amongst those who grew up in the 1990s, and are impossibly incomprehensible to anyone born after that.

Mr Reeve was reported in interviews in 2010, during the promotion of his action film “John Wick”, as being very supportive of the production of a new Bill and Ted film. Mr Reeve has described the characters as “beautiful fools” (a common misquote from F. Scott Fiztgerald’s “The Great Gatsby”).

Mr Reeve would surely then be approving of this new limited series title, “Bill and Ted Go To Hell”. The writer, has admirably captured the essence of the original films. Bill and Ted are now fathers, married to the medieval princesses, but other than this extra level of responsibility and the distinction of being able to say that they graduated from high school, not much has changed for the two friends. Their pal, Death, is kidnapped by a motley crew of characters ranging from a garish and unpleasant version of the Easter Bunny to the commandant of the military school Bill and Ted were to be sent to: other old friends are gathered to help save the day. Socrates is not invited, given the peril, and he gives his opinion of his omission with a single gesture. Travelling to hell with their old friend Rufus in his Tardis-esque dimension-hopping phone booth which navigates using telephone numbers (“Hell is just one big unlisted number,” assures Rufus), the team discover that the Devil is chained up and the mastermind behind their recent problems is someone very well known to each of them. Our reviews are usually not concerned with spoiling the plots of the comics which we critique. But perhaps just this once we will help maintain the surprise.

It is worth observing how Mr Joines does so well. Perhaps most of the cause for the entertainment this title brings is because Mr Joines is faithful to the original source material. Bill and Ted have not upgraded their vocabulary and still sound like stoner teenagers from 1990. Mr Joines resisted giving the characters a contemporary refresh – would Bill and Ted have worked as hipsters? Only if the humour lurched mode towards the absent-minded self parody of “Zoolander”, perhaps. Mr Joines also avoided setting the story back in the 1990s, which perhaps would have framed the comic as a Brady Bunch movie-type parody: the laughs would have been at both the fashion and the emotional hinterland between post-Cold War sunny optimism and Kurt Cobain’s high school dystopian self-loathing.

Instead Mr Joines has the characters grown up but essentially unchanged. Their inherently naive optimism has not been eroded by the trials of a career of meeting mortgage replayments. If Bill had become an auditor and Ted had gone to work selling life insurance before confronting their latest predicament and returning to form, then the adventure would have been eroded of its inherent happiness. Mr Joines does an admirable job in scripting this comedy and capturing thr inherent joyfulness of the players. The risk that he runs, and the risk Mr Reeves and the producers of any new cinematic Bill and Ted adventure share, is that no one under the age of thirty-five will understand it.