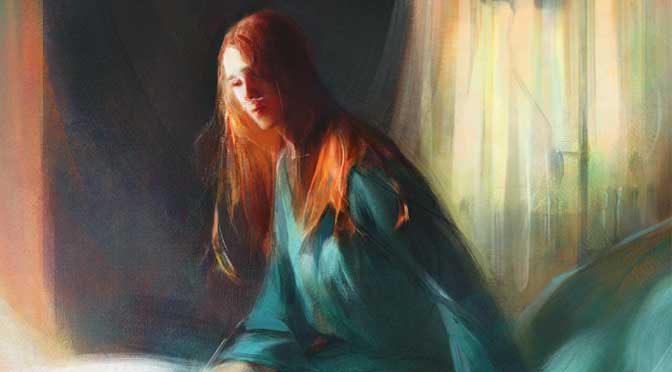 “Allies” is a new comic book series from Russian comic book publisher Bubble Comics. The new series focuses on the character Nika Chaikina, who used to be a master thief-cum-secret agent working under the code name Red Fury (the character featured in our article on Russians in Comic Books), tasked with finding the Holy Grail, an important relic from Arthurian legend.

The marketing descriptions for the title indicate that it is a team book, with Red Fury serving as the leader. But this is not readily apparent in the first issue. Instead, “Allies” follows Nika in the twilight of her career. The Holy Grail has been found and has been kept away from the wrong hands, but the introduction of the comic paints a grim end to Nika’s quest. The team’s celebrations were cut short as Nika and her fellow agents were ambushed by evil industrialist August Van der Holt and his army. The ensuing battle left Nika in an injured and comatose state, while the fate of her friends was eventually revealed in the comic to be no better.

The story starts with a somewhat gory hallucination in which Nika sees herself in a circus setting and being forced to walk a tightrope. The rope cuts her feet and she runs towards the end of the rope, blood trailing her foot while the circus ringmaster laughs. It is then revealed that the foot injury hallucination is relevant to what Nika is experiencing in real life – she is in shock after getting her feet injured (in what is presumably the ambush mentioned in the introduction text) and eventually amputated. This is followed by another round of hallucinations while she is sedated, showing various parts of her former life, with one thing common – her feet being injured and bloodied.

As the issue progresses, Nika listens to a voice in her head that encourages her to escape, promising help if she is ready. Nika soon discovers, for a fleeting moment, that the hospital room she is in is but an illusion, and that she is instead in a holding cell. The comic ends with a cliffhanger ending showing Nika’s teammates also detained in similar cells, and everything being watched through a monitor by the antagonist, August van der Holt. What is real and what is not?

“Allies” #1 is solidly written. There is a genuine mystery being built by the writer, Natalia Devova. Nika’s amputation might be a result of hallucination (the comic made an effort to draw a ghost like silhouette of her feet while struggling with the phantom pain that recent amputees are reported to feel in missing limbs.). If the comic lets down its audience, it is because there is too much fog. The comic will not be immediately accessible to most non-Russian readers’ lack of familiarity with the lead character and the failure of the first issue to explore this. We understand that some stories need to be built slowly and from a solid foundation, but this title is lacking the immediacy of a plot superstructure. Aside from the introduction text, the comic makes no attempt to introduce the reader to the Red Fury, or even the events that led to the comic. Perhaps the story is not suited to periodical publication, and instead it is best to wait until the entire story arc is complete before jumping in.