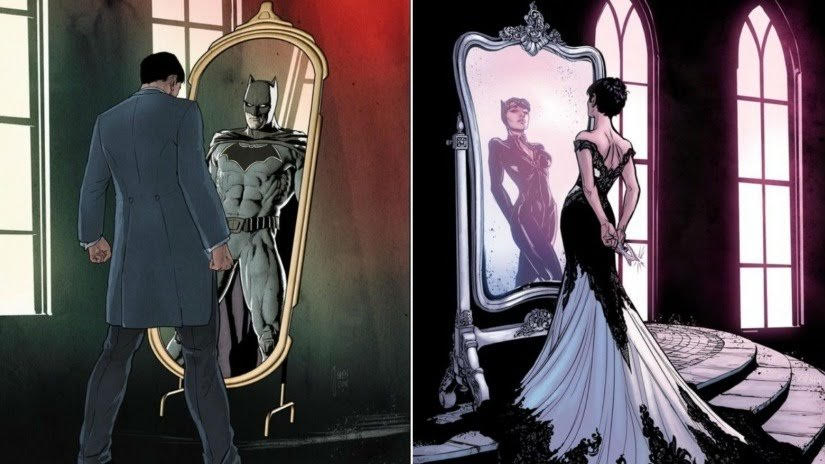 American superhero comics publisher DC Comics are exploring two significant events this year: the 1000th issue of Action Comics (a comic featuring the iconic superhero, Superman), and the wedding of the equally iconic masked crime fighter Batman to one of his former enemies, Catwoman.

Parallel universe versions of the characters were depicted as having done this in the 1970s. DC Comics for several decades parked its original, World War Two characters in a reality called Earth 2. A popular, crossbow-wielding detective called the Huntress was revealed to be the daughter of that Earth’s Batman and Catwoman. That relationship was the trigger for the two characters’ retirement from costumed life.

The scenario of the mainstream continuity versions of Batman and Catwoman retiring upon marriage is an impossible one: no rest will ever be visited upon either character while they remain inherently valuable intellectual property assets. They are each trapped like flies in amber, unable to change and with impermeable existences.

Setting aside the inevitable absence of marital bliss, one of the more controversial aspects of the wedding is that Batman is in love. Romance is often the setting for tragedy, but marriage generally is not. Batman as a character is defined by the tragic circumstances of his parents’ bloody murder in an alley: if Batman is so besotted by a woman so as to marry, is that immutable, core tragedy somehow diluted?

The task for the writers of this event is to ensure that Batman remains a tragic and haunted figure. A happy Batman might have been the characterisation in the goofy 1960s, but grim moodiness has been a staple of Batman’s demeanour since Frank Miller’s The Dark Knight Returns in 1986.

As for Catwoman, this is a career criminal who rose from the slums of Gotham City, the fictional home of the Batman cohort of characters. Sometimes depicted as a prostitute who turned to costumed crime, Catwoman is a deeply flawed individual – a recidivist thief.

In an interview with GQ Magazine, writer Tom King dismisses the idea of Batman being condemned to perpetuate unhappiness:

Q: Stepping back a bit, why are you doing a wedding story?

A: I was just looking for something new to do with Batman, and the thing that would really fuck him up is not making him sadder… but what would happen if we made him happy? He has that power to turn grief and pain and turn it into hope. That’s his whole power. He’s like a machine that works that way—so what happens when you reverse that, feed the machine what it puts out? Give him hope, give him happiness. Does the machine still function?… I think the reason Batman has survived in a way that most things from 1939 don’t survive, is that he asks this essential question: What do you do when you lose your parents? And that can be interpreted in multiple ways—literal dying, growing older, losing that connection to them. But that’s the question at the heart of that character. How do you deal with the loss of connection with the people who created you, the people who gave you life. I think when you’ve answered that question, you’ve finished your story… Bruce Wayne, what’s his ideal in life? When he closes his eyes and thinks of peace he thinks of his parents married and happy. Selina Kyle pictures some ideal lost Donna Reed family that she never had. They’ve lived their entire lives rebelling against that ideal, but that doesn’t mean it still doesn’t appeal to them. Sometimes the things you rebel against are the things you care the most about.

Mr King makes it plain: there will be no tragedy. The Dark Knight (as Batman is frequently called) shall have a Queen, proposing to her with the very first diamond that she stole.

And indeed, after the issue featuring the wedding (Batman #50) DC Comics is circulating a solicitation for a new Catwoman title. So, the creative plot trap, the cliche of Catwoman dying at the altar at the hands of a Batman villain in order to reinvigorate the character’s war on crime, will apparently be avoided. But, as Batman is a tragic story, we think that the likelihood of the two characters happily living out roles as a rebel couple is remote.

What are the scenarios if Batman and Catwoman cannot live comfortable existences without masks and violence? First, Batman is stood up at the altar by his wife to be. Batman has been jilted before. Detective Comics #476 depicts Batman dumped by a socialite named Silver St Cloud:

Detective Comics #576, exactly one hundred issues later, depicts the daughter of the murdering villain, the Reaper, choosing to become a nun in order to make up for her father’s misdeeds:

The scenarios open to DC Comics editorial team includes Catwoman tragically prevented from making it to the church, and Batman, heart hardened, immerses himself in his career, would make much sense. It perpetuates the tragedy, the mask of romance torn away by circumstance.

Theft can be an addiction. The other scenario is that Catwoman, a notorious burglar, decides before her wedding to go on one last spree, pitting her against her husband to be. The tragedy in that scenario is that Batman must choose between his never-ending war on crime and his fiancée.

Titus, when wert thou wont to walk alone

The introduction by Mr King of the Batman’s perennial foe, the Joker, makes us think of the play Titus Andronicus by William Shakespeare. Shakespeare told the story of the Roman emperor who married Tamora, the captured Queen of the Goths, in order to spite the Roman general who captured her. Catwoman has not been depicted (in more contemporary times) as an accomplice to the Joker: her brand of upmarket theft is very different from the Joker’s sadistic violence. Whether the Joker, in a perverse tragedy, feels betrayed by the marriage of a fellow villain to his arch-enemy is perhaps too much: the solicitations for the character’s appearance suggests an insane disappointment at not being invited to the wedding.

Perhaps the most genuine message which comes from this wedding is one of redemption. Both characters are capable of change and growth after all.