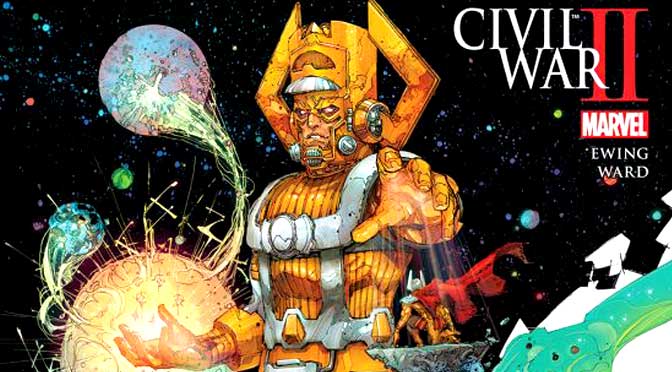 American publisher Marvel Comics is presently winding up an internal cross-title promotional event called “Civil War II” which, again, explores the concept of altruistic superheroes fighting each other. This time the trigger is the use of prophetic vision by a new character named Ulysses (not the Greek mythological hero) so as to prevent violence and murder. Others may be better at arithmetic than we are, but we calculate by reference to Wikipedia that in order to read every issue under the “Civil War II” banner, this would require the purchase of no less than 130 individual comic books. And so we leave a review of the entire “Civil War II” storyline to a comic book review website braver than us.

This particular issue is another cog in that remorseless sales machine. But one tactic that Marvel Comics repeatedly does, and can do especially well, is provide a primer for the new reader to the current storyline on the first page of every issue. Sometimes this is a hurried paragraph, sometimes more. In this issue, it is an extended monologue. It is extraordinary helpful to new readers, a map to navigate by, and we really commend Marvel Comics for adopting this to assist in accessibility.

The lead character in this title is Captain Marvel, a property which as a consequence of a creative revamp in 2012 from a swimsuit model with superpowers into a likeable Air Force colonel with superpowers has become somewhat iconic in very broad circles, but especially amongst female readers and feminists. In this issue, Captain Marvel laments the consequences of the confrontation between the heroes and a possible diplomatic rift with a fictional African nation, Wakanda, one of which is the White House’s decision to decommission Captain Marvel’s group of superheroes, called The Ultimates.

“The Ultimates” is a Marvel Comics title with a pedigree dating back to 2002 and writer Mark Millar’s work in milling down superhero altruism into something much more dark and lethal albeit in another dimension. But this book is not that book. This book is yet another superhero team book – one that features characters that expressly deal with cataclysmic cosmic threats. And it is respectable one, in terms of quality in a genre notorious for an absence of quality. But, unlike the original series of “The Ultimates”, it is nothing groundbreaking.

The quality in this particular issue manifests itself in a number of ways:

a. genuine tension between the king of Wakanda, a superhero named Black Panther, and Captain Marvel. The two characters by happenstance pass each in a corridor and can barely speak to each other;

b. humour. One of Captain Marvel’s colleagues, Ms America, a dimension-hopping superhero, takes Captain Marvel to an alternate Earth where they vent their frustrations by smashing up evil robots;

c. the remaking of itself. Superhero comic books do not disturb the status quo, as a rule. Once a title or a character hits upon a formula with commercial success, that formula can be followed for decades without significant deviation. This title on the other hand is in the process of significant transformation, whereby at least some of the characters will become the emissaries of an all-powerful being called Galactus. Created in 1966, Galactus is a creature resembling an enormous humanoid with god-like powers who must satisfy torturous hunger by devouring worlds (with, it must be said, hopeless form in his efforts at consuming the Earth). But Galactus has been remade in this series as a golden bringer of life and a “seeder of worlds”. The change in both Galactus and in the title more generally is extremely interesting and novel.

With all of that to digest, we look forward to the next issue, hopefully relieved of its “Civil War II ” crossover responsibilities and otherwise heading in respectable, and yes, even exciting creative directions.