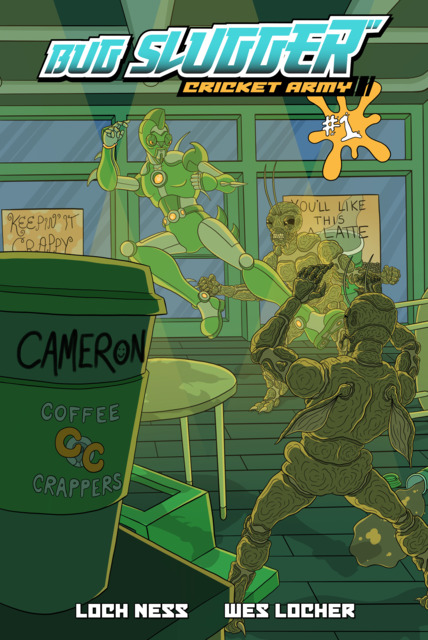 Comic books, like so many other forms of art and entertainment ranging from poetry to architecture, tend to reflect prevailing trends in contemporary politics and and society values. Some of this is abundantly obvious: the Milan train station built by Mussolini boasts Fascist grandeur, the Eiffel Tower celebrates the dawn of industrialisation. Some of it is less obvious: the almost complete absence of teen comedy movies in the 2010s reflects both the foregoing of motion pictures as a form of entertainment by teens in favour of Vine, Snapchat and now TikTok, as well as a cultural sobriety (National Lampoon’s Animal House could never be made today). So what can we expect of today’s serrated zeitgeist of geopolitical tensions and Coronavirus shutdowns?

A hero armed with a powerful and mysterious slap bracelet must defend his city against a siege of human-sized crickets led by an ill-tempered narwhal! But when The Kamereon comes across another bracelet-powered bug sluggin’ vigilante, he must decide if they are friend or foe while he still has a city left to call home.

Get your nostalgia on with enough references and homages to 90s pop culture, Japanese tokusatsu television, the Power Rangers, and other retro ephemera that you’ll have to wonder, “wow, just how old are the dudes who made this comic?”

It is very light-hearted content.Smashing through a glass window comes with the caption, “Window Pain!” and landing on a parked van below comes with the sound effect, “Vanned!” We confess we laughed. In the credits page there is a list of suggested voice talent for the characters (why has no one thought of that before?) and one, Hellen the narwhal superhero with pink nipples and chains over his chest, is to be spoken in the voice of Ron Perlman, an actor best known for playing the role of a racist biker leader in the television series Sons of Anarchy. This alone should elicit a snort of humour.

What to make of this? It certainly is not classic literature. It is not even a classic comic. But the creators, Loch Ness (either a pseudonym or a name which is the consequence of parents with an odd humour) Wes Locher and do not set out for it to be. The main character is a lizard-themed superhero who, as mentioned in the promotional copy, calls himself The Kamereon. After killing some giant cricket-men disguised as humans in a cafe, The Kamereon kills a hipster barista. There is an awkward moment, and The Kamereon leaves with some final pearls of wisdom: “Just, uh, stay away from crickets. Also, look both ways before crossing the street… oh, and don’t read internet comments.” Mr Ness and Mr Locher do not actually care what you (or indeed, as reviewers, what we) think of their goofy tale. They are having fun.Bug Slugger is instead a reprieve for those who find the daily slog of Twitter-led culture wars, lethal pandemics, mass unemployment, and trouble in everywhere from the Korean Peninsula to the Indian/Chinese border all too much. In that sense it is escapism par excellence.