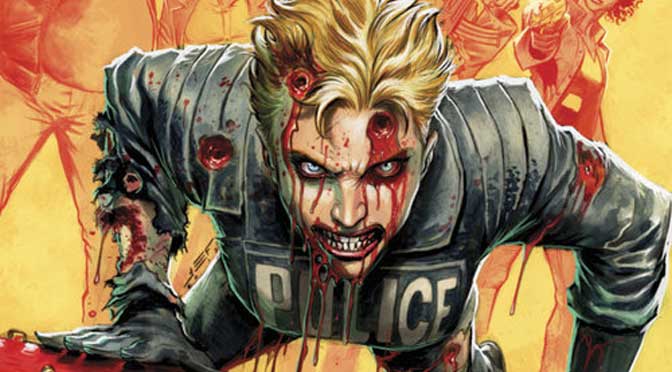 American independent comic book publisher Oni Press’ new comic book series Made Men is a well-stitched together sci-fi action yarn. It takes the underpinning concepts from Mary Shelley’s classic horror tale Frankenstein and incorporates it into a contemporary story about a female Detroit Special Ops police officer who, along with her team, has returned from the dead after being ambushed and viciously gunned down by a group of assassins.

Regular readers of our reviews would be aware that we frown upon what we call “Miller’s Curse”: the contemporary American comic book writers’ over-reliance on internal monologue as a method of propelling the narrative, which has its origins with Frank Miller’s The Dark Knight Returns. Overuse of this technique is lazy, and in a lot of cases unnecessary in a medium that does not rely exclusively on text for exposition. As in all things, quality makes the difference. Internal monologue and caption boxes, in the hands of the right writer and within the right story, can be employed effectively and will serve a unique purpose in the narrative. Made Men is one of these happy cases.

In Made Men, protagonist Jutte Shelley’s internal monologue is perfect for immersing the readers in her thoughts. This is especially within during the first few pages, where she tries to make sense of events while she and her team are violently torn apart by gunfire and explosions coming from all sides. The internal monologue in this case is very practical: it allows Jutte to introduce herself and many of the side characters, as well as the premise of the series, without it all seeming out of place. The character (or perhaps more accurately, the writer, Paul Tobin) is not spoon-feeding the plot to the reader. Instead, the flow of information is unforced, as Jutte recounts things to herself in an effort to make sense of the horrific events unfolding.

The ambush lasts only a few seconds but takes up a huge chunk of the first issue. This is in line with the perspective of Jutte, who is experiencing events in slow motion. Older readers will most likely recognize that the ambush references the 1987 sci-fi action film Robocop. Robocop features a Detroit police officer being ambushed and gunned down, only to come back as an unstoppable cyborg. The Robocop reference, along with the revelation that Jutte Shelley is related to Victor Frankenstein, sets up the comic’s main premise. Jutte Shelley dies, but comes back seemingly healthy and even jovial. Shestarts calling in old favors in order to hunt down the assassins. The final pages also shows what became of her friends, who are now turned into Frankensteinian monsters made up of stitched-together body parts (with one even incorporating body parts from animals.)

The first issue of Made Men is a well-designed springboard. It introduces the protagonists, the antagonists, and added a unique twist to the Frankenstein mythos while still leaving several mysteries for the reader to solve. It is not perfect by any means: for example, there is an odd  tonal shift after the ambush that could be jarring for some readers. Other purists may dislike the extremely heretical twist that the Frankenstein monster’s origins owes more to mysticism than Industrial Revolution technological progress. But none of the flaws are deal-breakers. There is a solid and somewhat unique story being told. If anything, the comic can be enjoyed as a straightforward action story about a fallen police officer’s revenge against her enemies. But it is more than that, and we expect Mr Tobin to unstitch this as the series progresses.