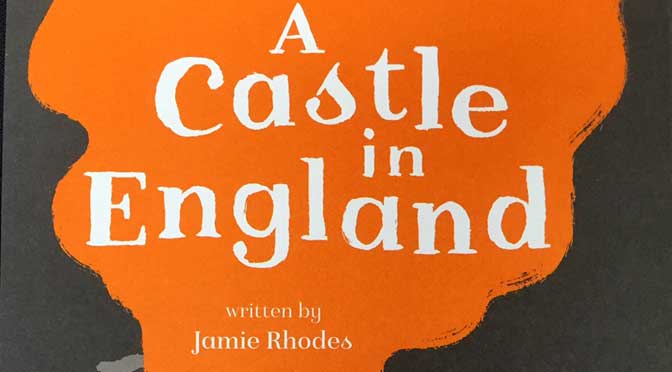 This comic is very curious. It is composed of five vignettes, each written by Jamie Rhodes in conjunction with five artists.

The five stories revolve around a location, an obscure place called Scotney Castle in Kent. The back cover copy to the comic book notes that the castle has born silent witness to the events in each of the vignettes. Europe is scattered with these remarkable stone monuments in the form of castles and churches, where everything around changes with time but the buildings themselves do not. This is a small one, but with startling stories hidden within its archives.

These five snapshots of history might not be accessible to the average reader with limited knowledge of English history. But each story is accompanied by a family tree explaining the relationships between the players. Even more helpful are two pages of text situated at the conclusion of each story, explaining in short, numbered paragraphs both the historical context for the specific story, and Scotney Castle’s role in that story.

Worst of these stories is “The Widow” in which an adult grandson returns to the ancestral home of Scotney Castle, where his grandfather killed himself and where his father died after a long illness. It is a dreary tale without much point. The only startling element of this story is the Edwardian concept of a “folly ruin”: where an ancient building, in this case Scotney Castle, is deliberately damaged so as to add ambience to a landscape. Another story, “The Smuggler”, is not so much dreary as muddled, save for the surprise that one of the protagonists’ coffins is filled with rocks.

Three of the balance of the stories are however very good. “The Labourer” neatly captures the Peasants Revolt in less than thirty pages. It is so succinct in its analysis of the causes and emotions of the characters that it could be read as a primer for schools.

The second story, “The Priest”, uses clever imagery to show the daughter of the castle’s Catholic owner, Thomas Darell, taken away by crimson devils to marry a Protestant poet. A Catholic priest, who takes refuge from agents of Queen Elizabeth within the castle, lies sleeping in a “priesthole”. The family including young children are in the meantime imprisoned, where Darrell dies. It is a dire and sad story.

“The Hunter”, in which a big game hunter is killed by a mosquito-born disease in a hospital in Singapore, is the final story. The appeal of this vignette is that the reader is not sure who is the hunter and who is the hunted: the mosquitoes are shown in full page panels, with the hint of personality.

The only thing missing from the story is a map of both the castle’s lay out, and of where the castle sits within England. It is otherwise an informative and engaging set of stories, together telling the tale of a monument which has lasted for almost nine hundred years.