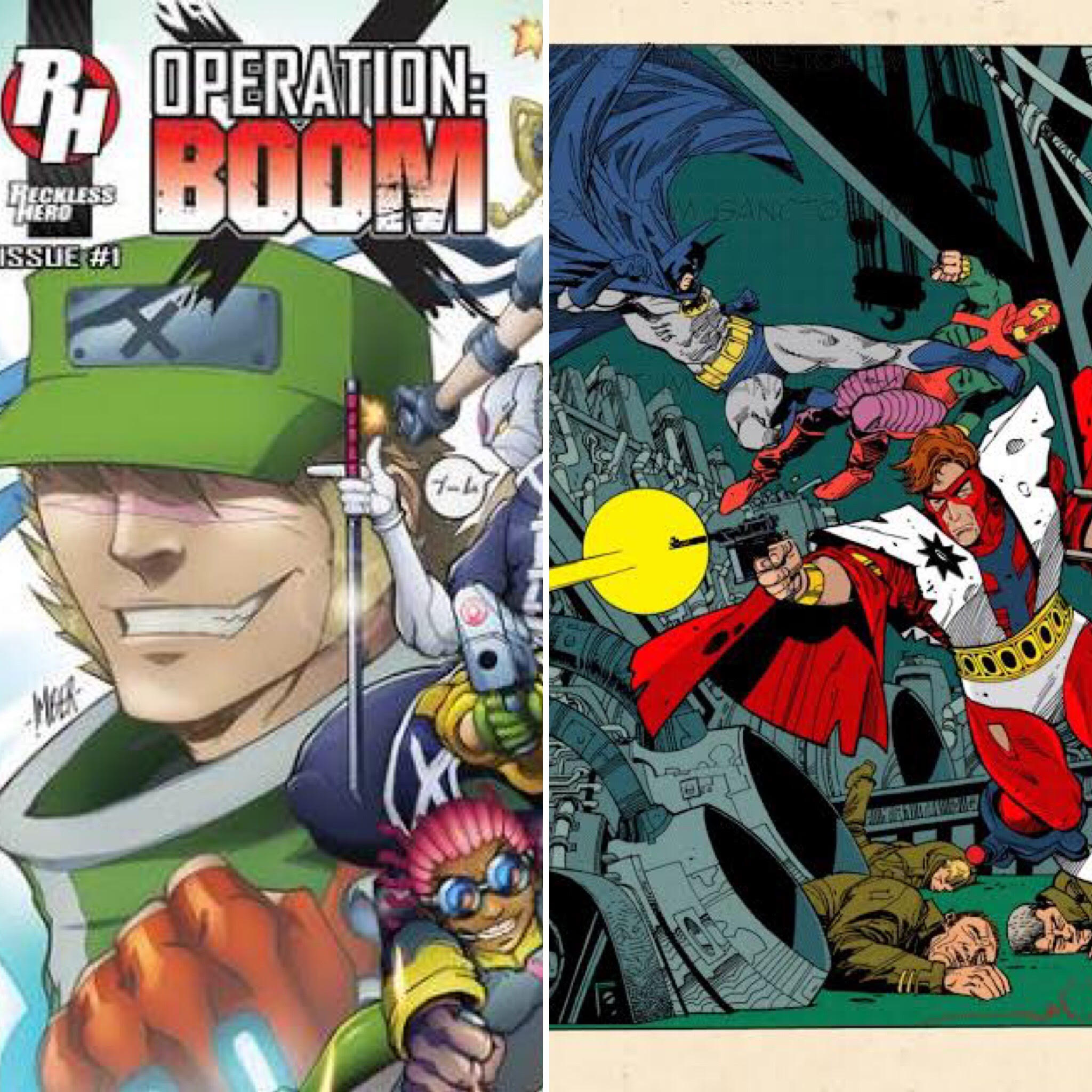 The superhero genre much suited to posturing, capes flapping in a wind, primary colours ablaze in a sunrise. In terms of action, the genre prefers either:

1. pitched chess piece melees, with platoons of costumed heroes and villains deployed across a battlefield in some sort of publisher-wide crossover promotional event, inflicting non-lethal harm upon each other, or

2. one-on-one fisticuffs, the usual standard for its action and ritualised violence, a duel replete with snarling repartee and concluding with the unconsciousness of one of the parties.

It was therefore rare prior to 1990 to see a superhero team sneak about to achieve an objective. Clinging to the shadows of Mordor like the Hobbits in JR Tolkien’s Lord of the Rings is usually much too low key for superhero comics. Setting aside the Manhunter story which is part of the subject of this critique, the only obvious exceptions to that rule were:

1. Chris Claremont’s Uncanny X-Men in the 1980s and 1990s, in which the team of mutant superheroes regularly had “capers”, used dirty tricks to win, and often suffered grievous injuries (although his was usually confined to Wolverine);
2. Justice League of America #183 – 185 (1980) in which DC Comics’ premier superhero team paired up with their alternate Earth counterparts the Justice Society of America and another group called the New Gods. These heroes crept about the Byzantine lair of arch-villain Darkseid. Perhaps this was less raid and more meander: the characters did not seem to have much in the way of defined quest objectives.

The concept of the superhero raid is worth examination. In this comparative review, we look at two comic titles, published forty-five years apart, both clearly involving a superhero raid. One is fun and light-hearted, except towards the end: the other is a deadly serious cult classic.

Operation: Boom! is written by Chris Imber and Chris Jenkins. It is a Kickstarter-funded, independently published title. The comic involves a team of paramilitary types, each with different skills. Together, they muscle into the lair of The Gentleman, an evil mastermind and the father of the lead female character, named Boom. The task is to recover a stolen USB (a particularly fancy one).

The team have particular tasks within the raid matching their skills. Boom likes explosives and fights in a tandem vanguard with the pistol-wielding leader, codenamed Cap. On point is Mr Udo, a Japanese ninja cyborg. Kidd is young paraplegic boy who commands a tank which can transform into an armoured suit, and serves as both heavy artillery and extraction to the team. And there is a sniper, Saryn, who picks off opponents from a distance.

Jaunty adventure is a hallmark of this comic:

1. The villains crackle and pop with villainy (particularly the somewhat feral assassin, Stick) and the heroes jump and swing about with uncanny athleticism and charismatic grins. The dialogue is hammy and buoyant, and the characterisation is stereotypically familiar (the tough but happy, white, male leader: the black boy genius: the sullen sniper) without being over the top;

2. The costumes are loud and entirely inappropriate for close-quarter combat, and seem vaguely manga in their style. Boom’s costume in particular is plain silly – but it is part of the fun;

4. the USB is protected by a death trap straight out of a Roger Moore James Bond motion picture – swinging axes over bear pits remind us of the cheesier elements of the original 1998 J. Scott Campbell’s Danger Girl mini-series.

Operation: Boom! is very much the bubblegum ice cream flavour of a Saturday morning pre-teen cartoon.

It is therefore with some shock that, during a climatic duel, Stick rams his bo staff through the masked head of Mr Udo (the attempt at murder was unsuccessful due to “the best of Japanese technology”),
and even greater shock when The Gentleman tears off the right arm of his daughter. These grisly acts of violence taint what is otherwise a happy-go-lucky and even goofy caper comic book.

Manhunter was unlike anything seen in superhero comics before: genetically modified to rapidly heal from wounds, the character carried a Mauser pistol (which we have listed in our summary of the eight most iconic guns in comics) shuriken, and a katar sword, and no qualms in killing. Manhunter fights evil clones of himself – he was to be their leader.

The storyline was an enormous success. As noted on the back cover of the 1984 collected edition, the Academy of Comic Book Arts awarded the series and its creators six awards, for a series of only seven (mostly very short) episodes. This included the 1974 Best Feature-Length Story of the Year Award, for “Gotterdammerung!”

Detective Comics has for decades been a home for the adventures of the world famous masked detective, Batman. Mr Goodwin notes in the introduction to the same collected work:

“From the beginning, mail to the comic had included quite a few pleas to have Manhunter meet The Batman… After using Chapter 6 to direct events towards a final showdown, we were set to bring down the curtain with a twenty-page team-up story, Gotterdammerung (if you can’t be pretentious in a last issue, when can you be?)”

Gotterdammerung! featured Manhunter joined by the supporting characters of the story, plus Batman, in a raid on the Australian outback subterranean headquarters of a sinister cabal called The Council. Manhunter, the Interpol agent Christine St Clair, Manhunter’s martial arts mentor Asano Nitobe, and weapons supplier Kolu Mbeya climb down into danger in an against-the-odds, conclusive strike against the Council. Mbeya ends up playing the role of sniper in the raid.

Batman, for his part, is not permitted by the raiders to participate: his methods are too mild for an attack which will necessarily involve lethal force. But Batman makes his own way to the Australian desert, shuts down a machine gun nest, and the crew permit him to join them.

The sight of the omni-capable Batman being sidelined in a fight because he is too soft is still a shock to many readers.

The team are successful in their efforts, but Manhunter does not make it out – again, another real surprise for readers of superhero comics, to witness a protagonist dying in combat.

To DC Comics’ credit, the character has never returned from the dead (death in superhero comics is usually a transient thing), although various Manhunter clones have appeared over the years in different titles.

In terms of creativity, with apologies to Messrs. Imber and Jenkins, Mr Godwin’s work is the clear winner. (Although if we were inclined to pit one team against the other in a fight, Cap and his capable team would come out on top against even the combination Batman and Manhunter.)

But despite both stories being about superhero-led raids, this is a comparison of apples and oranges. Gotterdammerung! is a remarkable story, filled with frenetic, dense action and prose, which even the late Mr Goodwin thought was one of the pinnacles of his long career. On the other hand, Operation: Boom! is a boisterous and diverting title which does a fine job of not quite taking itself too seriously, eminently worthy of cartoon adaption.

Operation: Boom! is available on Comixology.