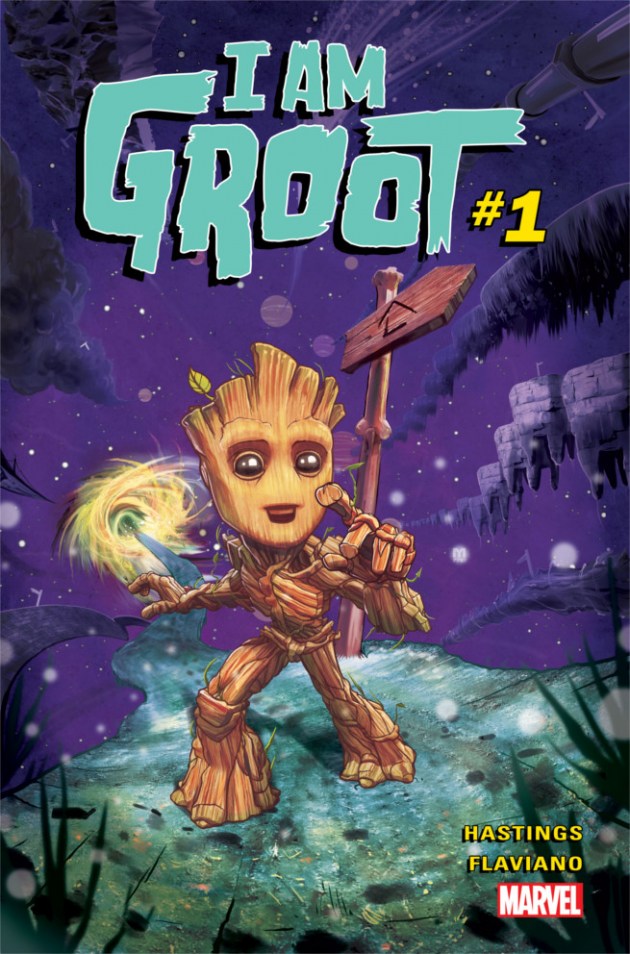 I am Groot #1
Marvel Comics, May 2017
Writer: Christopher Hastings

“I am Groot” is a new comic book mini-series from US publisher Marvel Comics that serves as a tie-in to the recent “Guardians of the Galaxy Vol. 2” motion picture from Marvel studios. Similar to the “Rocket Raccoon” comic book (which we have reviewed before.), “I am Groot” leverages the audience familiarity built around one of the movie’s more likeable characters. This time around, the tie-in comic book focuses on the hulking, monosyllabic, and sentient tree-like creature named “Groot.” The creature was destroyed in the first movie, but demonstrated the ability to regrow out of a single splinter. This comic reveals that Groot has been growing much slower than usual and is currently stuck at the size of a sapling.

“I am Groot” #1’s story starts with Groot playing around in the cockpit of The Guardians of the Galaxy’s trade mark ship, “The Milano”. Groot accidentally strays close to a strange portal that the team mistakes for a black hole, despite not behaving like one (the anomaly is not pulling the ship towards its center.)

Groot, in his current state as a sapling with the characteristics of a playful toddler, decides to steer the Milano straight into the portal, which starts to close as soon as the craft approaches. The crew pragmatically decides against going further and successfully manage to get out of the portal as it starts to close. Unfortunately, Groot continued playing with controls and got himself trapped in an escape pod, which is subsequently and inevitably launched straight into the closing portal.

The rest of the comic sets up the next issue, a solo Groot adventure in an unknown place called “the Terminal”. Groot is accompanied by a mysterious alien which looks like a purple dog and they are both pursued by a mass of shapeshifting techno-organic creatures. These creatures seem to have taken on horribly malformed versions of the Guardians of the Galaxy as a reaction to Groot.

Writer Christopher Hastings faces the difficult challenge of crafting a working story centered around a character that can only communicate using the phrase “I am Groot,” and which is usually limited as a repetitive, single phrase-uttering comedic foil to the loud-mouthed character Rocket Raccoon.

There is no doubt that Groot has gained a massive following as a result of the second “Guardians of the Galaxy” film, and so is currently one of the more lucrative Marvel properties. But this incarnation of Groot provides very little substance in terms of characterisation and cannot easily carry his own story. In many ways this story is similar to American publisher DC Comics’ “Superbaby” stories starting from 1949: it is a pointless and silly iteration of a commercially successful concept.

The decision to center around the sapling incarnation, which so far is carried only by the cute character design, seems fatally limiting. This is made worse by the decision to separate Groot from his team members, all of whom provide the necessary context to Groot’s one-phrase dialogue.

“I am Groot” #1 is not designed for longevity. There are fans of Groot who need to own every single merchandise carrying the character’s name. This title will appeal to that niche demographic.