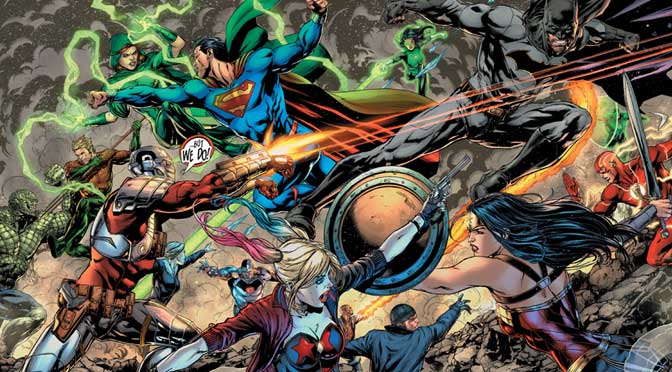 “Justice League vs. Suicide Squad” #1 is American publisher DC Comics’ blatant attempt to ride the momentum built by the 2016 “Suicide Squad” motion picture (which did not garner critical acclaim, but was commercially successful) and the hype currently being built around the upcoming “Justice League” motion picture. Both motion pictures were released by film studio Warner Brothers. Warner Brothers is the parent company of DC Comics. The marketing strategies of the two businesses are therefore broadly aligned.

The story involves the Suicide Squad, which is comprised of supervillains that are coerced into deadly missions. This is achieved through the use of implanted chips that contain explosives by the high ranking government official, Amanda Waller. The Suicide Squad offer plausible deniability to the government in the event of failure or capture. Each time the team succeeds, the jail sentences of the individual members is commuted. Waller pitches to her superiors this Machiavellian arrangement as a way of rehabilitation, of the super criminals earning their freedom.

The events in the comic put the Suicide Squad in the fictional island called Badhnisia, tasked with recovering a “quake pulsar” from a death cult that plans to use it to cause an earthquake. The mission runs smoothly (by the Suicide Squad’s sub-basement standards, at least, because these are supervillains who do not care about collateral damage or civilian casualties). But the resulting chaos attracts the attention of the Justice League. The Justice League is a collection of DC Comics’ main superhero properties, and are each altruistic to the core. The Justice League do not approve of the Suicide Squad’s methods, and in general do not believe that Waller’s idea of rehabilitation is sound nor sincere.

The Justice League steps in at a crucial moment, saving one of Suicide Squad’s members. But the Justice League make it clear that they are there not to aid, but instead to recapture the villains. This, as the villainous Harley Quinn points out to the Justice League, does not make sense given the super criminals are already in custody (“Whatcha gonna do? Lock us up?”).

But this is a superhero crossover event comic book – a promotional exercise designed to increase sales both through the event itself and on an ongoing basis through crosspollination of readers. And so the writer, Joshua Williamson, pits two franchises against each other and the double page spread featuring members of the Justice League and the Suicide Squad rushing each other is obligatory but inevitable.

Peripheral to this pugilistic action is the villain Maxwell Lord. Maxwell Lord has a long history with DC Comics’ various continuities, that includes being responsible for formation of an incarnation of Justice League. Lord’s characterisation has shifted slowly from being a fast-talking but very successful businessman, to an antihero, to an antagonist, and to being a supervillain. (At one time, the character was depicted as being murdered by Wonder Woman.) Lord has freed several powerful supervillains from incarceration (at least one of these villains, the spacefaring bounty hunter Lobo, is powerful enough to pose a threat to the entire Justice League on his own) with the intent of having them kill Amanda Waller. In dialogue, Lord thinly observes that it is part of his plan to save the world. In reality, Lord’s team of characters is a threat to compel the Justice League and the Suicide Squad to join forces and then battle together in issues to come. The halogen-lit elements of the plot are hard to miss.

The 1988 story depicted the Suicide Squad on an unauthorised rescue mission, to save one of their own from execution as a spy by the USSR government. The Justice League International, as a UN peacekeeping authority, intervenes. There is an element of sophistication (characteristic of Mr Ostrander’s writing). Superhero comic books in the late 1980s noticeably matured.

But this new, 2016 issue is exactly what contemporary comic book readers would expect from the first issue of a crossover comic book: the flimsiest of plots designed to set up a conflict between the two participating franchises. It is like watching a toddler play chess.