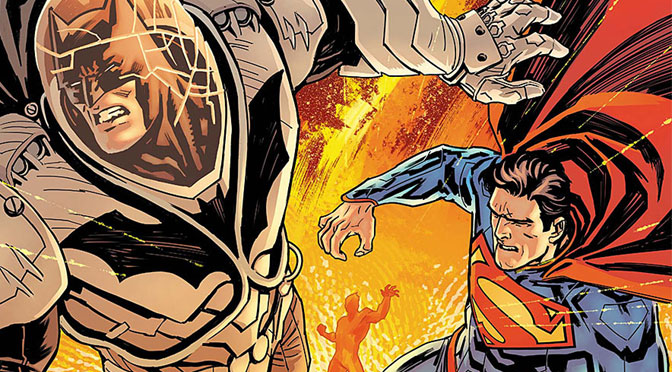 In this comic, two iconic superhero properties, Superman and Batman, team up to fight an enormous sentient lizard residing in space and with a penchant for eating his own live children, who has somehow trapped a dying alien with the same superpowers as Superman.

The alien has in turn chained Superman with the assistance of kryptonite, a substance which is toxic to Superman. For reasons not apparent the alien decides in this issue to help Superman escape.

Batman in the meantime has stolen a spaceship, and hotwired the communications device of an intergalactic policeman in order to call in help, apparently after somehow removing half the face of a vengeful space mercenary named Lobo.

Batman then dramatically advises Superman that the only way forward is that he, Batman, must die. Lobo exacts his revenge by thrusting Batman into the void of space. But it turns out that this is not Batman – this is Superman dressed as Batman.The twist of Superman wearing Batman’s costume has a pedigree dating back to “World’s Finest Comics” 74, published in 1954, and we assume that the writer, Tom Taylor, is giving a wink to those in the know. But for the purpose of the story, Batman has somehow procured a spare costume.

The giant sentient lizard is then arrested by the intergalactic policeman and his colleagues.

Batman also reveals at the end of the story that he has learned the language of Superman’s home planet, Krypton. Perhaps Superman is Batman’s tutor.

At the end, the alien, who has been staring at a star for generations, sits on a grassy hill on Earth, sees a final sunset, and suddenly keels over and dies, flanked by an unmoving Superman and Batman.

This issue is part four of the story. We did not buy parts one to three inclusive.

This conclusion to the story lacks three key things:

a. an explanation of what happened in the previous three issues. The was no indicia on the cover of this issue 30 that the purchaser also needed to snap up three prior issues. The new reader is entirely baffled by the story contained in this issue;

b. a desire to treat the audience as grown-ups. This story is called “Universe’s Finest”, and in that regard gives a nod to the long running title “World’s Finest Comics” (DC Comics, 1941-1986) where Superman and Batman teamed up to fight the likes of beautiful were-unicorns, and had sons in the context of imaginary stories. “World’s Finest” stories were silly tales from a less sophisticated age when comics were read by young boys and girls. Giant space lizards might be the fare of pre-teens… in which case why was Lobo’s face depicted as a ruined and bloody mess, and why did the giant space lizard impale his hand, with abundant gore, upon Superman’s invulnerable head?

c. coherent storytelling. There should be no expectations in a title like Batman/Superman other than to enjoy a mildly entertaining moment of escapism with a recognisable plot. This story failed in that. The attempt at poignancy upon the superpowered alien’s death is appalling. Batman is depicted as slightly hysterical. The captured alien is angry in one moment, compassionate in the next.

Sadly, this title will sell no matter what the content because of the newly released Superman v Batman movie. With an eye on easy sales, and no focus upon drawing in new readers who may have their curiosity prodded by the movie, both Mr Taylor and the publisher DC Comics do the medium of comic books no favours.