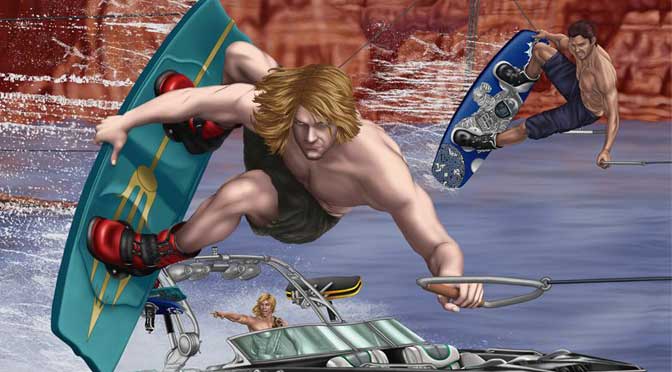 “Dude, I know you need college money but you gotta unwind. No goals. I’ve got it under control. Always do. I need to hear you say that.”

“Shake the Lake” #1 is an enigma. On the face of it this is a coming of age story based in Lake Shasta in California, whereby a group of male friends in their late teens spend all of their spare time wake boarding and partying. The crew bounce on trampolines indoors with wakeboards strapped to their feet and thereby break the ceiling fan in their rental house. They drink to excess and make monumental beer can pyramids. “There’s a naked man in a tubie and a spray painted goat in the front yard!” yells Akbar the landlord as he evicts his youthful tenants. It is the essence of the college frat house motion picture “National Lampoon’s Animal House”, but set in 2016 instead of 1962.

The teens have no aspirations in life save for Joe, who is a server in a fast food outlet and cleans up vomit in the toilets while trying to make manager. His goal is to get together enough money to get a degree. The main protagonist, Cal, has a girlfriend, Keeley. When Cal discovers his Keeley’s gym buddy Guy sucking vodka jellies from Keeley’s navel, Cal is blindsided. The team decide to get out of town.

This involves a road trip to Arizona to stay with a relative and his once-nerdy, now-underdressed-and-attractive cousin Nika. Nika is aware of her sexuality and doesn’t seem bothered by the low-key fluster that it causes her cousin.

The story seems to be almost autobiographical. It also seems to be without a discernible plot. The gang of friends drift about with the only navigational point being Cal’s mother’s enlightened encouragement that Cal should go find himself. The issue is primarily concerned with parties, looking at girls in bikinis, wakeboarding and being without purpose.

Perhaps the writer, Zach Block, did not intend for the issue to have any deeper point than that. But simmering beneath the lake, as the boys carve up the water, are the tensions of the transition to adulthood. When does youth end? In many ways this first issue seems to be the closing chapter of the group’s carefree days, the last hurrah before they go back to mopping bathroom floors or working with their dads in weeding businesses. Cal loses his girlfriend in a thoroughly brutal way. Is this a harbinger for the harshness that life will bring to the friends going forward? In “Howard Chaykin’s Amerikan Flagg!”, published by First Comics in 1988-9, the title character Reuben Flagg’s adventures and numerous sexual exploits end with his marriage – and there is at the very end a one page, wordless drawing of Flagg in a vision from his future, turned overweight and scrubbing filth from dishes in a foamy sink, being screamed at by his now-frumpy wife while his out-of-control children cause havoc around him. Should we instead of scorning the excesses and silly exploits of the characters in “Shake the Lake” wish them the best in the final sunny days before arrival of the dour and sensible clouds of adulthood? Is that the point of the story? We are still scratching our heads and trying to divine where this title is going.

There are some funny moments in the story. Cal’s mother fondly asks after Keeley, and when Cal says that Keeley has dumped him, Cal’s mother flippantly notes that she never liked Keeley anyway. The expression on Cal’s face is priceless, and the scenario is one to which many can relate.

But the intrigue of this issue is whether Mr Block is pointlessly engaging in the equivalent of a mindless video recording of a teen summer, or whether there is something much deeper at play here which is barely perceptible beneath the sunny surface. If it is the latter, then Mr Block has a deft touch, and a future as a talented writer.