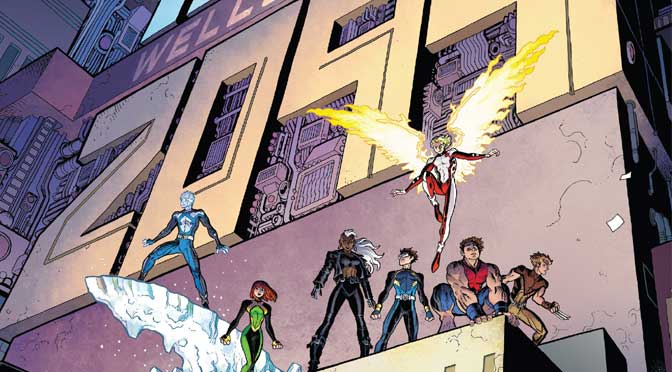 US comic book publisher Marvel Comics’ X-Men franchise is no stranger to time travel-related story arcs. Some of its most popular runs (such as Chris Claremont’s 1981 storyline entitled Days of Future Past) and most popular characters are heavily reliant on time travel as a plot device. The comic book series titled X-Men: Blue is no different. The main characters in this series are teenaged versions of the X-Men’s original lineup from 1962. These characters (depicted as being from, say, ten or fifteen years ago rather than around fifty years ago) were taken from their own timeline and stranded in the present (2017) where they currently co-exist with the mainstream and adult versions of themselves.

X-Men: Blue #17 takes this one step further. Readers are dropped in the middle of a storyline where the young X-Men have accidentally time-traveled to the year 2099, as a result of a malfunction of the time machine they are using.

The World Comic Book Review has always included accessibility as a factor in our reviews. X-Men: Blue #17 rates at the narrow end of the spectrum of accessibility. Any reader interested in the comic must have a fairly deep understanding of the X-Men franchise. New readers will be completely lost.

The year 2099 is the setting for a group of titles that fall under Marvel Comics’ Marvel 2099 imprint. This concept started in 1992 and featured alternate, far-future versions of the publisher’s characters. The 2099 universe originally functioned separately from Marvel’s main continuity. But it has since been merged into, and purports to represent, the mainstream continuity.

Quite unsurprisingly, the young X-Men’s foray into the year 2099 led them straight into a run-in with a group called the X-Men 2099. This is not some future version of the 2017 X-Men, but rather a new generation of mutants who have taken on the name. After the introductions and verification of identity (which came easy as the X-Men 2099 includes within their ranks an anthropomorphic supercomputer), the X-Men learn that in the future many lower class humans and mutants are segregated and policed by the Alchemax corporation.

This is where the main mystery is introduced, and where things get very muddy indeed. Readers who are familiar with the 2099 imprint will recognize the name of the Alchemax corporation. It is a prominent fixture of many of the stories and serves the role of a de facto corrupt corporation with influence, power, and military might that would rival a government. The big surprise is revealed that Alchemax has been conducting its activities using the name and images of the original 1962 X-Men. According to the X-Men 2099, the reason is that the original X-Men have taken over the Alchemax corporation sometime in the past. While the motives of the original X-Men were altruistic at first, the group eventually turned into an oppressive cabal.

Then we get the obligatory superhero fight scene. The young and future X-Men team up against a giant robot spider in order to evade capture, and otherwise protect innocent bystanders. The genre-trademark brawl is peppered with humorous quips (which could be characterised as cheesy, but is perfectly in-character for the teenaged, 1962 X-Men). There is a bit of banter that implies an impending love triangle between BloodStorm (a future, vampire version of X-Men mainstay character, Storm), the telepathic and telekinetic Jean Grey, and X-men leader Cyclops that feels forced. But it is not without precedent. Cyclops in all of his versions has been characterized as fond of chasing women – although in this instance, BloodStorm has red eyes rather than red hair.

After the fight is done (with the X-Men coming out on top, of course), the story starts to subtly recount some of the mysteries being built. What led to the original X-Men to become despotic? Does the young X-Men’s ongoing and irreversible time displacement have anything to do with it? It is also a question as to whether their sidetrip to the year 2099 was intentional on the part of the time machine’s owner, a sometime nemesis named Magneto. And to further add to the complications, the final pages show that their next destination leads them straight into a yet another unintended timeline, this time straight into a confrontation with yet another young mutant team, Generation X.

Despite the chaos of unwieldy, muddled-up time streams, we recommend X-Men: Blue #17. It is very far from being an ideal starting point. But it does a good job of filling in details and explaining references organically within the dialogue. We doubt that jaunts throughout time and space can sustain this title indefinitely, but at the moment writer Cullen Bunn is doing a great job working time travel into his stories.