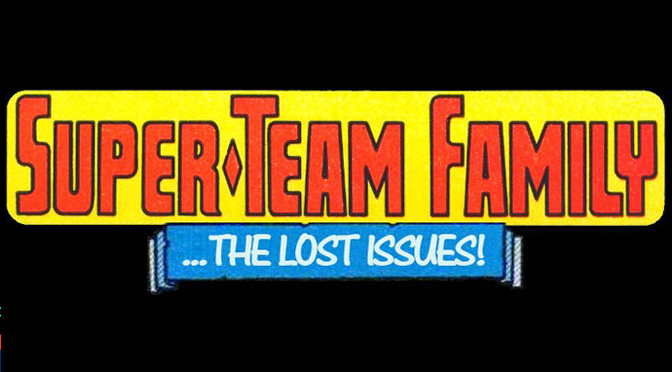 “A dream! A hoax! An imaginary story!”
The amazing team-up blog of Ross Pearsall.
Review by DG Stewart, 14 January 2015

Blogger and creative talent Ross Pearsall has been the subject of many online discussions relating to his remarkably creative and fun work in producing fictional comic book covers on the site Super-Team Family: …the Lost Issues! .

WCBR: How long have you been doing these covers? What inspired you to do this?

Ross Pearsall: The covers began with me imagining what The Brave and the Bold would have been like if it had continued. I used MS Paint to mash up existing artwork into new imaginary covers. I tried to team Batman up only with DC characters that were published around the time the original B&B series ran, using Jim Aparo artwork whenever possible, to make the covers that I thought might have actually appeared. Upon exhausting that concept, I started to branch out, using heroes from Marvel and elsewhere. This eventually led to me switching titles, using Marvel Two-In-One, with The Thing as the anchor hero hosting rotating guest stars. People seemed to get a kick out of these when I posted them on a message board and when it was suggested I start a blog, I did so in April of 2010. After a while I decided to step things up by switching to Photoshop for creating the covers and switching the core title once again to Super Team Family, which could encompass any type of team up I could come up with. The concept I started with was – “What is Super-Team Family ran forever, with access to any character from anywhere?” That’s broad enough to allow me to feature all the characters and creators that I admire. I switched from MS Paint to Photoshop after over 500 B&B and MTIO covers and 320 or so STF covers. It was a learning curve, but eventually it opened a whole new world of possibilities for me. That said, I am proud of what I was able to accomplish with a relatively simple program like MS Paint while I was using it.

WCBR: The mash-ups you do have a distinctly nostalgic theme to them. You utilise Silver Age comics techniques such as word balloons and dialogue in your covers, dynamic interaction between characters, and plot summations – some of them have a Neal Adams style to them which is very evocative of the 1980s. Plus you use the old DC Comics logo. It is a long way from the covers of today with their character arrays and silent non-thematic profiles. Why do you think the art changed?

Ross Pearsall: I’m not sure why comics moved to a more pinup/movie poster type covers, I always assumed that it was to make comics look more “adult” and compete with magazines on the racks. I Don’t have a huge problem with covers of today, there ‘s still plenty of great stuff being put out. For the blog, I only have a single image to use, so the tools of the speech/thought bubble and caption boxes/descriptive titles come in very handy for depicting what a scene is about.

Ross Pearsall: Oh yes, I loved them and they are a huge inspiration to the blog. Batman/Hulk is my favourite due to the beautiful Jose Luis Garcia Lopez artwork. I thought Marvel Vs. DC Missed the mark though, as so many of the iconic characters were going through “extreme” 90’s changes at that point – they should have stuck with the classic versions.

WCBR: What do you think the attraction of your covers is – the evocation of nostalgia?

Ross Pearsall: That’s probably a good way to put it. I think it’s mostly about the characters and artists that I feature. They have inspired a lot of fans out there, and it’s fun to see their creations in new ways. Plus, as kid we all wondered about what would happen if this guy met that guy, so it’s fun to see some of those ideas come to life, even if it is only for a single cover.

WCBR: Many of your covers have linking themes: the Indiana Jones and the Red Skull cover is from World War 2; the Luke Skywalker and Aliens cover evokes science fiction classic; the Green Lantern and Spider-Man cover is a nod to the “webslinger” and “ringslinger” nicknames of each respective character. Is there always a theme?

Ross Pearsall: I’d like give some sort of an idea of what each cover would be about, so I usually begin by looking at the characters I want to featured and thinking about what they may have in common. which can present story possibilities. Sometimes it’s fun to pair characters that have very little in common as well, just for the interesting contrast. Other times I find images that just go together well, and I go backwards and figure out a story idea to fit around it. Then there’s times I build a cover simply based on a corny gag or bad pun that i want to do. So, no regular theme other than I hope that the finished product will be seen as interesting, cool for funny.

Ross Pearsall: I try to stay a few months ahead in case I am too busy or get creator’s block, but basically I try to work on the blog for a couple of hours early in the morning and a few more late at night. It’s not easy, but I am glad that I have been able to keep up the pace thus far.

WCBR: Do you suffer from the temptation to complete the story suggested in the cover? One of the covers, for Green Lantern v Galactus, suggests that Galactus consumed Oa – surely a gripping tale which needs to be told?

Ross Pearsall: Yes, certain covers lend themselves to sequels and I have often done follow-up stories. There are a lot of two-part tales as well. I have some recurring relationships that return such as the Marriage of Wonder Woman and Captain America, the relationship between Power man and Power Girl, Supergirl and Ms. Marvel being twins, and Hawkeye and Huntress being siblings, etc. Also my “teams”, in which I present a whole new team of characters rather than just a team-up, will make return appearances from time to time. When I do make a new cover that builds off of events from an earlier one, I try to make sure and include a link to the previous cover.

WCBR: Any regrets about any of the covers?

Ross Pearsall: Many of the MS Paint covers and even some early Photoshop covers are pretty rough, as I was learning as I went along. Indeed many of these covers were created before I even thought about having a blog, never meant to be seen by more than a few people. I considered only including the “good” ones, but later decided to post them warts and all, and let folks see the progression of my ability from those early days.

WCBR: What is your favourite cover? Why? Which has been the most popular cover and why?

Ross Pearsall: I really liked my Daredevil/Calvin & Hobbes cover where they are dancing together. The most views by far was an early JLA/Spider-Man cover, which I think was linked to by some video game blog. The Thing/Death MTIO cover was tweeted out by Neil Gaiman and that also received a lot of traffic.

(With many thanks to Ross for his time for the interview.)