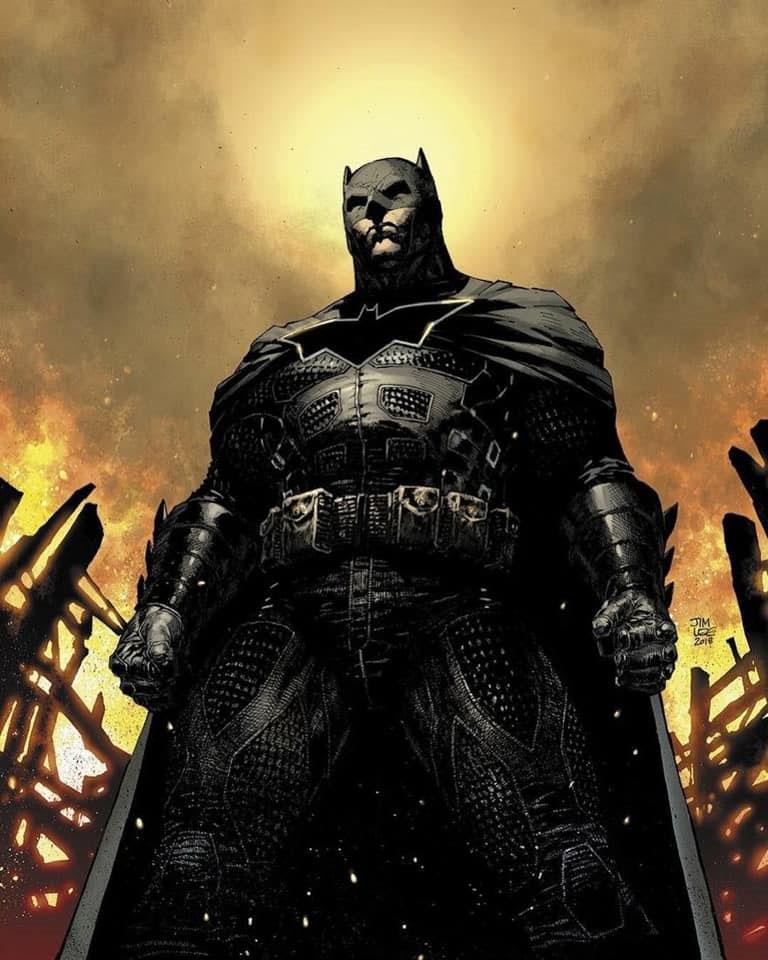 Our interpretation of this comic may be not what writer Brian Azzarello intended, but this is how we have read it.

Let’s start by considering the title character from a high altitude. American publisher DC Comics owns a character called Batman. Batman is an embodiment of irrational wrath. Many Batman fans angrily object to that assessment. They prefer rational infallibility. But on the evidence set out below, the character is borderline psychotic. Which leads in turn to the question: how does that fit into this plot?

Batman is a masked crime fighter, horribly orphaned as a child and heir to billions of dollars, who decided to avenge his dead parents with a never-ending war in crime.  Batman’s wealth is apparently stupendous.

Rather than invest those billions into conventional crime prevention like firearms education or rehabilitation strategies for released offenders, Batman dons a fetishistic costume by which he looks like a sinister bat. He has himself instructed in martial arts to an almost paralleled degree of proficiency, and spends hundreds of millions on hi-tech paramilitary equipment and a subterranean operations centre.

Batman then goes out and hunts criminals in a nightly spree of sadomasochistic violence. Batman punches and kicks criminals into unconsciousness and suffers grievous damage himself in doing so. The only parameters on his activities are to save the innocent, kill no one, and express his hatred of firearms.

Batman has a remarkable intellect, and is described as one of the world’s greatest detectives. Yet he either has not deduced or wishes not to deduce that he is mentally ill. This was the message in Frank Miller’s much-maligned All-Star Batman and Robin (2005-2008) –  Batman is undergoing an extended psychotic episode, one of unmitigated and unending fury. And in  the comic JLA / JSA: Virtue and Vice, written in 2002 by David S. Goyer, Geoff Johns, and Carlos Pacheco, Batman becomes the nature avatar of one of the Seven Deadly Sins, Wrath.

As Batman says on the third page of this issue, “being psychoanalysed” is something he himself does not welcome. “What I feel… is none of your business.” But Mr Azzarello dares to do so. In the backdrop of the action is a sad story from Batman’s youth, before his parents died. It seems the venerable Thomas and Martha Wayne were in the opening stages of an affair and a bitter divorce. Batman’s young alter ego, Bruce Wayne, like so many children, is helpless chaff in the storm of such matrimonial disputes. Mr Azzarello adds to the Batman mythos when he portrays young Bruce using a cap gun to shoot his mother in the head. No doubt this sets the stage for guilt and responsibility when Martha Wayne is eventually shot dead in an alley.

Mr Azzarello takes this concept of wrath and looks at it through the medieval eyes of Dante Alighieri. Batman: Damned appears to be a very rough copy of the plot from the first and most famous book of Dante’s Divine Comedy. This epic poem was finished in 1320. It is broken into three chapters: Inferno, Purgatory, and Paradise. Inferno describes the author’s passage through Hell, guided by the shade of the Roman poet Virgil. (Being guided through hell is nothing new for DC Comics: the break-out title for Scottish writer Grant Morrison was the excellent Kid Eternity (1991) in which the title character guided a dead comedian through the horrors of hell. And indeed there are parallels between the hell of Kid Eternity and the Gotham City of Batman: Damned.)

In Batman: Damned, the role of Virgil is taken by John Constantine. Constantine is a curious artefact of DC Comics’ continuity (we have previously identified him as a “clever man”). Placing Constantine and Batman into the same narrative was always going to be tricky for Mr Azzarello. Given both characters are successful in their adventures because of their trademark knowledge, survival skills, and quick wits, in this caper, who is going to outwit who? But Constantine knows magic and Batman does not.

And so it evolves, that it is Constantine who is the guide to Batman along the trails and through the gates, ever downwards. The gates of hell are suggested by the tunnel at the conclusion of issue 1.

In the mist is the face of a man, and he is hooded by the shape of the tunnel. The green slime around the rim of the tunnel suggests that this he the Spectre. The Spectre is a green-hooded supernatural spirit of vengeance, a creature with much affinity to Batman. The Spectre judges humanity. Batman has dark recesses to his soul, a point made by Mr Azzarello in an accompanying narrative: “Sad man. Mad man. Bad… No. Stay with mad. Let the anger smoulder an’ catch, burn away unnecessary thought.” How would Batman be judged?

In Inferno, Virgil and Dante traverse the various circles of hell and encounter monsters along the way. In this second issue of Batman: Damned we see demons in abundance.

First, the Enchantress appears out of nowhere. This is a character which played a starring role in the Suicide Squad motion picture (2016) but which has a long history in comic books. Here, she resembles the sinister moon goddess Hecate, and places a hand over Batman’s heart: “My tearless, tell me. What be left, does it belong to me?” She causes Batman to shed a tear, and then she disappears in a miasma of black smoke.

Second, the Demon Etrigan (a devil which inhabits a man called Jason Blood and who speaks in rhymes) has been reimagined as a rapper called J Blood.

Blood looks vaguely like a burns victim – the skin on his head are a contortion of scars. When Batman confronts Blood in a nightclub, Batman finds himself surrounded by Blood’s fans, each of whom is pointing a gun at Batman’s head. When Batman calls out Blood, Blood chillingly uses magic to compel each of the gangsters to swivel and point their handguns at each other.

In a house fire, trying to save victims, Batman encounters a screaming and apparently insane man – the Spectre again? “I see through the bat – I see your heart! I hear it cry -Judas! I know what you did! I know what you did!” Is Batman being assessed by Minos, the judge of souls who appears in the beginning of Inferno?

Blood saves Batman from being pinned under a burning rafter and drags him out of the flames. Constantine mocks Blood, and Blood replies, “Fee fi fo fuck you, Englishman. I want him to suffer. This ain’t done out of pity. He’s all yours.”

The final devil Batman encounters in this issue is Harley Quinn. This is the Joker’s love interest, and a character which has accrued substantial mainstream popularity since the Suicide Squad motion picture. Here, Harley Quinn’s face is painted white in the iconic design of Dia de los Muertos. After a fight, she pumps Batman full of Joker toxin and endeavours to rape him. It is not pretty. (For non-French speakers, “petit mort”, or “little death”, is a euphemism for an orgasm.)

As Batman struggles with Harley Quinn, it is hard to know whether or not they are engaging in sex. Harley Quinn straddles Batman’s hips and he has his fingers around her throat. And there the episode ends. Batman seems to have made it with Constantine’s “help” to the second circle of hell – the bastion of carnal lust. As Dante says,

“But to that second circle of sad hell,
Where ‘mid the gust, the whirlwind, and the flaw
Of rain and hail-stones, lovers need not tell
Their sorrows. Pale were the sweet lips I saw,
Pale were the lips I kiss’d, and fair the form
I floated with, about that melancholy storm.”

It is the Fifth Circle of Hell which is dedicated to wrath. In the Fifth Circle, the ghosts of wrathful fight and feud within the foul swamp of the river Styx.  Perhaps this is where the story will end.