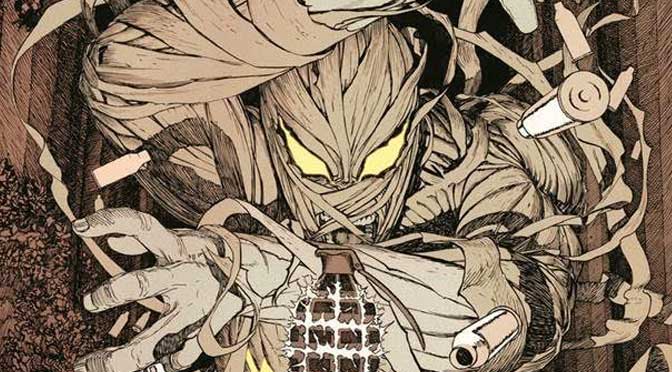 Warren Ellis appears to have been the first comic book creator to notice how many soldiers appear as superheroes in contemporary American comic books, when he wrote Avengers: Endless Wartime for Marvel Comics in 2013 and expressly observed that almost all of the core team of the Avengers superhero group were soldiers (Captain America, War Machine, the Falcon, and Captain Marvel), warriors (Thor), spies (Black Widow), or involved in the defence sector (Iron Man). (DC Comics’ characters Batwoman and the Green Lantern Hal Jordan are also ex-military.) The website FiveThirtyEight.com noted in 2015 that 1.4 million people are currently serving in the US military, around 0.4% of the population. But further,

“As of 2014, the VA estimates there were 22 million military veterans in the U.S. population. If you add their figures on veterans to the active personnel numbers mentioned above, 7.3 percent of all living Americans have served in the military at some point in their lives.
But since only 2 million veterans and about 200,000 current personnel are women, that overall percentage varies a lot by gender — 1.4 percent of all female Americans have ever served in the armed services, compared to 13.4 percent of all male Americans.”

This means that a significant percentage of the traditional demographic for superhero comics – young American men – have served or are serving in the military. This leads to a natural instinct for US publishers to render or re-render characters as military personnel or veterans. The most obvious example of that was DC Comics’ treatment of John Stewart, another Green Lantern, whereby the character was no longer an architect but was instead a former Marine sniper.

How does that relate to this new title? US publisher DC Comics’ Ragman character was introduced in a short-lived mini-series in 1976. The character is a Jewish Vietnam veteran named Rory Regan, who derived his powers from a freak accident involving the electrocution of his father and friends. This resulted in Rory somehow being transferred their aggregated bodily strength, agility, and fighting abilities.

Such an outlandish catalyst for the acquisition of super-powers was par for the course in the 1970s US comic book scene (the creators could be forgiven if the story was instead written in the 1870s, when electricity as a science was in its infancy and was just being understood). This 70s silliness is most likely the reason why this reboot has preserved many elements of the original series, but radically altered Ragman’s powers and their source.

And, yes, the character is now a combat veteran.

But that does not mean that the new origin story is any less silly. In fact, it is confrontationally serious. In this new version of Ragman, Rory Regan is now Rory Harper. Rory is trying to rebuild his life after a disastrous raid on a tomb in the Israeli desert. His entire squad died during the raid, after being ambushed by a horde of mysterious humanoid creatures with glowing eyes. Rory only survived because the contents of the tomb, a lump of rags, attached itself to him and absorbed everyone in the tomb, the souls of his dead comrades included.

The concept of sponging up souls is the potential basis of a comedy sketch involving Lucifer’s kitchen sink. But there is no humour at all in this story. The trauma of the entire incident and the loss of his friend leads to Rory having a poor recollection of the events. He finds himself almost destitute and in need of therapy. And after his return, he sees visions of the raid, and glimpses of the same creatures that ambushed them in the tomb. But this time the creatures are disguised among humans and only identifiable through the glowing eyes. These headlight eyes (unimaginatively borrowed from the 1960 British science fiction horror film, Village of the Damned, better known through John Carpenter’s 1995 motion picture of the same name), apparently, can only be seen by Rory because of the mystical rags that have now bonded to him.

Rags sticking to flesh? An Australian company called Orthocell uses collagen scaffolds for tissue reconstruction and repair. To the human eye, the scaffold looks like tissue paper. The scaffolds connect human cells. But there is nothing so scientific involved in this title. These are instead magic rags which like sticking to people. And in this case, inevitably given DC Comics is primarily a publisher of superhero comics, the rags form a mummy-esque superhero costume.

The visual impression of the character is reminiscent of Martin Pasko’s and Walt Simonson’s work on The Immortal Dr Fate #1 (1985):

A chance encounter with one of the creatures leads to the rags “reawakening”, and Rory discovering that the spirit of everyone it has absorbed is still residing within the rag costume, and can be talked to or even enslaved. There are also the enhanced abilities that the rags give him. Unlike the classic version of the character, this new version of Ragman is clearly superhuman with powers (and aesthetics) that evoke Marvel Comics’ antihero Venom, and Image Comics’ flagship character Spawn. The first issue ends with a couple of the mysterious creatures, seemingly powerful ones, attacking Rory’s father and burning down their shop. The final pages tease Rory’s rescue of his father, and further showcase of his newfound powers.

DC Comics is carpet-bombing October 2017 with Batman-related titles. And so it is a welcome sight that they have released a new comic that is not Batman-related (although it is worth pointing out that Ragman is based in Gotham City, the home of Batman, and so we entirely expect that the omnipresent Batman will appear in Ragman sooner or later). However, there are so many things wrong with this new approach to Ragman that it is hard to know where to begin.

The most obvious error in our view is an unpleasant one: the decision to set a whole chunk of a story entitled Ragman in the Middle East, and against monsters dressed in traditional Arab garb. The word “raghead” is used as an ethnic slur to denigrate Arabs. It is an editor’s job to pick up these sorts of issues. Someone clearly fell asleep at the wheel here.