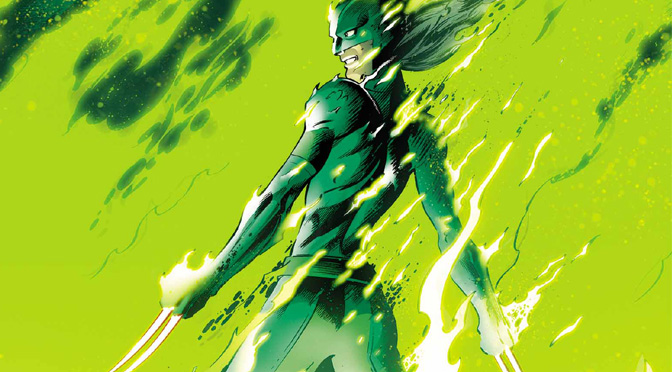 This title is one of a number of comic books currently published by Marvel Comics featuring characters from the seemingly legion members of the superpowered mutant team(s), the X-Men.

The cover features the present incarnation of Wolverine, standing within an inferno of green flame, body and hair burning away, a grin of ecstasy on her face. Wolverine is a Canadian superhero capable of hyper-fast healing of almost all wounds, has a skeleton laced with an unbreakable metal, and wields razor sharp blades made of the same material. Wolverine can suffer horrific injuries and bounce back with phenomenal pace. Traditionally Wolverine is a male character well over a hundred years old, with a chequered history of being a trained killer, a mercenary, a mobster from the South China Sea, a ninja, and more. Wolverine is arguably Marvel Comics’ most popular character. Presently, that character is dead.

The version of Wolverine in this title is the male character’s teenaged female clone. This would be a ridiculous thing save that the clone, named Laura Kinney (and historically “X-23”), has been well-crafted as a slightly sullen teenager struggling with the genetic pedigree of being a born killing machine. The character has been sympathetically written since creation. In the surprisingly entertaining title “Avengers: Arena” (Marvel Comics, 2014), this female version of Wolverine was pitted against a number of other superpowered teens, all cunningly manipulated by a villain called Arcade into fighting each other. The essentially unkillable Laura was very understandably regarded by her fellow competitors, Arcade, and readers as the favourite to win.

There are other X-Men in this title. They decide to act preemptively in respect of meeting threats and dangers across the world, ranging from Japanese gangsters, to campers caught in forest fires, to a distressed boat caught in a hurricane. These other X-Men are vastly irrelevant to the story. When the other characters talk, they talk about Laura: they wait for Laura to take the lead, to save the endangered, to take the bullets and endure the flames. Laura’s boyfriend, the flame-winged Angel, frets about their relationship and Laura’s delight in violence and injury. Only in the last few pages does Laura finally meet a threat more than her match, in the form of the Blob, a long-standing mutant adversary of the X-Men, and she is smacked about by the experienced supervillain.

In many ways this title reads like a pilot for an ongoing Wolverine series. Except, of course, there is already a title called “All-New Wolverine” featuring the character. The most intriguing aspect of this comic is that Laura seems to masochistic blur both romantic love and altruistic heroism with physical pain. That emotional dysfunction is a serious theme. It seems unlikely, but if writer Dennis Hopeless was to focus about that very adult mental disease, then the lavish attention being paid in this title to its lead character would be well worth it.