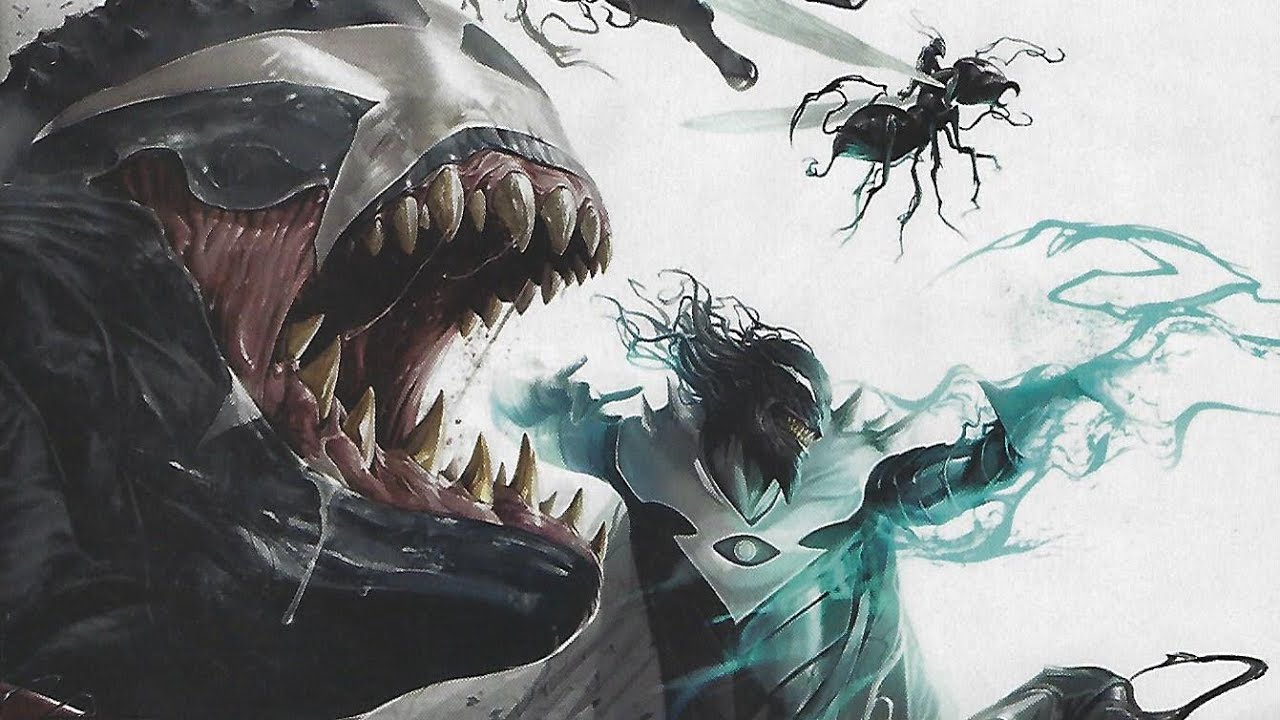 Ever have the urge to read the equivalent of something greasy, fried, and contained in a cardboard bucket? Then please read on. “Edge of Venomverse: War Stories” is a new single publication from American publisher Marvel Comics. It is a vignette to the crossover event entitled “Venomverse”. And as is the case with a publisher which thinks it is onto a good thing, this title in turn is a thematic followup to the 2014 event titled “Spider-Verse”, under which different versions of the character Spider-Man taken from different realities banded together to fight a foe that was hunting them down across time and space.

“VenomVerse” works under a similar premise. Parallel universe versions of Spider-Man’s nemesis Venom (a character that is a symbiotic alien which manifests as a black superhero costume, and which bonds with various individuals) are dragged into an alternate universe. Each help other realities’ respective Venoms fight against a powerful foe.

The remarkable aspect to this title is that it is a compendium of stories, each lasting four to six pages. That limitation of space is a highly difficult parameter within which to establish a character and provide a rudimentary plot. Accordingly, there is very little purpose in critiquing the stories found in the pages of “Edge of Venomverse: War Stories”. At best, the stories serve as a sampling of the different Venoms from alternate realities. Most of these are existing versions of Marvel’s stock super hero characters, with the only difference being their possession of the alien symbiote costume. Four to six pages is not enough to craft engaging stories out of these characters.

In our view, the Venomverse concept is a thematic re-thread of the Spider-Verse concept. This new comic book event lacks any semblance of novelty. The Spider-Verse concept itself was silly but was salvaged by, first, the novelty of seeing existing superhero character concepts being given a Spider-Man treatment, and, second, decent writing. The writing in turn benefited from the use of plot devices and established characters that was already present in Spider-Man’s lengthy history. Neither is applicable in this case.

Overall, this is the literary equivalent of the tasting plate of a fast food franchise, a disappointing assessment given the veteran skills of the ensemble of the writers. Those devoted fans of the Venom property and are looking for the comic book version of chicken nuggets can make do with a couple of the stories contained within:

a. a disabled former female athlete who came into possession of an alien symbiote and became her reality’s new Black Panther (after the previous one was killed in front of her eyes);

b. an alternate reality’s version of evil mastermind Doctor Doom, who is in possession of an alien symbiote but has a will so strong that he managed to subdue the costume’s consciousness, as opposed to developing a symbiotic relationship.

The rest of the stories are Venom-ized versions of existing superheroes that do not differ from the mainstream versions in both look and personality, making the stories feel more like glorified internet fan fiction than a story from Marvel Comics, which once touted itself as “the House of Ideas”. The only guarantee from this title is indigestion.