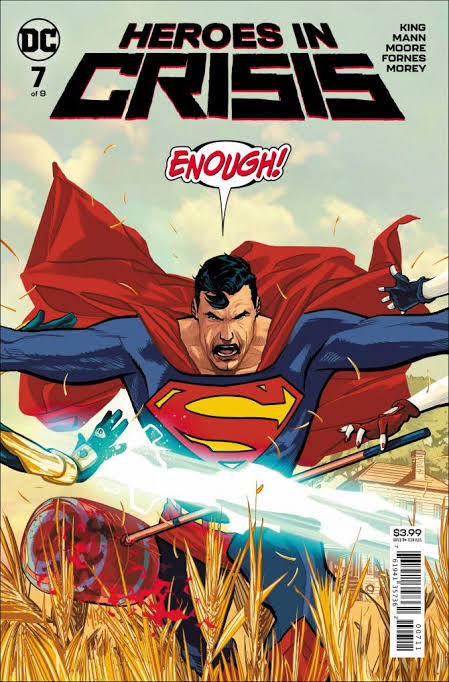 We have previously reviewed Heroes in Crisis #1-3  – and favourably, noting that for the first time, an American comic book publisher is treating mental health as something other than the secret origin of the supervillain-of-the-week.

But with this latest issue, American writer Tom King is now steering very close to the editorial mandate given to him by publisher DC Comics. Somehow, Mr King has to integrate into what started out as a respectably serious story about post-traumatic stress disorder suffered by superheroes some editing of DC Comics’ continuity. The issue seems to be to do with The Flash. The Flash is a superhero who can run very, very fast – in some iterations, faster than time. There are usually a few Flashes about. This time, we have two Flashes in play – the Silver Age version, a police scientist named Barry Allen, and his successor, Wally West. West’s adventures before the most recent reboot of DC Comics’ continuity involved a wife named Linda. West talks about it during a therapy session, depicted in this issue:
“Oh, and I had this whole family and love and stuff. I keep talking about that. And they got crushed by a time crisis multi something. Which was caused by Barry. And they’re gone for good and everyone wants me to be a symbol of hope.”

Mr King is being churlish. West’s description of what happened to his family is pretty much how casual readers of superhero comic books describe the major publishers’ myriad annual “the universe is in peril” story events. West cannot properly articulate how his family disappeared from reality, and neither can most of Mr King’s readers.

Otherwise, Mr King engaged in some amusing effects with The (other) Flash, including the sound effect of The Flash running back to the Batcave:

This story approaches its last issue and we expect it will rebuild West’s life, somehow, so that the tragedy of his circumstances are erased and some beloved storyline is reintroduced into DC Comics’ continuity. A shame if true.