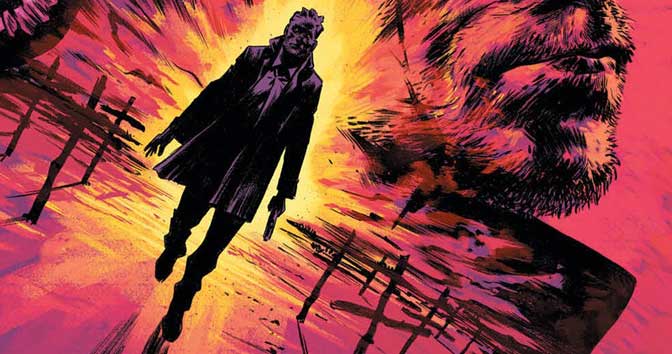 Lucas Stand: Inner Demons is a new comic book mini-series from American publisher BOOM! Studios. It is a continuation of the original Lucas Stand comic book, which is notable for being a creator-owned project of TV producer Kurt Sutter (known for the Sons of Anarchy television series.)

The Lucas Stand series follows a former military special-ops veteran who, upon reintegration into society, finds it so difficult to live a normal life that he tries to commit suicide. But before he is successful, Stand is confronted by an entity named Gadrel. Stand is recruited to be an enforcer/hitman, with the task of sending back demons who have escaped from Hell. The unique bent of the story is that these escaped demons have escaped through different time periods. Stand must travel through time and hunt down demons who are hiding in different parts of history.

Lucas Stand: Inner Demons drops readers in on Stand as he is in the final stages of his employment, with one final demon named Penemue to hunt down. The magical artifact he is using to travel through time becomes disconnected from the entity it relies on to work, resulting in Stand’s travels through time becoming unreliable, painful, and dangerous. The issue follows a broken-down and barely coherent Stand going back to the 1970s, in order to find a person who can fix his defective artefact.

But Stand arrives too late. The person has already died in the year he arrived. Luckily, the person’s daughter took on the family business. In exchange for Stand protecting her shop from demon extortionists, she fixes Stand’s artefact. But the repair is not completely successful, as it can now only make short hops through time, and requires regular recharging.

The story does not waste time on the hunt for Penemue. In fact, this female demon that Stand has obsessively hunted down throughout the ages only serves as an introduction to the true enemy. After following Penemue’s tracks through different time periods, Stand finally catches up to the demon as she lays dying. She is a victim of an attack from a new enemy who arrives to kill Stand as well. A blinding light hides this new enemy save for its silhouette, but it is apparently strong enough to scare even the implacable Stand. It is only by destroying the magical artefact that he was able to escape. The catch is that he is sent hurtling through time, and accidentally stranded in an unknown time period. The issue ends with a teaser scene of Stand waking up near a seaport and being approached by a group of men.

While the comic does provide well-written flashbacks that explain what led to Stand’s current predicament, it is not enough to surmount inherent reliance on familiarity with the original series. The Lucas Stand franchise is a dense story that requires reading up on the previous story. If not, this new series will make the character completely unrelatable and one-dimensional. So new readers are advised to seek out the original series first (which fortunately has now been collected into a single 161-page volume.)

For fans who are up to date, on the other hand, Lucas Stand: Inner Demons is a decent continuation of the story, if a little bit shaky in its plot. Many of the things that the Lucas Stand series used as a ballast, including Lucas’ magical artefact and his demon handler, are gone. The significant plot development is that the title character is facing an entirely new enemy. The demon hunter flavor (an echo of the popular series Hellboy) is also diluted, at the very least, as it looks like this new enemy is most likely not from Hell. It will be interesting to see where it all goes.