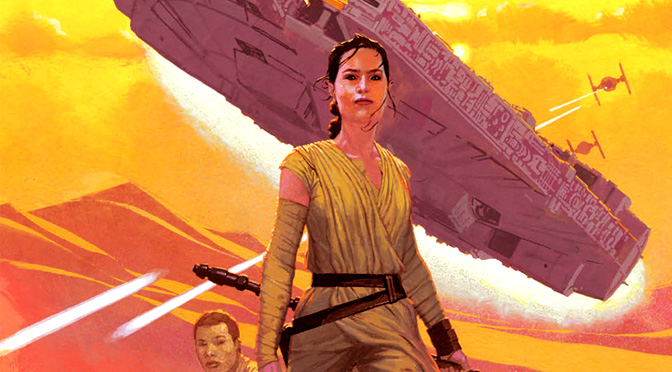 This is a six issue mini-series by Marvel Comics based upon the movie, “Star Wars: The Force Awakens” (2015, LucasFilms Ltd / Walt Disney Studios).

“Star Wars” comic book adaptions are very popular, and recent spin-off titles have centred many of the main characters (we have recently reviewed “Vader Down”, by way of one example). Some of these stories are bubbling with creativity, fuelled by the sheer enthusiasm which so many imaginative and ardent writers have for the franchise.

With that in mind, we warn you: Do not buy this comic book if you expect that the title contains anything new.

It does not contain any tangential plot lines arising from the motion picture. It does not contain any new backstory to any of the characters. In promoting this title, Marvel Comics should have (but did not) make it extremely apparent from the copy on the cover that this comic is a very strict film adaption. The story does not deviate at all from the movie, save that it is an edited version of the first few chapter of the movie plot. Here is an example:

Granted, Disney are very unlikely to let any creative impulse interfere in the execution of the movie. In addition, Disney have caused much fan hatred with the erasure of the Star Wars “Extended Universe” and particularly the reversal of existence of the very popular female character Mara Jade.

Accordingly, Disney may not want to create an entirely new Extended Universe and have that potentially interfere in the direction of the motion pictures, or spark more outrage from fanatics.

But the purpose of the comic is not apparent given it regurgitates the movie in paper form, which will suit a certain category of avid collectors. It is deeply disappointing for those seeking or expecting new direction in the story, or even additional back story. Chuck Wendig has the very dubious honour of being described as the writer: but in reality he is an editor, paring away at dialogue from the movie.

The “Star Wars” franchise is fundamentally a business: a money sieve with a fine particle size, designed to extract as much as possible from the cross-generational legion of fans. But this, an absolute recycling of the movie: this is droll.