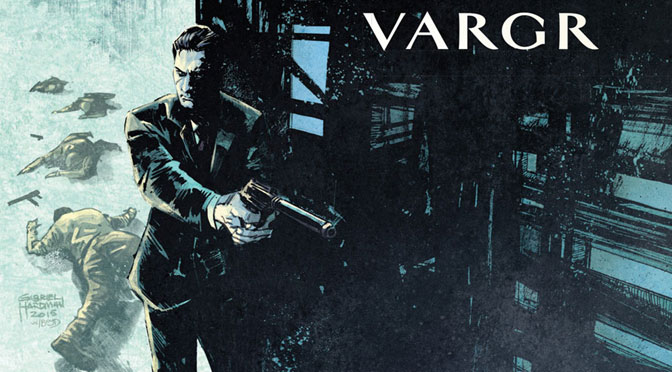 It seems obvious that, given the project of writing a James Bond story, British writer Warren Ellis was always going to return to the source material. Ian Fleming, the English spy who wrote the original James Bond novels from 1953, portrayed the title character as something other than an exemplary English gentleman and Mr Ellis has mixed some of this into the story. One of the characters in this comic notes that Bond does not actually smile with his eyes. Bond’s experiences, Mr Ellis wants you to know, have robbed Bond of any genuine warmth and humour.

Mr Ellis also pays homage to some of Bond’s many adversaries. Kurjak, the mastermind of the piece, is missing his left hand. The villainous Dr No from the third Bond novel by Mr Fleming (1956) was missing both hands and replaced them with mechanised claws. Kurjak has his hand replaced by inhumanly strong cybernetic prosthesis. Kurjak’s muscle, Masters, thrives on pain, as the terrorist Renard in the 1999 Bond movie “Die Another Day” feels no pain (Mr Ellis contrives an ingenious method of dispatching Masters: Bond injects him with oxycontin and the villain is unable to process the pleasure).

Further, Mr Ellis’ acerbic wit is missing from this tale. As we have described before in our review of “Karnak” 1, Mr Ellis often gives his lead males the task of being more clever, insightful and sardonic than their peers. But Mr Ellis has not done that here. There is nothing exceptional on the face of it about Bond. The violence is impersonal, almost polite in its brutality.

In such ways Mr Ellis writes a classic Bond.

Mr Ellis’ Bond is a little slippery, a little lucky, and a seasoned improviser. Bond’s personality is in this story a thinly sugar-coated venom. The charm is there, but it used like an accessory, or an affection like the cigarettes and the bourbon. There is some clever characterisation in that. Bond is relentless and his charming ways are something he acknowledges in himself but they do not define him. The mission alone gives definition to the man.

Bond is an instrument of the “people who learned the trade when it was just states and empires rattling sabres across the world” as the character puts it in issue 2. During the Crimean War (1853-1856), the last international Christian sectarian skirmish which pitted the British, Napoleon III’s France, and the Ottoman Empire against Imperial Russia, the British Army’s commanders were so incompetent that through a combination of abrasive personalities, stubbornness and poor signalling, the mounted cavalry division called the Light Brigade ludicrously charged a line of Russian cannons. Most of the Light Brigade were blown up. One exceptional survivor was the Brigade’s commander, Lord Cardigan, a stupid, titled thug who should have known better. One envisages Lord Cardigan on his horse, first waving his fellow horsemen on sabre aloft, and into near certain death, and then hacking away at the Russian bombardiers. Bond is like Lord Cardigan’s sabre. The character does not question, and in fact does not reveal much at all. Bond kills Masters, butchers a cohort of gangsters who happen to be in the way, kills his German driver. One of the Berlin station officers says with a wry grin, “An actual 00 agent. In Berlin, even. Kind of surreal. You get that little chill from the Cold War when you think about it.” Bond is a sharp and lethal relic from the days of British imperialism.

As Mr Ellis is true to the Fleming novels, some of the more arcane parts of the Bond mythos as seen in the films are missing. There are no gadgets, no cybernetically-cloaked cars, no arcane weapons. There is just Bond and his Beretta pistol – a small gun for women, and as such is a choice of weapon for which Bond is mocked. In issue 2 of “Vargr” the Berlin station chief, Carney, is handling Bond’s Beretta and says, “Funny little thing, isn’t it?” Bond replies, “Don’t you start.” This is an homage to General Boothryd’s famous letter to Mr Fleming in 1956, where the retired army officer complained about Bond being armed with “a lady’s gun”. This complaint was utilised in Mr Fleming’s novel “Dr No”. Mr Ellis ensures that Mr Fleming’s creative pedigree is thereby perpetuated.

Mr Ellis, in an interview with Bleeding Cool news in September 2016 noted that “vargr” was an Old Norse word for “wolf” or “evildoer”. One wonders if the title properly describes the drug plaguing London and which is linked to Bond’s mission, or whether it better describes the wolfish, destructive Bond written by Mr Ellis in this dry, entertaining adventure story.