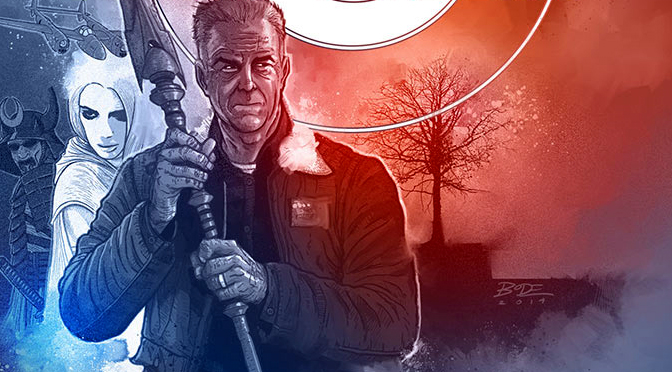 This comic, written by Jonathan Hickman, features about a third of the way into the first issue an assembled cult of ostensible villains, shouting the words “Bah al sharur!” at their leader. According to Wikipedia, “”Sharur”, which means “smasher of thousands” is the weapon and mythic symbol of the god Ninurta. Sumerian mythic sources describe it as an enchanted talking mace. It has been suggested as a possible precursor for similar objects in other mythology such as Arthurian lore.”

Ninurta the mystical being who wields Sharur, is the Sumerian and Akkadian god of hunting and war. Thus, too, a retired American soldier Edward Canning is told by a pale and sinister man known as The Bishop, “It’s time for you to hunt again, Colonel”, and this first issue sets the scene for the start of that hunt.

References and imagery relating to mythology and cultural motifs abound in this comic:

a. A man named Amistad Osiris (“Osiris” being the Egyptian god of the afterlife) is murdered by a horde of masked gunman at his wedding;

b. A mysterious, pale and scarred being called The Courier, apparently invisible to third parties, delivers Canning to a remote church in the Texan desert. The Courier’s references to being a victim of judgment – “As I am not a judge, but one that has been judged… once I was something more, and now I am less – one of the cast out” and being a proponent of choice (the exercise of free will) sound positively Luciferian;

c. Canning is lead down an enormous set of stairs to a boat on a river, steered a hooded ferryman, who is to convey them to a place simply called “The City”. This is an obvious reference to Charon, the entity in Grteek mythology who brings the dead across the River Styx and into the afterlife;

d. Canning is not permitted to eat or drink while underground. This is an allusion to the Greek myth of Persephone and the pomegranates: those who taste food in the underworld may not return to the land of the living;

e. There is an extended dialogue involving Canning concerning the Tree of Life;

With all of this at play, a reader could be easily bamboozled into confusion. But the plot doesn’t fall into the Alan Moore-esque trap of getting carried away with symbology. The opening chapter has the reader witness espionage, sex, mysterious secrets, and utter carnage all contained within the first eleven pages of what starts out as a trophy wife wedding. This fast-paced action is overlaid by a slow and haunting boxed monologue on the nature of aging, dying, and death, presumably delivered by Canning. The prima facie villains of the piece fly to a perilous secret cavern hidden amidst snow and mountains in Germany, and the location, the uniform of their leader, the vintage jet aircraft, and the fact that all of the women’s features are identical make you wonder whether there is some sort of Nazi-cloning subplot at play. This is all done with an admirable economy of dialogue.

But this sparseness of dialogue is soon turned on its head as the action ceases:

a. Canning’s wife is dying of cancer in New Mexico. The Courier taunts Canning by reciting the pithy, practiced statements of doctors at hospices half-heartedly assuring the families of dying patients. Later, The Courrier says, “I don’t want you to think I’m being cruel, Colonel. Or that I’m taunting you… it’s the opposite in fact”, when plainly he has been cruel and taunting. The Courier is petty, easily miffed, is resentful about his reduced role, and likes to make grand speeches. The character exudes veiled menace and the reader is entitled to think that The Courier will be back in subsequent issues, and will be trouble;

b. The City’s Second, Shurra, is haughty and dismissive, and she wastes no time first denigrating Canning – “And since my arrival, no citizen’s eyes have seen what shameful act they witness today. Natural, of course, as your kind are not welcome here” – and then getting into a fight with him as to who knows more about the history of the City and Canning’s lack of respect;

c. And the ever-broadening river of dialogue becomes a flood with the entry on stage of the spider-ish character called The Bishop. The Bishop speaks plainly about wanting to avoid the “traditional games of lies and misdirection” – he is in a hurry to address the threat of Bah al Shurur. Yet this does not interfere in his verbosity, his extended monologues on religion, culture, and morality as being gifts from his people to humanity, on the nature of bravery, and on aging. The Bishop’s extended ruminations are a nice counterpoint to Canning’s blunt, Midwestern way of looking at the world, assessing it, and offering decisive solutions. This Bishop talks: the Colonel acts, and that is why The Bishop needs the Colonel to deal with their looming catastrophe.

This title has the same touchpoints of re-worked mythology like Mr Hickman’s other epic, “East of West”, and featuring the same strong dialogue. It offers much promise.