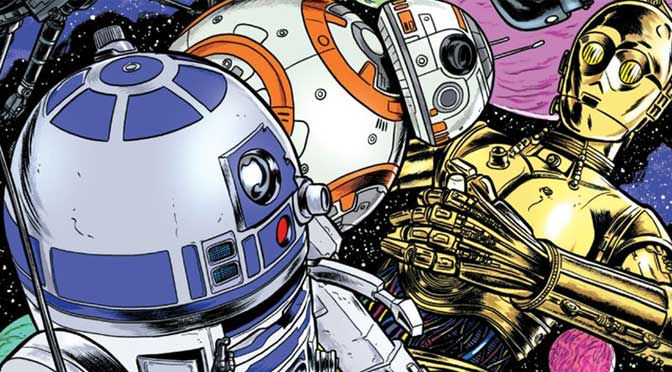 The first story follows Darth Maul’s droids on a desert planet called Tattooine (a place which features prominently in the motion pictures). One droid encounters and assists another unnamed droid trapped under a boulder (for undisclosed reasons.) The gesture is repaid when Maul’s droid is captured by Jawas. These are small, hooded creatures who live in the desert and scavenge for a living. It is a story of robotic quid pro quo.

The second story focuses on the droid called R2-D2, a character with much significance in the motion pictures. It is given the task of gathering supplies from a room full of junk parts and other droids in anticipation of a flight mission by his master, Luke Skywalker. At first glance, this story is better fleshed out due to ample dialogue provided by guest characters Luke Skywalker and Leia Organa. These are the two central characters to the initial movies, and they are the ones responsible for giving R2-D2 the task. But the truth is that this story is actually more shallow than the previous one. There is no point to it except to highlight that R2-D2 is clumsy and easily scared. The bewildering punchline is that all the trouble R2-D2 had to go through – which includes electrically shocking another droid – is for nothing, as Luke Skywalker’s mission was cancelled.

The third one is as cheesy as it is cliched: it has franchise newcomer BB-8 trying to play cupid to two Resistance soldiers. In the story, the droid tries to pair up a female resistance engineer with a male resistance pilot. BB-8 tries this by stealing parts from the pilot’s ship and dropping it at the engineer’s work area. The end result is that the two resistance soldiers find a reason to talk to each other, and, conveniently, ended up liking each other.

In most backup stories, readers should not expect any depth or substance. This is entirely true here. All three tales mainly revolve around the droids stumbling around and relying on their trade mark sounds in the place of dialogue. Some of the stories advance the plot through clumsiness (which is odd, given that you would expect highly advanced, mass produced robots to be efficient. Perhaps we are overthinking things.)

“Star Wars: Droids Unplugged” serve no purpose other than to show why these three stories were only meant as humorous bonus content to more substantial “Star Wars” stories. We think it is not enough to say that these droids cannot be a source of sufficient material so as to be entitled to their own comic. The plain fact is that these stories are banal and the product of little effort. The target market is that niche of readers who will buy anything “Star Wars”-related, even if almost entirely devoid of quality.