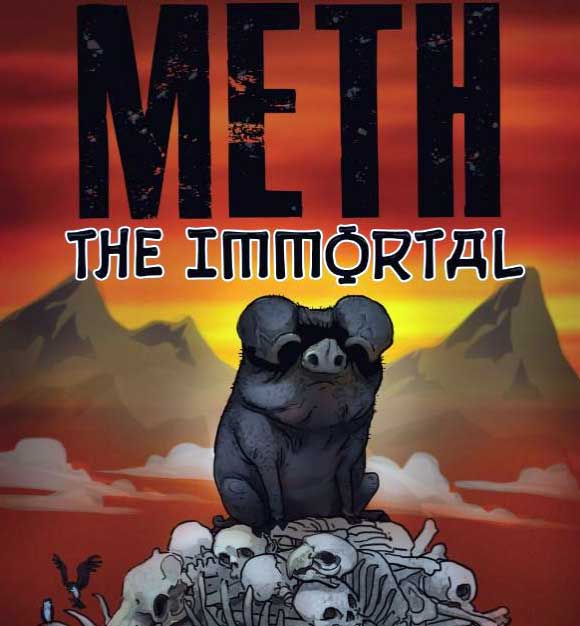 “But of the tree of the knowledge of good and evil you shall not eat, for in the day that you eat of it you shall surely die.” (Genesis 2:17)

Apparently God’s proscription on the consumption of holy fruit does not apply to those of cloven foot. Meth the Immortal is a quirky tale regarding a pig which has eaten an apple from the Tree of Knowledge in the Garden of Eden. As a consequence, the pig is immortal, impervious to harm, multilingual, very intelligent, and charismatic to other pigs. (He would do well on Tinder.)

The copy for this comic reads as follows:

Methuselah, Meth for short, is a pig who accidentally gained immortality–and a whole lot more–back at the beginning of time, and he’s been trying to figure out what to do with his special abilities ever since. All that is about to change. The first issue in an ongoing series, it’s 32 pages long and is appropriate for ages 12 and up.

The story is superficially very funny. That a pig should possess such quasi-godlike attributes is an ironic twist on the usual tales of immortal beings. The sonorous woes of the immortals in Neil Gaiman’s The Sandman, Mike Carey’s Lucifer, and before that, Anne Rice’s Lestat vampire novels have conditioned readers to consider immortality as the curse of both gods and humans. Those they love die, and time’s passage is an intolerable shriek of changing styles, technology and mindsets. Meth the Pig (“meth” being an abbreviation of “Methuselah”) suffers from the same haunting perspective of time’s passage. But being a pig, it is brings the sobs of the ethereal back to earth with a muddy thud.

The story is for the most part a monologue from Meth. Meth is decidedly chatty. He is also dourly philosophical about humanity and it’s never-ending warfare.

The story takes Meth into the hinterlands of ISIS held territory in Syria or Iraq. Meth saves a (as yet unnamed) boy and nurses him back to health. The boy at first thinks he is in hell and then thinks he is mad. Meth and the boy end up saving a American from execution by Islamist extremists. The American is trying to save a temple. The rescue occurs when the pigs charge the ISIS fighters and cause them to scatter. It is a curious tangent for the comic, to venture into such serious territory. Yet somehow, it works.

It is early days yet for Meth the Immortal. This is only the first issue. But it shows much promise.

The comic is available on Kindle, Amazon, and on the official website.