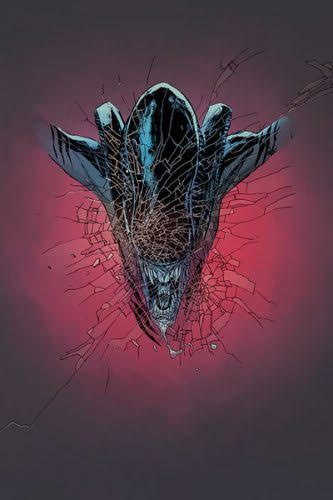 You would be forgiven for thinking that this is Alien week for us. But this second review this week does not follow the long roll-out of Brian Wood’s epic Aliens story published by Dark Horse Comics. It instead contemplates a story which was a breath away from being a motion picture, but instead over thirty years later has become a comic.

We have previously looked at issues 1 and 2 of this series, Alien3. We were very positive in our assessment of the transformation of the unused screenplay, penned William Gibson, into a comic book. That assessment has not changed with this third issue.

We had previously noted that the UPP stands as a future evolution of the Union of Socialist Soviet Republics and the People’s Republic of China. There is use of the linguistic ideological dogmatism which sets those characters apart from the inhabitants of Anchorpoint, the space station owned by the malevolent and very capitalist corporation called Weyland-Yutani. “Defeatist! We work for the good of the Union,” snorts a character in the first page of this issue, and it is startling to revisit that sort of dogma. The UPP cosmonauts work in their own space station, called Rodina. Like Weyland-Yutani, the UPP scientists are working towards weaponising the xenomorph biology (“xenomorph” being the term used in the Alien mythos to describe the hideous monsters which are the villains of the story). But the Rodina serves as the warning as to what inevitably goes wrong when trying to harness a xenomorph. In a brilliant cut shot, the Rodina has become a war zone. The UPP crew are either trying to retreat from a rabid xenomorph, or have been impregnated and bound with slime. Nevsky, the “colonel-doctor” who leads the bio lab on the Rodina, is stricken and in terror. In the meantime, a UPP battle cruiser called the Nikolai Stoiko sneaks towards the Rodina. Those who have read the screenplay know that the Stoiko will destroy the Rodina and prevent the further spread of the xenomorph into UPP territory – a purge in the classic Soviet style.  When Mr Gibson wrote the original screenplay in 1987, the Soviet Union was wobbling but still the implacable adversary of the West in the ideological struggle of the Cold War. The West’s present troubles with Russia stem from issues other than ideology.

If the manifestation of the Soviet mentality is jarring to contemporary readers, the dialogue from the reactivated android Bishop is much more familiar. At the conclusion of the second motion picture, Bishop was torn in two by a xenomorph Queen. Here, the UPP recovered his body (as described in our previous review), patched him up, and in this issue delivers him to Anchorpoint. Bishop exhibits signs of trauma: “The damage I sustained resulted in partial erasure of data-retention. My verbal banks record the statement, “Not bad for a human.” But the context is missing.” This is the sort of guileless exchange – full, frank, and helpful –  we have come to expect from the various devices we use on a daily basis.

Lest we forget, the Alien franchise is as much about horror as science fiction. Mr Gibson slowly builds up the horror, and in this issue it starts to manifest in sneak attacks by a xenomorph which was a stowaway on the Sulaco, the military transport which has conveyed the characters from the second movie from LV-426 (the ravaged planet which had been over-run by xenomorphs) to Anchorpoint. Weyland-Yutani’s efforts to grow xenomorphs in a lab become catastrophic as one of them cracks its  culture chamber and tries to attack a scientist called Tully. The scientists, along with Corporal Hicks, a survivor of the Sulaco, resolve to destroy the cultures. An unsettling sense of menace sits in every page.

Mr Gibson was, really, just beginning to flex his story-telling prowess in the late 1980s. This comic is testament to that skill.