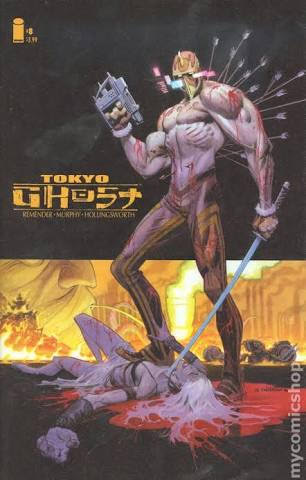 Primitivism, the melange of both wistful fantasy and philosophy, is founded in the premise that a simpler life is inherently better than the complexity of modern life. It has its Anglophone origins with Matthew Arnold, an English writer who espoused through his work the primacy of the agrarian life. When the reader scratches away at the high gloss, lurid colours of Tokyo Ghost, the core concept is one of primitivism, albeit one with a very contemporary overlay. It is a rare day we can say that a comic is influenced by the combination of Judge Dredd, Frank Miller, Mad Max, and Matthew Arnold.

Social Media Addictions of the Future

Tokyo Ghost is perhaps more than just superficially lurid. The sheen is positively kaleidoscopic. Set in a dystopian future (is there any other kind anymore?), the series is plainly influenced by the evergreen British punk science fiction comic 2000AD. One of the two protagonists, Led Dent (also known as “Teddy” by his lover, partner, and later adversary Debbie Decay) is a 2017 re-rendering of Judge Dredd. Judge Dredd is a ruthless, helmeted lawman in a post-apocalyptic United States, who, like Led Dent, dispenses justice using a high-powered gun and an enormous futuristic yellow motorcycle. Led Dent does not have Dredd’s black costume, but the two characters are of the same hue. Perhaps the only major differences between the two characters are that:

a. Dent is addicted to a future version of the internet. Vast channels of puerile content simultaneously poured into the character’s Machine Age helmet by way of an augmented reality network are a constant distraction and render Dent in essence subhuman – an enormous weakness which Dredd would never permit himself. Luminous panels dance around Dent’s head, spewing pointless content. This addiction is a very pointed commentary on social media, an extrapolation of the zombifying methods of Facebook,
Snapchat, and Instagram. (It will immediately resonate to those of us with teenage children);

b. Dent has a sad backstory. Dent, as Teddy, grew up with Debbie in a grim environment where their respective parents are so addicted to online content that it would take a monumental effort to recognise and want to respond to thirst. Forced to fend for themselves, the two as young teens try to grow their own crops in abandoned attics. A window smashed in a storm leads to acid rain washing out the crops. The rain is so poisonous that the two children cannot save their plants from being scorched by the rain. Life is bleak for uncared-for children in an urban nightmare.

Both Dredd and Dent also battle the same sorts of freaks. For Dredd, these are usually colourful, cyborg or mutant law breakers. For Dent, the same sort of absurdity applies. Dent fights ridiculously-themed murderers and terrorists, who cause outrageous destruction on a grand scale – most strikingly, when an enormous zeppelin crashes into a skyscraper accompanied by a bright orange and red blossom of fire as thousands of lives are lost.

Frank Miller’s influences are very apparent in Tokyo Ghost, too. Where does Matthew Arnold end and Frank Miller begin? Tokyo is a serene paradise (the characters are dressed in white, brown and beige) where there are no electronics and the people live in calm coexistence with nature (primitivism) but are all improbably skilled ninjas in a quasi-personality cult (Miller).

Having wiped out the population of Tokyo and determined that the United States is beyond repair, the deranged, oversexed and pantless President decides to leave, taking an entourage of foul sycophants and the true villain of the story, the drearily stereotypical psychopath Davey Trauma. As with Frank Miller’s Ronin (1983), swords seem to have a cleansing quality, especially when one is the conduit for a bright blue electromagnetic pulse, and all of the villains plus Dent meet their fates in slices.

But the plot – a vengeful shaman (a transformed Debbie Decay) from a destroyed community in Japan, armed with an electromagnetic sword, must battle her mind-controlled life partner – is actually as bad as it sounds. Only the flourishes, the neon lime and purple madness, carry Tokyo Ghost across the line.

Mr Remender is a superb teller of stories. Despite being collected in a deluxe hardcover volume, Tokyo Ghost is not one of his better efforts.