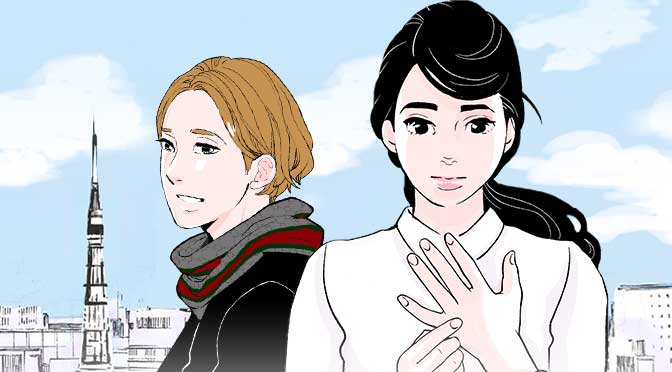 The series is written by Akiko Higashimura. Higashimura is best known for two manga series, Princess Jellyfish and Tokyo Tarareba Girls. Both titles concluded in 2017.

Gisou Furin is the story of a woman who while traveling overseas to escape her marriage and its burdens, meets a handsome stranger on a plane.

Regrettably, the prologue does not give away much:

The blonde stranger says, “Atama” (meaning, “Head”). The woman asks, “Are you alright?” The balance of the very short prologue involves the woman contemplating the removal of her wedding ring while standing on a balcony with a Japanese cityscape in the background, and then, cheeks burning, being handed it while apparently looking for it on the floor of the aircraft.

そもそも(“Somosomo” – “to begin with”), indeed. The prologue is more of a teaser than a genuine introduction. The first full chapter will be released on 23 December 2017.