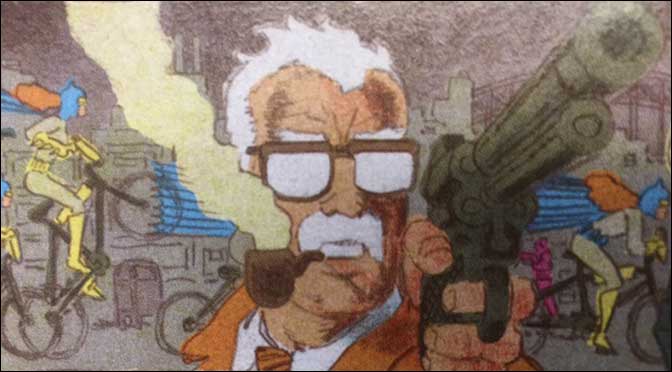 Gerard Way, musician and writer of the extraordinary comic book title”The Umbrella Academy”, as we have previously discussed in our review of “Mother Panic“, is in an enviable place. Mr Way has been given the reins of American publisher DC Comics’ new “alt-rock” imprint, Young Animal.

With titles like the stuttering reincarnation of “Lucifer”, and “Ever After”, a dull sequel to the commercially successful and critically acclaimed “Fables”, DC Comics’ usual alternative content imprint, Vertigo Comics, presently exhibits all the excitement of an ageing passenger jet in an extended holding pattern. It won’t crash, but every indicator is that a last flight is imminent. The only notable exception to that assessment is Gail Simone’s chilling “Clean Room” (we have previously looked at issue 1 and soon we will review the collected edition). Vertigo Comics was once the go-to for groundbreaking content like Neil Gaiman’s “The Sandman”, and off-beat reinventions of DC Comics’ considerable treasury of obscure character properties, such as “Doom Patrol”, “Shade the Changing Man”, and “Kid Eternity”. Young Animal appears to be Vertigo Comics’ successor, supercharged by Mr Way’s star power (both via “The Umbrella Academy” and through his career in the band “My Chemical Romance”) and considerable creative talent.

But Mr Way seems to have fallen into a trap of self-indulgence. Having been given the keys to the garage, he decides to take out for a spin long-forgotten characters to form a stale narrative with a quirky title, “Cave Carson has a Cybernetic Eye”. Published as a series of forgettable adventure stories in 1960, the character Cave Carson is a subterranean explorer. In Mr Way’s tale, Carson’s wife has died. Carson spends most of the first issue grieving, and the rest blandly interacting with what seems to be Mr Way’s other old favourites from the 1970s and 1980s, The Metal Men and Wild Dog. In that sense Mr Way’s target market for this title appears to be middle aged men with long memories for unremarkable comic books.

Much more interesting is Tom Scioli’s back up feature, “Super Powers”. In 1984, DC Comics published a vapid five issue series under this brand as promotional collateral to a toy figurine offering. Mr Scioli’s text is, on the other hand, weird, wonderful and unexpected. It offers the beginning of the hallucinogenic alien origin of the Wonder Twins, a pair of teen characters appearing in a Saturday morning television cartoon entitled “Super Friends” dating back to 1973. The twins race through the skies on glowing blue unicorn tigers, and prance about in starched collars and lace like effete dandies. Suddenly Jayna, the female twin, breaks out in a scale-like rash and she runs away in shame at her appearance. We suspect this is a description of the onset of her superpower, as described in the cartoon: metamorphosis into any animal on command.

The story then flickers to a bizarre confrontation between Batman’s longstanding adversary The Joker and his “JokeTroopers”, and a bicycle riding Batgirl. Five rectangular panels are spent focusing on sparkles generated by Batgirl’s bicycle’s back wheel: seven panels are spent in an image of the Joker’s face, painted onto the front of a tank, cruising up and over an urban hill. Upon the Joker being defeated, Batgirl pulls her bicycle into a wheelie of victory, the image buried behind Commissioner Gordon’s pipe smoking “Dirty Harry” homage.

This is trippy and oblique. It does not disrespect the characters but it sits on the rule book. We might have hoped that the rest of “Cave Carson has a Cybernetic Eye” was cut from the same the same cloth. It is not, but we will happily take Mr Scioli’s three page of fun nonetheless.