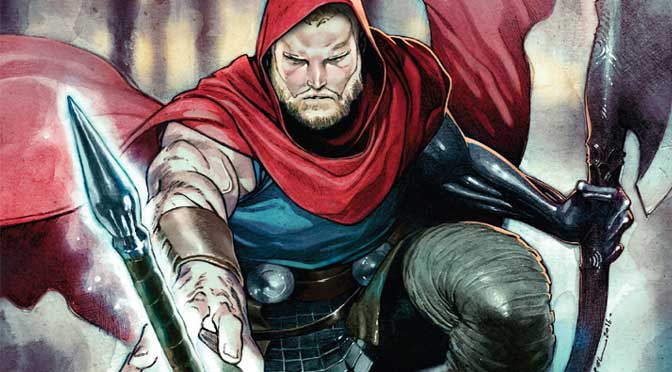 Over the course of the past four years, comic book writer Jason Aaron has taken a creatively stagnant title, Marvel Comics’ “Thor”, and radically increased sales which, amongst other commercial successes, caused Marvel Comics to engage Mr Aaron on an exclusive basis. The decision to cause the mantle of Thor to pass to a woman has caused upset amongst fans and the right wing media, but as we have previously discussed, the quality of writing and execution of this dramatic change in direction by Mr Aaron should properly have silenced any critics.

But for those who think that the hammer of Thor should have remained in the hands of a man and that the original Thor should not have been replaced, Mr Aaron revisits the character in this new title, “The Unworthy Thor.” The title makes the conundrum plain: the hammer which embodies the power of the thunder god can only be wielded by a being who is “worthy”. Thor has, by a mysterious machination involving a whispered secret, been deprived of that ability. The new female Thor, Jane Foster, is on the other hand worthy. This is because she falls further into the grip of late stage cancer every time she wields the hammer for the benefit of others, and in that sacrifice is manifestly worthy of the power of thunder and lightning.

The plot of this first issue is very plainly laid out. First, Thor is seeking the hammer of a Thor from an alternate universe. This is the weapon of the unfortunate character which appeared in Marvel Comics’ “Ultimate” line of comic books (the initial commercial success of which was extinguished in the late 2000s), and was killed in Marvel Comics’ “Thors” (about which we have written before). Recovery of this hammer and, with it, the power of being the god of thunder is the principle preoccupation of the title character, triggered by the revelation of other hammer’s existence by a mysterious new character called “The Unseen” (we suspect that this slender figure is Thor’s mother, Freya, in disguise). Indeed, it seems any hammer will do: in the closing pages, a well-established alien who also possesses the power Thor, known as “Beta Ray Bill”, offers Thor his hammer. We suspect the second issue will reveal that even if Thor was willing to take it, as he is “unworthy”, he would not be able to wield it.

Thor’s overwhelming desire to recover his lost grandeur is a little unpleasant and decidedly unheroic. This is an very new and interesting character element introduced by Mr Aaron. Lord Acton’s famous quotation, “Power tends to corrupt, and absolute power corrupts absolutely. Great men are almost always bad men” applies here in a very stark way. In the opening sequence, Thor battles a horde of aliens and is overwhelmed by numbers, all in a brutal, hungering effort to touch this new hammer from the other universe. Thor is an altruistic character without doubt, but the power of the hammer is a drug and Thor is by his actions desperate to possess it again.

The other character development introduced by Mr Aaron is Thor’s self-pity and self-loathing. “Gods I hate trolls,” we read in inner monologue, “almost as much as I hate…”. This is the perhaps the manifestation of withdrawal from addiction. Thor spends much time engaging in violence and drinking, trying to cope with his shattered sense of worth arising from the loss of his hammer to a more worthy wielder. This is decidedly unheroic behaviour. We do not know the whispered words which caused Thor to lose his worthiness, but we wonder whether the essence of it is a self-fulfilling prophesy: that if deprived of the hammer, Thor would not rise above his self-loathing and desperation for its recovery. The despair felt by the character is reinforced by the contempt shown to him by his foes: mid-battle, the king of the trolls scorns Thor as a “worm”.

The word “addiction” is never mentioned in the issue, and indeed has not been mentioned in any comic featuring Thor since Mr Aaron took up the writing the title(s). But while a reader might feel sorry for the wounded soul of Thor, at the same time there is a small sense of revulsion at his newly exposed flaws. The great hero is no longer great, and through the loss of that greatness he is also no longer a hero. He has rendered himself even more unworthy. Whether Mr Aaron allows the character the opportunity to redeem himself, however, makes the title entirely worthy of reading.