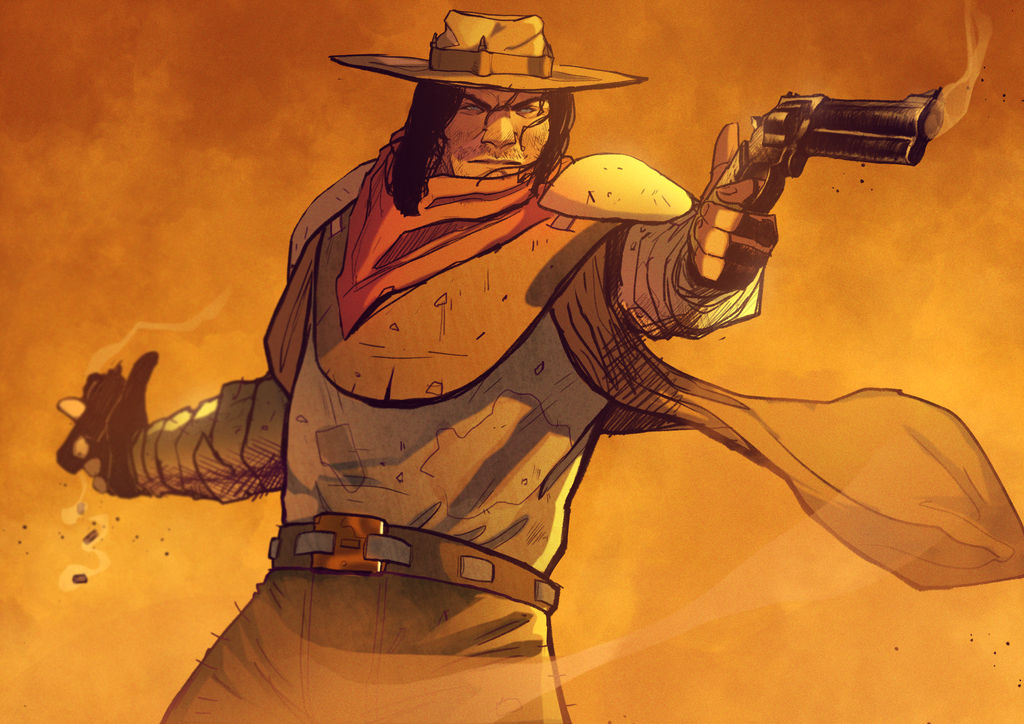 In the future, will we be able to remember our past lives? Or will only the cursed and haunted have this talent? And what on earth – or elsewhere – do these question have to do with cheap beer and guns?

We imagine writer Cody Fernandez drinking beer, using Nerf guns against action figures, and otherwise having a thoroughly good time writing Jack Irons: The Steel Cowboy. There is more than a little influence of the zany science fiction of British publisher 2000AD in this story. The title character, Jack Irons, is for most of the story seen swilling booze in a deadbeat bar called “Cody’s”, clearly set in some sort of future. Aliens or mutants also inhabit the bar, and Jack himself rides about on a motorcycle pulled by two robotic ponies. The story concludes with a firefight involving some sort of law enforcement “borg” (a robot wearing a bandana, no less, and seen in the background earlier in the story, also nursing a drink). Jack recounts his story to a silent barfly, who is wearing a trucker cap, is slightly alarmed by the uninvited conversation, and is showing way too much arse above his trousers (perhaps an amusing stand-in for the reader). A purple, shirtless, humanoid alien seems to be passed out at the far end of the bar. You can almost smell the beer as you take a first read of this issue. There is nothing here that has not already been seen in Dan Abnett’s Jack Wardog, published by 2000AD.

Or is there? Jack’s actual monologue takes us from a Hitchhikers’ Guide future to something more akin to the story Brief Lives from Neil Gaiman’s The Sandman (Vertigo Comics, 1989-1996). Jack, it seems, has “2000 years of memory and 250 years of life”. We are guided through three poignant, even philosophical flashbacks, each concluding with Jack’s death:

1. Jack, in prehistoric times, as a small boy working in a maize field, watching his mother murdered by a raiding horseman and then suffering his own decapitation;

2. in Erechtheid or Melanthid Athens, as General Lionus, wrestling the son of the king in an honour duel, accidentally killing the spoilt prince, and finding his own head on a pike;

3. as a Native American boy called Light Hawk in 1778, taking sides with his uncle in a dispute with his father over whether or not to exchange land for goods with Europeans. Light Hawk joins his uncle and is taught English by Henry Rodgers…. but this adventure, too, ends early with the deaths of both Rodgers and Light Hawk. A crow picks at Light Hawk’s corpse. “Please listen to him, Father,” pleads Light Hawk at one point. “I don’t ever want to die.” And yet he does, over and over again.

The Borg identifies Jack has having a “mutation” which we assume is the reason why Jack repeatedly resurrects. It is not a new concept by any means (the aforementioned Mr Abnett used the same concept for Resurrection Man for DC Comics in 1997). But it is unique as a backdrop for a goofy science fiction story.

Juan Luis Borges’ dictum on using only one fantasy element in a story has been used for target practice in this title. But if the swirling melange of themes is too heady a brew, some of the lines within the writing are like fine whiskey:

“I’ve learned three things… all things are endless. Tenacity gets you through anything. And ain’t no harm having a healthy sense of the dramatic.”“Strength comes from testing ourself against the strong – not from beating the weak.”

Even this throw-away, funny line is impressive:
“This is for my favourite card table. I hardly got to know it.”
Mr Fernandez has used a shotgun when he should have used a sniper rifle. But he has nonetheless hit his target. Jack Irons: The Steel Cowboy #1 is a frothy, fresh start to what we hope is a long-lived series.

This title is an Indiegogo project – please follow the link for more information.