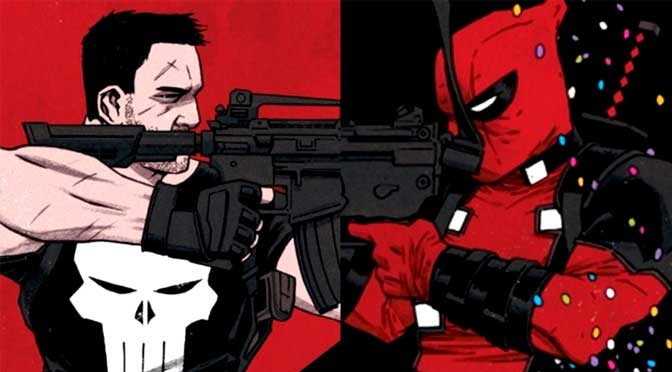 Some comic book readers may be tempted to avoid the new crossover miniseries “Deadpool Versus The Punisher” purely on principle. The blatant commercial opportunism in the concept does not suggest any quality. On its track record, American comic book publisher Marvel Comics’ fondness for creatively bankrupt cross-franchise events does not inspire confidence.

The fact that the two central characters in this title have very recently seen an increase in popularity outside of comic books (the Punisher appeared in the “Daredevil” Netflix television series and will soon appear in a standalone television series: American actor Ryan Reynolds’ hilarious portrayal of “Deadpool” has attracted a new generation of fans) lend further credence that this comic is nothing but an attempt to leverage both brands for a quick buck.

And so, surprisingly, there is a well-written story underpinning “Deadpool Versus the Punisher” #1 that actually justifies the appearance of both Deadpool and the Punisher in a single story. Even a jaded reader of American superhero comic books should find this first issue interesting and worth following.

One of the first things to note in the comic is that the eventual confrontation between Deadpool and The Punisher actually make sense. There is no need for a “mind control” plot premise to set the tone for confrontation, or that other tiresome classic, the mistaken identity plot device. The Punisher is a vigilante with an obsessive and extremely violent vendetta against criminals that frequently put him at odds with superheroes. Deadpool is a mentally unstable mercenary who would accept work from criminals as easily as he would save a cat stuck on a tree. It does not take much to set these two against each other, and there is no altruism or moral compunction usually prevalent in the super hero genre which would prevent either one from resorting to violence immediately.

The setup so far is straightforward. The Punisher’s eternal crusade against criminals leads him to a retired hedge fund manager who secretly operates a billion-dollar international money laundering business. The story refreshingly shows some forward-thinking on the part of the Punisher, in the sense that he is showing a little bit of restraint and going after the money trail, as opposed to just gunning down street level thugs until he attracts the attention of the big bosses.

The kink in the Punisher’s plans is that the retired hedge fund manager, referred to as “The Bank”, is a long-time client and personal friend of Deadpool. Amusingly, Deadpool shows genuine affection for Banks’ family, particularly Banks’ young son who has grown up to idolize his “Uncle Wade” (“Wade” is Deadpool’s real name.) When the Punisher mounts his attack on The Bank’s estate, he manages to cut a bloody swathe of carnage among The Bank’s henchmen and family help, only to be pushed back by Deadpool. Interestingly, Deadpool is depicted as initially reluctant to get involved for free, and because he considers it unnecessary given the number of bodyguards present – until the Punisher manages to dispose of them all.

Given that the Punisher is just a highly-trained athletic human with exceptional munitions expertise while Deadpool has actual super powers on top of his mercenary training, it is not surprising that the confrontation eventually went in favor of Deadpool. But not before a car bomb managed to kill The Bank’s wife and son while giving the Punisher enough cover to escape.

Here, we have to praise writer Fred Van Lente’s deft, sensible handling of the Deadpool character. These past few years, too many writers have become so enamored of Deadpool’s ability to break the fourth wall and self deprecating humor that they end up focusing mostly on telling gags and criticizing comic book cliches, with the authorial requirement of a good story being relegated to the sidelines. The end result of this trend is that Deadpool has devolved into a joke character, and became difficult to weave in cross-franchise events without dragging the entire story into parody.

In this comic, Mr Van Lente retains Deadpool’s acerbic wit and sense of humor. But the character uses it from within the bounds of the narrative as opposed to indulging in cracks at, say, the comic book industry (which, frankly, have become as cliched as the cliches it makes fun of.) But in this issue, the portrayal of Deadpool is subtle. It is far removed from being annoying.

The comic also remembers to show readers that Deadpool is not a random thug that relies exclusively on his weapons and fists. In this case, Deadpool tracked the Punisher down by realizing that there must be some overlap in how they source their highly specialized ammunition. And so Deadpool manages to track the Punisher’s hideout and, amusingly enough, burglarizes it as a joke before ambushing the wounded vigilante. Deadpool admits in dialogue that he is doing the work for free, in revenge for the Punisher’s murder of his friends.

But we do get a cliffhanger before their violent showdown: the Punisher explains that he needs The Bank alive, and that the car bomb was not part of his modus operandi, which means that he is being set up.

We have to admit that we were trigger-happy, and prepared to write “Deadpool Versus The Punisher” off. But we are pleasantly surprised that the comic manages to be a worthwhile read irrespective of the notoriety of the characters. It is actually one of the rare examples in recent times of how to write a “Deadpool” story that is not just another example of a writer and editor jumping on the “Deadpool” meme factory bandwagon in order to sell more comics.