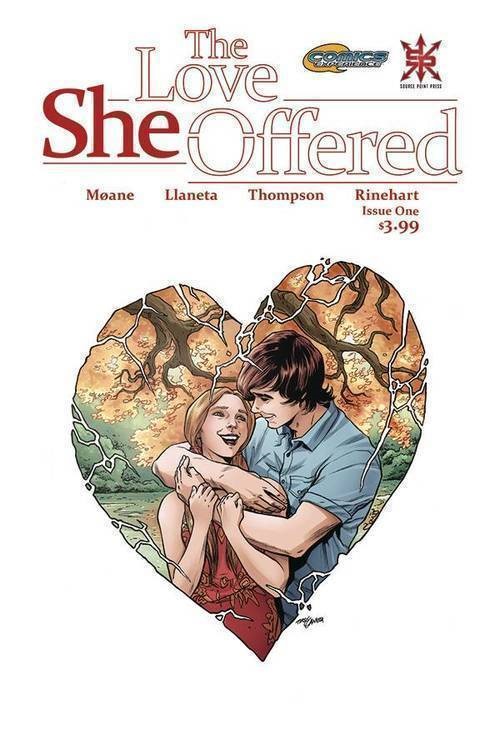 Martin Amis’ novel London Fields has a pastoral title, but is concerned with murder, theft, betrayal and other dirty deeds in 1980s London. Do not similarly be fooled by the romance-themed title and cover art of The Love She Offered, by writer Glenn Møane and artist Tirso Llanetta. This is a crime story, fuelled by revenge for a murder, violence, and torture, all spiralling out of control within the first issue, and becoming a bloody catastrophe by the last. We normally have no hesitation in spoiling a story for the purposes of a critique, but for The Love She Offered, this one is too good to spoil.

The creators have been very clever in the methodology used to increase the stresses between the cast. The comic consists of scenes along the lines of Quentin Tarentino’s motion picture Reservoir Dogs: pressure cooker tension arising from the claustrophobic environment. A handsome teenaged boy named Sean is abruptly beaten and thrown into a car by a thuggish man named Earl and a slighter type, named Ross, wielding a baseball bat. The boy is taken into a cabin in a remote location where he is bound and left on a floor. A man named Brian Thompson, Earl’s older brother, arrives. Brian’s daughter Julia has been knifed and has died. And Brian believes that Sean is responsible.

The startling aspect of the story is the dialogue. The characters sound very true to life. Sean initially promises to keep quiet if he is released, and then starts to rattle the cages of his captors, first playing mind games with Earl, and then derisively laughing about how the men will all end up in jail.

The kidnappers eventually realise that the teenager is not going to be as easy to crack as they assumed – Brian, in particular, is desperate but driven, and the tension between wanting truth and engaging in a kidnapping start to show in his voice. Ross calls in a favour from a shady friend who puts them in touch with a “specialist”. We initially see the specialist only from behind in the first issue. The man is a thug, looming over his intimated teenaged son, a pregnant wife, and a young baby. A piece of leather – a belt? – is wrapped around his fist. It is a deeply unsettling scene.

Mr Llanetta renders the characters with skill. Sean is a pretty boy with high, symmetrical cheekbones and good hair: Ross is oddly not what you would expect given his personality and the secret he hides. The perspectives of the interrogation of Sean give the reader the uncomfortable intimacy of being a party to it, part of the closed system bringing the story to a sustained boil. In the third issue, the exchanges between the main characters are like wildly swinging punches, and Mr Llanetta cleverly follows the action from high impact perspectives and angles. And when the action suddenly slows, and the truth is delivered in a hesitating, addled voice, it is as if as a reader you could hear a pin drop. A silence descends. Some of that effect is because of the use of a monologue, but Mr Llanetta and his panel layout is mostly responsible. It is an uncanny scene.

This comic series is extremely well-crafted, bringing with it a sense of dread. The men interrogating Sean are grief-struck and seeking justice – they are not inherently bad. Brian’s dire motivations are understandable to anyone who has a child. The impression a reader gets from the progression of the story is that the characters are rats in some ghastly experiment, caught in a maze as the temperature slowly rises and becomes oppressive. Bad judgement calls under pressure, screaming matches between the participants, desperation like an oppressive blanket. The villain is not who you think. And the etymology of the title is startling.

This is a tight, flawed, chilling quest for justice which spirals down and deep, with the cruel hook that the justice everyone seeks is barely delivered. It would not surprise us at all if this very clever, spellbinding comic became a motion picture.