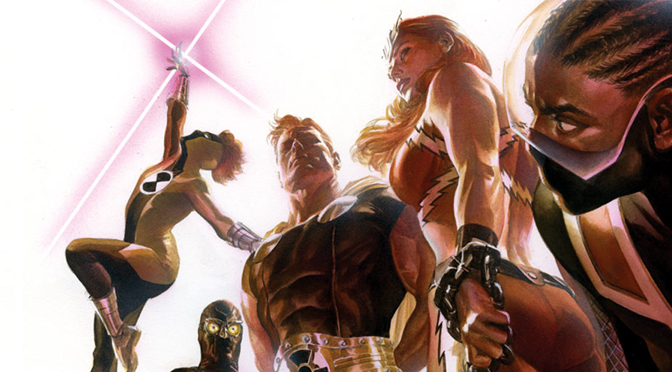 It is safe to assume that US publisher Marvel Comics, flush with cash as a consequence of its purchase by entertainment giant Disney and buoyed by the success of the motion pictures based upon its characters, has the strategic goal, with the sheer number of title relaunches, reboots, and new series debuts in 2015, of attracting a new generation of fans.

Convoluted comic book continuity is a barrier to new readers. Targeting those who are not burdened by decades of comic book continuity and familiarity is a particularly good thing in the case of Squadron Supreme #1. (An indicia that Marvel Comics has placed some faith in this title is the painted cover by Alex Ross, a popular artist who is not afraid to ask for substantial sums for cover art.)

The story is set after the events of “Secret Wars”. “Secret Wars” was a continuity-based event designed by Marvel Comics to drive sales through cross-promotion. The hook to readers was to mash Marvel’s mainstream continuity in with several other alternate realities. This consolidation of realities was called “Battleworld”, the name itself plainly suggesting what was to happen amongst its denizens.

“Squadron Supreme” is a title consisting of a team of characters, who for the most part are “homages” to characters owned by DC Comics. Marvel Comics has toyed with these characters in various guises over the years, without much commercial success beyond a twelve-issue series penned by writer Mark Gruenweld and which was published in 1985-1986.

The plot of this first issue establishes the theme of this latest iteration of the characters. The characters making up Squadron Supreme are angry after losing their respective worlds in the “Secret Wars” event, and they want to do everything they can to protect their new world from perceived threats.

Squadron Supreme pick Namor as their first target. “Namor” is a character property of Marvel Comics, the creation of which dates back to World War 2, and is the mutant king of the undersea city of Atlantis. The in-story rationale to this decision is that:

a.) Atlantis has invaded the surface world in the past. This, in a chain of logic which should properly be described as “Rumsfeldian”, means it is a threat;
b.) Namor was responsible for the destruction of the world where one of the Squadron’s members, Doctor Spectrum, hails from. Vengeance is the motivator, rather than the usual superheroic altruism. There are shades of Mark Millar’s “The Authority” (2000) in the idea of a group of powerful superhumans striking a sovereign nation in revenge for genocide.

Most of the issue is spent on the Squadron fighting against Namor and the army of Atlantis. It is shamelessly similar to one of DC Comics’ plots contained in the title “Injustice: Gods Among Us” (April, 2013), down to the strategy of forcibly relocating Atlantis to the surface. Together with the fact that the members of Squadron Supreme are pastiches of the Justice League, the informed reader starts to wonder whether Squadron Supreme #1 is merely referencing or is outright engaging in copyright infringement of a plot from DC Comics.

Thankfully, the story changes course in the middle of the fight scene. Atlantis is destroyed by the Squadron’s erstwhile leader Hyperion and Namor is gruesomely decapitated by Hyperion’s eye beams. The Squadron subsequently explain their actions through a message broadcasted worldwide, and promise to protect the world using their own violent brand of justice. The issue ends with a team of characters forming one of many current teams of The Avengers deciding to put a stop to the Squadron. Confrontation between the characters is thereby promised in the next issue.

It is hard to judge the quality of writing for this issue. Mr Robinson, the writer, is by his curriculum vitae manifestly creatively talented. He can plainly by experience formulate a good action scene, and has an extended and interesting battle laid out in this issue.

But there are not many original ideas in the comic:

a. the Squadron’s motivation to destroy Atlantis and its ruler is rushed, flimsy, and poorly articulated in the plot;

b. the edgy attitude of the characters is a tiresome resort of writers trying to inject violent appeal into stale character properties;

c. the death of a popular character as a way of rendering the title significant no longer fools the average punter. New readers might not have enough emotional investment in the character to be affected, while old fans will not be shocked because they know Namor, a significant character in Marvel Comics’ character pantheon, will inevitably be back.

The critical and commercial success of the title “Uncanny X-Force” (2010-2012) with its “ends justifies the means” manifesto may be the inspiration for this book. But the writer of “Uncanny X-force”, Rick Remender, took care to laden that title with intelligent nuance – there are diatribes on the nature v nurture debate; a touching scene on the nature of childhood; and most importantly the characters are plagued by doubt and poignant regret as to the morality of their kills so as to cause one of them, the ultraviolent Wolverine, to eschew murder. Mr Remender took much care in “Uncanny X-force” to both balance out and to contextualise the violence. Mr Robinson seems to have missed this in scripting “Squadron Supreme #1”. The destruction of a city by superhumans and the decapitation of a foe offers cheap thrills, but no thought.