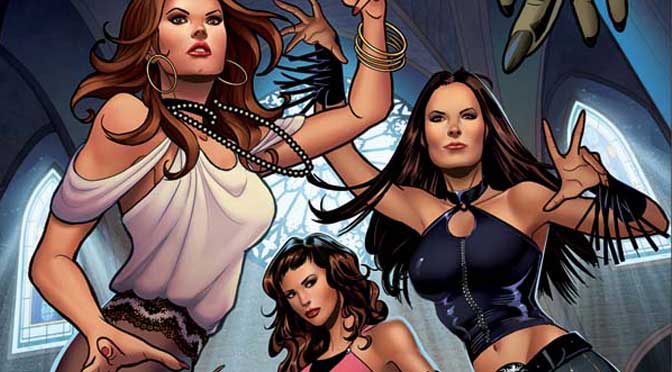 Much has been made in the past fortnight of the twentieth anniversary of the launch of the US television series “Buffy the Vampire Slayer”, a groundbreaking production in respect of its feminist lead and its liberal attitudes towards homosexuality all set in a Californian high school environment. “Buffy the Vampire Slayer” is still the subject matter of a line of comic books.

A later thematic cousin to “Buffy the Vampire Slayer” is the television series “Charmed”, which was broadcast from 1998 to 2006. “Charmed”, like “Buffy the Vampire Slayer”, was a supernatural action series, but was even more feminist in its themes. It featured three characters known as “The Charmed Ones”. These were sisters Prue, Piper and Phoebe Matthews. A long-lost half-sister, Paige, played by actress Rose McGowan, replaced Prue in the triumvirate when actress Shannon Doherty departed from the production at the conclusion of the third season.

The three characters were witches, and they used their magical powers to fight (male) warlocks and demons in San Francisco. The television series was exceptionally popular, and remains so thanks to television content providers such as Netflix.

This first issue of “Charmed” requires no almost background to be followed by a new reader. It is a commendable entry-level issue. The three sisters find themselves torn, as usual, from their ordinarily lives and jobs to fight a demon named Charun who has been granted the power to replicate astral projections of himself. The demon is rapidly dispatched by the sisters and he returns to the underworld, where he is brutally punished for his failure by his overlord.

Out of nowhere appears a band of warlocks. The warlock leader offers a treaty of sorts to the demon lord. The problem in defeating the Charmed Ones, the warlock observes, is that the antagonists have not utilised human souls, and have not exercised patience.

The warlock master also offers the creation of a portal into the human world, which apparently will be situated in a Jackson Pollack-style painting being rendered by one of the sisters. The first stage of their new strategy is to steal the soul of Paige’s accountant, and animate his body. The accountant’s soul is depicted as trapped in a barred cave in the underworld. Such are the hazards of book-keeping.

Outside of the world of Wiccan sorcery, there is the usual tension of keeping up jobs and relationships counterweighted against protecting the world, a knife-edged balancing act first perfected in the American superhero genre by Stan Lee in the pages of “Spider-Man”. One of the sisters is in the process of being elevated within the hierarchy of the newspaper in which she works. The interview process is disrupted by being “orbed” (magically teleported) away to duty, with the inevitable conclusion of jeopardising her job prospects. Another struggles to make her small business work. The third is coaching a ward, a young witch named Shania, who is apparently the archetypal impetuous and difficult teenager. The attraction of the concept is that mix of the mundane, everyday problems faced by and shared with the readership, intertwined with the threats of extraordinary and evil.

There is even a respectably good monologue in this issue. Contemplating the prospect of the portal opening through the yet-to-be completed pairing, the warlord leader wryly notes, “You see, in art, there’s always something for everyone.”

The writer, Erica Schultz, has found distinct voices for the characters, a difficult thing within the parameters of any franchise of characters licensed for comic book publication. We do not wish to overstate the quality: this is not of the same level of craftsmanship as, say, the impeccable Kelly DeConnick or other contemporary writers who are voicing strongly feminist messages. But there is enough skill here so as to result in a creative output which should appeal to more than the core fan base.