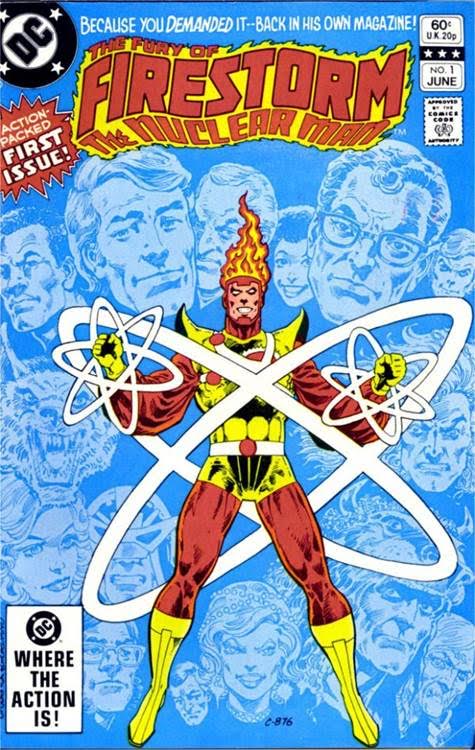 It is odd to think of the young, likeable senior high school student, Ronnie Raymond, becoming forty. What happened to him after he left school? Did he, say, become a waiter in a New York restaurant, eventually becoming the restaurant manager as his hair went grey and his stomach filled out? Or perhaps did he go into marketing and move to Chicago, where he dyed his hair and engaged a personal fitness trainer to stay trim? Or did he just forever remain the powerful, wise-cracking Firestorm the Nuclear Man, a superhero from American publisher DC Comics?

Which high school love interest did he marry – Lorraine Reilly or Doreen Day? Or, as repeatedly suggested in the 1980s in the pages of Justice League of America (the superhero team of which Firestorm was a member for much of the 1980s), did a romance eventually bloom with Superman’s alternate universe cousin, Power Girl? Would Ronnie’s children have gained his powers? Or by reason to his massive exposure to radiation in his origin story, was he sterile and unable to sire children? Did Ronnie suffer from male pattern baldness, and if so, did this manifest in Firestorm’s blazing head, such that only the sides and rear of his skull would writhe in fire, leaving the top a shiny pate? Or did he suffer the same fate as his Marvel Comics’ doppelgänger Nuke (a member of the superhero team, Squadron Supreme), and die from cancer in his twenties, a consequence of his life as a radioactive superhero?

Firestorm was a fusion of two men, Ronnie Raymond and Professor Stein, melded together in a nuclear accident. Ronnie would will Firestorm into existence, and Stein would disappear from wherever he was, leaving behind only some enormous electrons circling around some loose, gigantic atoms in a 1980s misconception of particle physics. (Romance with a third party was always a complicated thing which the title’s stories avoided.) What would have happened to Firestorm when the much more elderly Professor Stein eventually died? Would the triggering of Firestorm by Ronnie drag Stein out of his grave, so as to form The Nuclear Zombie (a variation of what happened in the storyline for In Blackest Night) ?

In the world of franchised comics, none of this happened. Firestorm the Nuclear Man can age no more than Batman, Mickey Mouse, or Bugs Bunny. But Firestorm is indeed forty this year. Indeed, for those of us who grew up in the 1980s, it is with some horror to note that it has been forty years since the character’s creation.

March 1978 was the year Gerry Conway, one of the creators of Firestorm, conceptualised the character. Mr Conway has a small history of fire-themed superheroes: he had previously created Firelord for DC Comics’ competitor, Marvel Comics. Fire is a potent and perhaps the most ancient representation of power to the human subconscious. Reading about the adventures of a high school student wielding fire and being able to transform inorganic things at will is a compelling teenaged power fantasy. And, because the primary audience was indeed teenaged boys, Firestorm even eventually gets a slightly older nuclear girlfriend, named Firehawk (Lorraine Reilly).

But in addition, there was the dynamic between Ronnie Raymond and Professor Stein. In an interview for Newsarama in 2015, Gerry Conway described what he saw as the appeal of the character:

How I Learned to Stop Worrying and Love Puffy Sleeves

The history of Firestorm’s publication very much mirrors global concerns around the safety of nuclear reactors. Firestorm the Nuclear Man was exactly one year ahead of its time. March 1979 saw the Three Mile Island Incident, whereby a nuclear power plant in Pennsylvania suffered a partial and almost catastrophic meltdown as a consequence of valve malfunction and human error.

And so, with sudden public concern about the dangers of atomic power, by September 1980 Firestorm was back in publication, appearing in back-up stories in The Flash #289-304. This lead to an ongoing series, called The Fury of Firestorm, which ran from 1982 until 1990.

In April 1986 the Chernobyl nuclear accident occurred in what was then part of the Soviet Union. And so, again tapping into the zeitgeist, August 1987 writer John Ostrander had re-jigged the concept: a Soviet superhero was now fused into the character, and it had been re-rendered into a fire elemental (a mirror of the success of DC Comics’ plant elemental, Swamp Thing). The Soviet character, Mikhail Arkadin, is described as a victim of the Chernobyl nuclear disaster. By way of the accident, Arkadin gained control of all-consuming flame but needed to wear a protective suit to survive.

In 2004 another revival involved a different teen taking on the mantle, named Jason Rusch. Again, the zeitgeist was in action: 2004 was the year Iran sought to postponed nuclear inspections by the International Atomic Energy Agency and also when the US Central Intelligence Agency’s Iraq Survey Group concluded that there were no and had never been nuclear weapons in Iraq.

The character appears on the television show DC’s Legends of Tomorrow, but presently has no ongoing comic book title. With concerns about North Korea’s nuclear capability firmly in the minds of the global community, history suggests a comeback for the character.

Happy 40th birthday, Firestorm. We hope that on some parallel Earth you are enjoying a birthday drink with Lorraine Reilly on a porch in an anonymous American suburb, watching your flame-headed toddler running about on the lawn, and telling him or her off for scorching the cat.