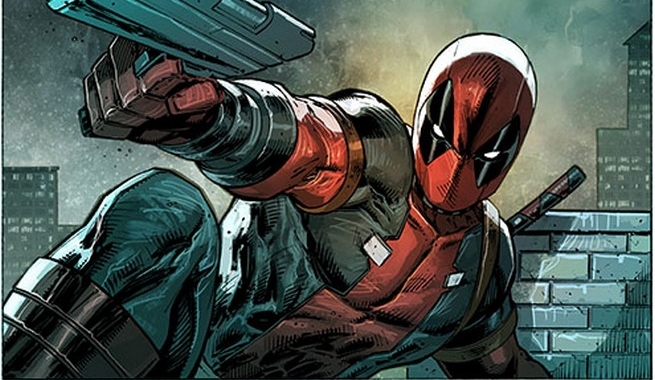 There are two common (and easily-corrected through a rapid Google search) misconceptions about US publisher Marvel Comics’ very popular character property, “Deadpool”. First, that the character was created by artist/writer Rob Liefeld, a man who was both prolific and controversial for his writing and art during the 1990s. The second misconception is that Deadpool is a thinly veiled copy of the villainous “Deathstroke the Terminator”. This character, a cunning and murderous mercenary, is owned by Marvel Comics’ main competitor in the super hero genre, DC Comics.

The truth is somewhat different. While Mr Liefeld purports that he “drew inspiration” from the DC Comics character, the similarities are superficial at best. Writer Fabian Nicieza played up the similarities during the character’s creation, in that he gave the character the name “Wade Wilson”, a play on Deathstroke’s name, “Slade Wilson”. Mr Nicieza fleshed out Deadpool with its own distinctive character. This means that Mr Nicieza, on a fair analysis, was the creator of everything comprising Deadpool that was not mined from DC Comics’ Deathstroke. In that sense, Mr Nicieza was the actual creator of Deadpool.

This original version of Deadpool is tonally very different from what contemporary comic book and motion picture fans recognize today. The contemporary version of Deadpool is a lampooning assassin with a mental disorder which serves as a vehicle to allow the character to directly address the audience. This outlandish black humour underpinned the success of the 2015 motion picture.

Deadpool’s 1990s roots are laid bare in this new title, “Deadpool: Bad Blood”. It draws heavily from the character’s earliest, decidedly drier adventures. The writing duties in the comic book are shared by Rob Liefeld and the duo of Chris Sims and Chad Bowers. Mr Sims and Mr Bowers have demonstrated a remarkable ability to nostalgically evoke a curious charm inherent in the 1990s-era mutant superheroes, the X-Men, in the pages of Marvel Comics’ title “X-Men ‘92”: their involvement in this project is purposeful.

The choice to write a Deadpool story using the character’s original tone could be a selling point or a negative, depending upon the readership’s preference for the modern version of Deadpool popularized by the live action film. Mr Liefeld’s and Mr Nicieza’s 1990s “Deadpool” was wisecracking and somewhat annoying, as opposed to mentally unstable and outrageously funny. Digging into the character’s thematic past makes for a “Deadpool ” story that is not bogged down by cliched superhero genre in-jokes and fourth-wall breaking gags. But it erases the self-conscious, comic book industry-lampooning humor that contemporary fans love about the property.

To their credit, the writers of “Deadpool: Bad Blood” manage to insert several effective jabs at 1990s-era American comic books. Following the lead of Frank Miller’s 1986 epic superhero story, “The Dark Knight Returns”, there was in the 1990s an industry-wide over-reliance on the gruff, teeth-gritted, perpetually angry antiheroes with a sartorial fondness for low-slung belts, ammunition pouches, and holstered guns. This title mocks that cliche which Mr Miller popularised amongst 1990s creators. And as further proof that the comic is geared towards old(er) fans of the property, this graphic novel devotes ample page real estate to the obligatory superhero fight replete with ridiculous limb-flailing, mid-air poses, and hyper-violence.

Unfortunately, the novelty of revisiting a simpler, more narrative-friendly version of the Deadpool character is hobbled by a paper-thin plot full of elements borrowed from other action yarns. Here we have Deadpool looking for a “super weapon,” only to be blocked and “killed” (the character’s regenerative abilities basically make him unkillable) at every turn by a mysterious, hulking assassin called “Thumper.”

Deadpool completely missing the obvious – that “Thumper” is the super weapon – is not surprising given Deadpool’s characteristic lack of focus. But the plot twist is that Thumper is an old highschool friend of Deadpool. This is disingenuous and pulled completely out of thin air. In addition, many of the central characters are mere props with no purpose or proper backstory, except those that are clumsily provided through dialogue – it is embarrassing to see the character Garisson Kane introduce his backstory while fighting and explain his importance by boasting that he is “the guy they picked to replace [Marvel Comics’ highly popular mutant tough guy] Wolverine.” The lure of 1990s “grim ‘n’ gritty” kitsch can only go so far before it triggers a series of cringes.

In summary, there is value to be found in “Deadpool: Bad Blood”, particularly for fans of the character’s early adventures in the hands of Mr Liefeld. For all of the criticism Mr Liefeld receives from the superhero genre’s audience, he would not be as successful as he was if his works did not generate that audience. This title will also appeal to those harbouring the dirty little secret of enjoying both stories overflowing with flashy, pointless fight scenes, and walking action hero cliches with the creative subtlety of an ice hockey stick in the teeth. Unfortunately, these meagre positives would have had trouble justifying a 24 page comic book, much less a 90-plus page graphic novel.