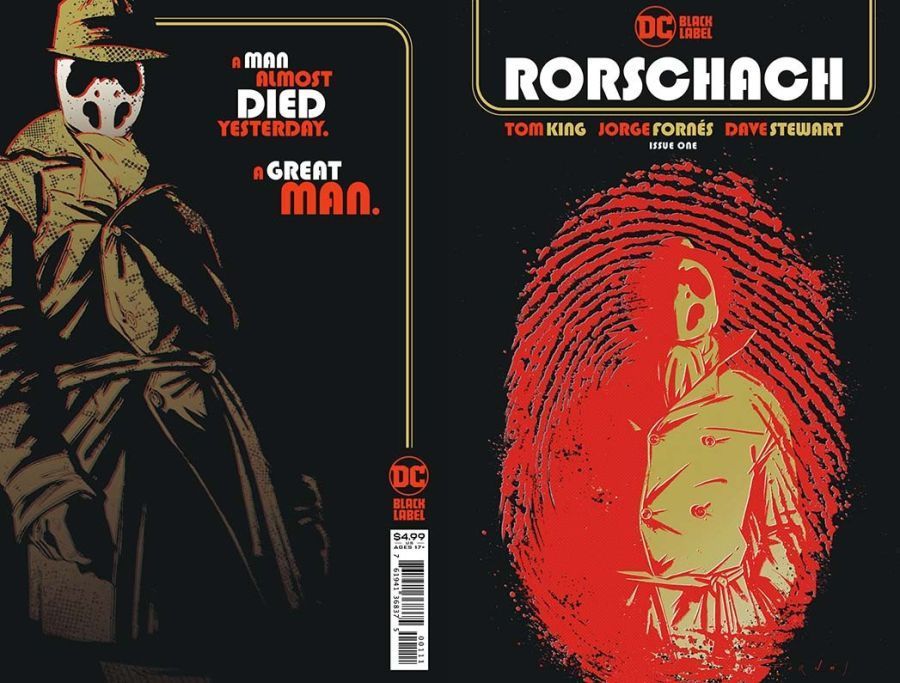 October 13th of this year saw the release of Rorschach #1, the latest in a series of comics based on Alan Moore and Dave Gibbons’ seminar work Watchmen. This book is remarkable, however, in that it is not part of an event like American publisher DC Comics’ previous mediocre attempts at expanding the Watchmen universe were – although, interestingly, it apparently does take place in the same universe as the HBO Watchmen series that premiered last year.

As this topic has already been covered to great length on our website, I will not discuss the morality of writing comics based on Watchmen. The character of Walter Kovacs, also known as Rorschach, does need a bit of an introduction. It is not only one of the most prominent characters in the book, it is also the most controversial and misunderstood one. In the original Watchmen comic, Rorschach was depicted as a mentally damaged, justice-obsessed, bigoted objectivist created as a parody of classic superhero artist and creator Steve Ditko’s Randian heroes Mr. A and The Question. Rorschach’s inability to compromise even in the face of certain death ultimately caused his demise. Rorschach existed as a cautionary tale about comic-book vigilantes and their obsession with justice, criticizing the black-and-white morality of these characters by being, essentially, a morally grey anti-hero.

Alan Moore, co-creator of the character, has in an interview said this about Rorschach:

“I wanted to kind of make [Rorschach] like, ‘Yeah, this is what Batman would be in the real world’. But I had forgotten that actually to a lot of comic fans, that smelling, not having a girlfriend—these are actually kind of heroic! So actually, sort of, Rorschach became the most popular character in Watchmen. I meant him to be a bad example. But I have people come up to me in the street saying, “I am Rorschach! That is my story!’ And I’ll be thinking: ‘Yeah, great, can you just keep away from me, never come anywhere near me again as long as I live’?”

From then on, the character’s popularity has grown, and perhaps for all the wrong reasons. The film version of Watchmen by director Zack Snyder depicted him as a much more heroic character, stripping him of his most glaring issues and framing him not as a mumbling psychopath, but as a considerably more appealing Punisher-type character that dies a tragic, meaningful death. The otherwise forgettable Before Watchmen prequel focused on the character seemed to follow on Mr Snyder’s steps by glorifying his most violent actions while attempting to make him more sympathetic, which is not bad in and of itself but it does raise some questions about whether or not the creative team understood what the character stood for in the original book.

Doomsday Clock does not feature the original Rorschach, as Geoff Johns decided to (thankfully) not bring the character back from the dead. Instead, the Rorschach in Doomsday Clock is a young black man that is trying to follow on the footsteps of the original Rorschach. While this sounds like a promising set-up for such an interesting subversion or deconstruction of Kovacs’ legacy, Mr Johns completely missed the mark by having the new character cut ties with the original Rorschach not because he was a dangerous, blood-thirsty bigot, but because he indirectly caused his parents’ divorce. This was disappointing and generic to say the least. Perhaps the only version of the character that retains the essence of his original depiction is, ironically, the one where there is not a single character called Rorschach. The HBO show brings Rorschach’s legacy back in the form of the 7th Kavalry, an alt-right terrorist group that uses Rorschach’s notorious journal (a narrative vehicle in the Moore and Gibbons’ text) as a sort of creed – although admittedly the members of the group do take his quotes out of context to make them fit their agenda better, something that is known to happen in real life with alt-right conspiracy theorists (see for example the infamous QAnon).

The book opens in medias res, with the death of a character wearing a Rorschach costume. We soon learn that this character has attempted to assassinate the conservative presidential candidate running against Robert Redford, and that both him and his partner were shot dead before they could perform the assassination. We follow the steps of an investigator trying to determinate the new Rorschach’s identity. Facial recognition is out of the question.

During the course of the story, the investigator finds out the attempted assassination was most likely performed by William Myerson, a former comic-book artist that created a popular pirate character in the 60s. It is important to understand that, in the world of Watchmen, pirates occupy the same cultural spot superheroes do in our reality, as the appearance of real-life heroes pushed comic-book publishers towards pirate stories instead. This detail, along with a few more sprinkled through the issue, makes it kind of obvious that William Myerson is this world’s equivalent to Steve Ditko.

Instead of being an objectivist, however, Myerson is described as the polar opposite. Myerson is a left-wing fanatic that never left his home once he stopped writing comics, and for most of the issue it is heavily hinted that this man is the new Rorschach, both by the characters and the implications of his beliefs. Tom King said in an interview with syfy that his Rorschach’s morality is not based on Ayn Rand’s beliefs but on her contemporary Hannah Arendt’s ideas.

“Instead of it being from an Ayn Rand background, I transitioned it just to sort of respond, and I made [the contemporary Rorschach] obsessed with Hannah Arendt, who is a different philosopher, Ayn Rand’s contemporary, another Jewish immigrant from Germany, but on the left, not on the right, who was obsessed with the concept of citizenship,” King explained. “She had been in a concentration camp, and how we as a free society stop another Nazi rising was sort of her obsessesion (sic) of her whole life. Instead of constructing Rorschach from a Randian point of view, if we construct him from an Arendt point of view, how does that change our conception of superheroes, and our conception of vigilantism? If we go from the idea of ‘it’s obviously bad to kill people without trials’ to ‘Is it bad to kill Nazis without trials?’ it makes a different moral universe and [asks] different moral questions, or at least the same questions but, you know, turning the ball on its side so you can see it from a different angle.”

Disappointing as it may be (and ignoring the fact that Hannah Arendt was married to a member of the Nazi party and was opposed to killing Nazis even with a trial), this means that Mr King has created a pseudo-leftist version of Rorschach in his attempt to “see the character from a different angle”, instead on deconstructing the original character’s cultural legacy. Perhaps he is planning on doing this still, but I can not help but feel a bit disappointed by his very simplistic take on the “both extremes are bad” mentality.

The issue ends with the revelation that the body’s fingerprints match those of the late Walter Kovacs. This is extremely confusing, more so after the whole issue’s obsession with Myerson and his political ideas. But this is Tom King. Mr King may very well slap us in the face with an actually subversive idea in the next few issues, or he may add yet another disappointing, centrist version of the character that brings nothing new to the table.

Looking on the bright side, Jorge Fornés art is no doubt the highlight of the issue. The Hispanic artist has stated before that he loves working on noir-style stories. Flawed as it is, Rorschach #1 is very much a noir murder mystery, with the small twist that it focuses on the attempted killer’s death, and not the target’s death. Mr Fornés’ version of Rorschach is probably my favourite in terms of visuals. As much as I love John Higgins’ colours from the original book, Fornés and colourist Dave Stewart (no relation to this website’s editor) offer a much more fitting gritty, but still clean and concise, look.

Regarding the visual style of the book, it is also a breath of fresh air that King and Fornés stay away from the 9-panel grid, which was heavily used in the original Watchmen. Instead of attempting to replicate Moore and Gibbons’ style, they’ve developed their own panel structures. This stays away from the faults of Doomsday Clock and its meaningless, meandering, de-compressed compositions. It opts instead for a much more concise, flexible and detail-focused visual narrative that leaves no room for unnecessary panels or text bubbles: it feels as if everything is there for a reason.

In conclusion, I must say that I am not happy with this first issue of Rorschach. Perhaps this series will improve with time, as a few of Tom King’s works do, or perhaps it will not. Only time can tell, and until them I will be happy with looking at Jorge Fornés’ clean, smooth artwork.