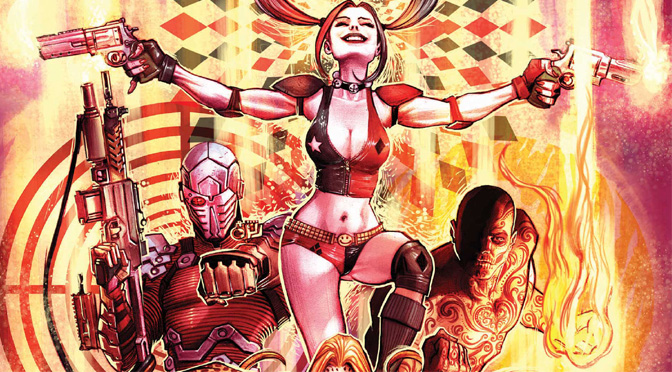 On the back of our recent and very positive review of “Harley Quinn and the Suicide Squad April Fool’s Day Special“, we engaged in precisely the sort of consumer behaviour that US comic book publisher DC Comics wished us to do: we purchased the latest issue of DC Comics’ related publication, “New Suicide Squad”. DC Comics were hoping to ensnare new readers with this sales strategy, but in its execution, offering to new readers such a poorly crafted issue as an entry, the publisher fails entirely.

It is a very far cry from John Ostrander’s version of “Suicide Squad” published in the 1990s. The premise of “Suicide Squad” since that time is that captured supervillains are essentially coerced by the US government into participating in clandestine paramilitary operations. The carrot in this arrangement is the promise of freedom from incarceration, and the stick being a device which will either maim or kill a dissenting supervillain. Originally this started out in Mr Ostrander’s run on the title as an exploding bracelet, but in more recent times has evolved into a subcutaneous explosive device.

The story is entitled “Kill Anything”, and the plot is as sophisticated as that title. A group of religious zealots called “The Fist of Cain” wish, for reasons relating to some sort of odd points system, to sacrifice the Suicide Squad’s leader, Amanda Waller, on an altar. The murder is to be televised to the order’s followers. In the meantime a supernatural being called Rose Tattoo, apparently the “spirit of murder”, is busy knifing and battering a supervillain called the Cheetah. Another supervillain called Diablo then somehow drags Rose Tattoo into hell. An Australian supervillain called Captain Boomerang is gleeefully busy slicing people’s limbs or slashing people’s throats so as to position himself to save the day. A marksman named Deadshot is prevented from fulfilling a deadwish by a boomerang improbably looping a rope around his waist, also conveying a hand-written note with the words, “You owe me.”

In support of this fragile and borderline nonsensical plot, the writer, Tim Seeley, has introduced a chsrscter called “Deathtrap”. This character is a wise-cracking assassin in a red suit. This is a very intentional copy of the character “Deadpool” – a wise-cracking assassin in a red suit – owned by rival US comic book publisher Marvel Comics. The tongue-in-cheek flirtation between Deadshot and Deathtrap is entirely reminiscent of the frequent depiction in Marvel Comics’ publications of Deadpool’s teasing of another Marvel Comics’ property, Spider-Man. Is Mr Seeley purporting to give readers an insight into what it would be like if Marvel Comics and DC Comics had agreed to a cross-license of their respective characters? Or is this an example of the publisher blatantly endeavouring to piggyback upon the success of the recent “Deadpool” motion picture? Either way, the need for this tactic underscores the lack of quality residing in the balance of the content.

The story creaks under the weight of sloppiness. Push lightly and it collapses.